The main difference between Class and Method is that class is a blueprint or a template to create objects while method is a function that describes the behavior of an object.

A programming paradigm is a style that explains the way of organizing the elements of a program. Object-Oriented Programming (OOP) is a common software development paradigm. The developers can model the software into a set of objects and these objects communicate with each other by passing messages. Class and method are two concepts related to OOP. Moreover, a method is written inside a class. 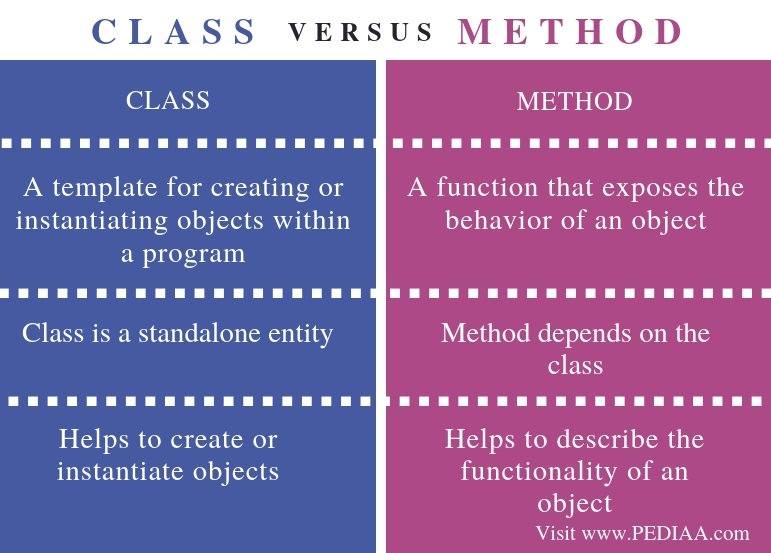 A class is a template that helps to create single or multiple objects. It is not possible to create objects without a class. For instance, to create Student objects, there should be a Student class.  A class contains attributes and methods. The attributes explain the states an object should have whereas the methods describe the behaviors or the functionalities the object should have. A class also has a special method called a constructor to give initial values to the attributes.

The attributes and methods of a class are members of a class. They can have visibilities such as public, private and protected. Overall a class is a logical entity to create objects while an object is a physical entity.

In the above program, Rectangle is a class. It has two private attributes called width and length. The Rectangle constructor helps to initialize the attributes. The class has a method called displayArea which displays the area. There is also a method called main. It denotes the starting point of the execution. Inside the main method, an object of Rectangle is created and value 20 and 30 are passed. Then, the constructor assigns the 20 to width and 30 to length. Finally, the displayArea method is called using the object. It displays the area on the console.

Difference Between Class and Method

A class is a template for creating or instantiating objects within a program while a method is a function that exposes the behavior of an object. Thus, this is the main difference between class and method.

Moreover, a class is a standalone entity, and a method is inside a class. Therefore, method depends on the class.

Another difference between class and method is that a class helps to create or instantiate objects while a method helps to describe the functionality of an object.

Class and method are two concepts in OOP. The main difference between Class and Method is that Class is a blueprint or a template to create objects while a method is a function that describes the behavior of an object.