Home » Geography » What is the Difference Between Delta and Estuary

Deltas and estuaries are landforms with many similarities. Deltas form at the mouths of rivers that carry enough sediment to build outward, while estuaries form in areas where the ocean or lake waters flood up into the river valley. 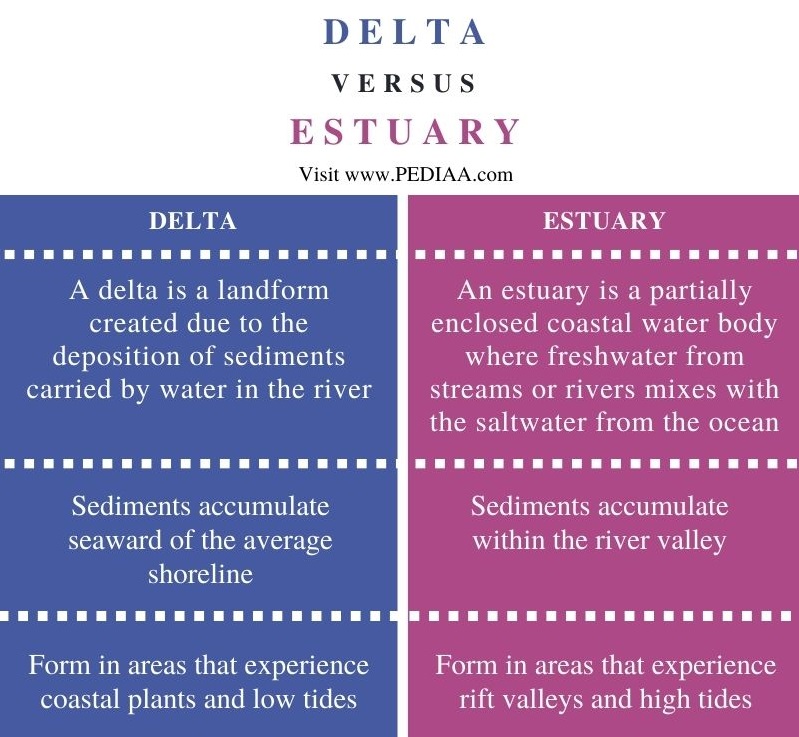 What is a Delta

Delta or river delta is a landform created due to the deposition of sediments carried by water in the river. These landforms form at the point where a river connects to the ocean. This deposition occurs as the river water flow leaves its mouth and enters a slow-moving water region such as the ocean. In addition, these landforms also form at places where the river meet a lake, sea, reservoir, and rarely, another river.

The shape and the size of this deposition depend on the watershed process and the receiving mechanism. The size, geometry and location of the receiving water body also affect the formation of the delta. From ancient times, these rivers deltas have been very important in human civilizations since agricultural lands are always located near the water bodies. Moreover, these landforms are important ecologically since there are a number of different animal and plant species living in these regions.

What is an Estuary

An estuary is a partially enclosed coastal water body where freshwater from streams or rivers mixes with the saltwater from the ocean. The mix of seawater and freshwater results in brackish water, which is somewhat salty but not salty as seawater. Both seawater and freshwater constantly circulate in and out of estuaries. While tides generate the largest flow of saltwater, river mouths result in the largest flow of freshwater. Moreover, estuaries are typically protected from the full force of waves and winds by landforms like barrier islands and peninsulas. 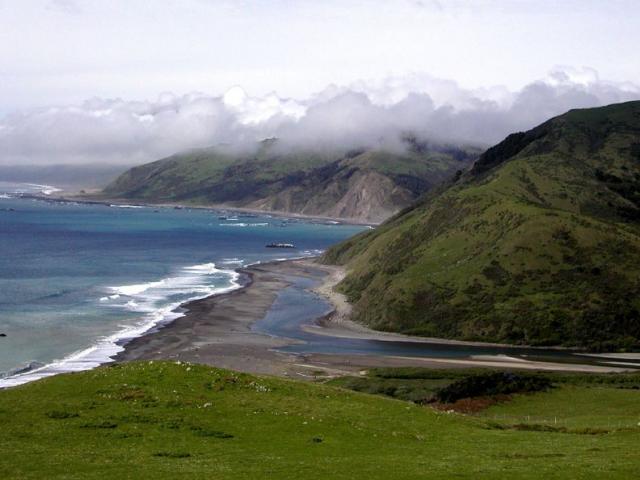 There are many types of habitats in and around estuaries, including marshes, sandy beaches, rocky shores, river deltas, shallow open water, and tidal pools. Estuaries are also home to unique plant and animal species that thrive in brackish waters.

There are four different types of estuaries according to the basis of their formation.

Coastal plain estuaries form when sea levels rise and fill in an existing river valley. The famous Chesapeake Bay in the United States is an example of a coastal plain estuary. California’s San Francisco Bay, on the other hand, is an example of a tectonic estuary. Such estuaries form due to tectonic activity, i.e., shifting together and rifting apart of the Earth’s crust.  Moreover, when a barrier island separates an estuary from the sea, we call it a bar-built estuary. Fjord estuaries are a form of estuaries glaciers create. They occur when glaciers carve out a deep, steep valley and then retreat while the ocean rushes in to fill the narrow, deep depression.

Difference Between Delta and Estuary

A delta is a landform created due to the deposition of sediments carried by water in the river, while an estuary is a partially enclosed coastal water body where freshwater from streams or rivers mixes with the saltwater from the ocean.