Generally, Virtualization is the process of creating a virtual version of a server, desktop, operating system, storage device or a network resource. Docker uses container virtualization, whereas VM uses server virtualization. Docker is a software that provides a platform to execute applications. Moreover, it compacts different software components such as applications, tools, libraries and configuration files into a complete standardized unit. On the other hand, VM is an operating system (OS) or application environment that is installed on software, which imitates dedicated hardware. Furthermore, it provides hardware-level virtualization. 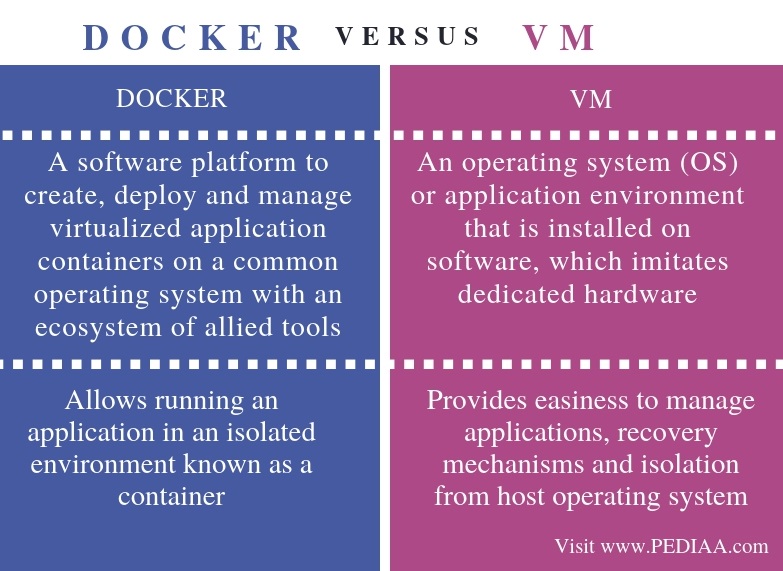 Docker is a software platform to manage and run containers. Here, a container is an abstraction at the app layer. It combines code and dependencies together. A container also supports virtualization of the operating system. Furthermore, it is possible to run multiple containers on the same machine with sharing resources among them. However, each container executes its own processes. Docker allows the developers to develop applications and ship them into containers for deployment. Therefore, the developer can perform tasks such as development and quality assurance much easier. Moreover, Docker container can be deployed in a physical device, virtual machine, or cloud. Furthermore, it also improves security.

VM (Virtual Machine) is an emulation of a computer system. It provides functionalities similar to a physical computer. In other words, it operates similar to a separate computer while running the applications as a separate computer. Also, it consists of specialized hardware and software. Moreover, a virtual machine monitor helps in creating and running virtual machines.

Besides, there can be multiple virtual machines inside a single host at a time. Here, the host refers to a virtual machine created with another computing environment. Moreover, there are two types of virtual machines.

Process virtual machine  – This provides a platform-independent programming environment. Furthermore, it allows executing programs in a similar way on any given platform.

In overall, a virtual machine is easier to manage. Also, it provides disaster recovery mechanisms. On the other hand, in a virtual machine, the hardware resources are distributed in an indirect way. Therefore, it can affect the efficiency of a virtual machine. Moreover, when multiple VMs are running on a single machine, it can reduce performance.

Difference Between Docker and VM

Docker is a software platform to create, deploy, and manage virtualized application containers on a common operating system with an ecosystem of allied tools, while a virtual machine (VM) is an operating system (OS) or application environment that is installed on software, which imitates dedicated hardware. Thus, this is the fundamental difference between Docker and VM.

While Docker allows running an application in an isolated environment known as a container, VM provides easiness to manage applications, recovery mechanisms, and isolation from the host operating system.

In brief, a docker is a platform to build, run and manage software containers, whereas VM is an abstraction of physical hardware, turning one server into many servers. The main difference between Docker and VM is that a docker provides container virtualization, while VM provides hardware-level virtualization.