Gills and lungs are the two types of respiratory systems in vertebrates. Generally, they are responsible for the exchange of respiratory gases: oxygen in and carbon dioxide out. Moreover, blood vessels run near them to facilitate gas exchange. 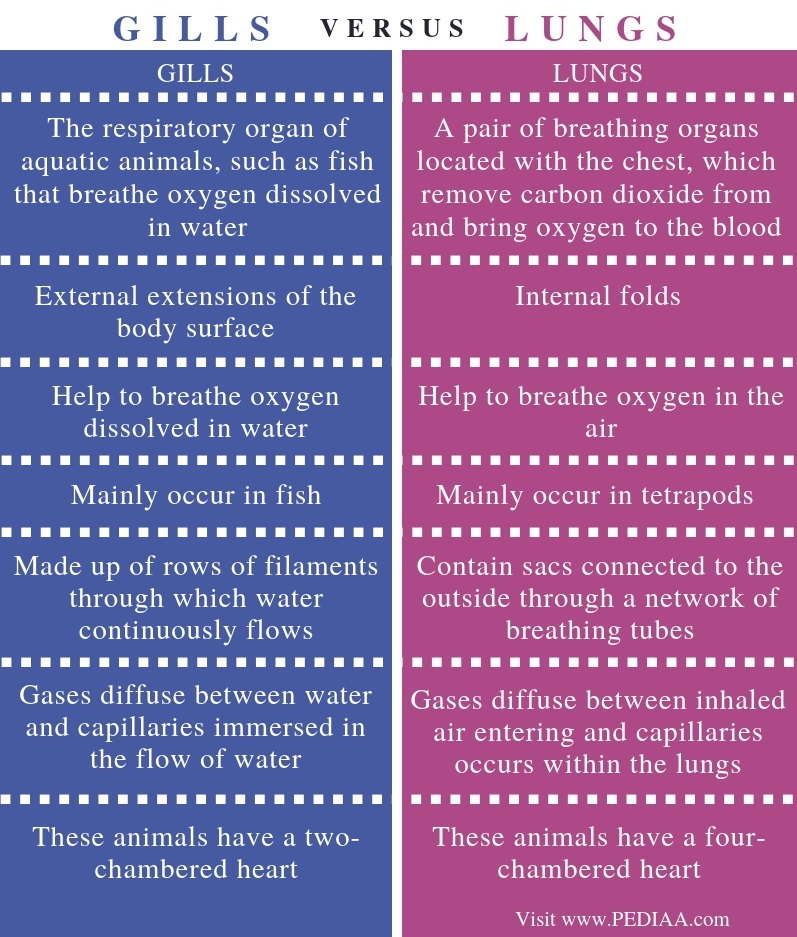 Gills are the main type of respiratory organs in animals that live in water. Generally, they mainly occur in fish but, amphibians, arthropods and annelids also have gills. Gills are a type of convoluted growths surrounded by blood vessels. Additionally, a thin epithelial layer covers them. However, the gills in fish and crabs are internal while gills in amphibians are external. Typically, gills are arranged in a series of plates right behind the head. Moreover, there are a series of openings from the esophagus to the exterior. In addition, a cartilaginous or bony gill arch supports each gill.

Furthermore, the series of comb-like filaments in gills are known as gill lamellae, which increases the surface area of gills. Generally, during breathing, fish intake a mouthful of water and draw through the sides of the throat, forcing water through the openings of the gills. Moreover, bony fish have three pairs of gill arches while cartilaginous fish have five to seven pairs. However, water contains less oxygen concentration when compared to air. Therefore, breathing inside water is less efficient.

Lungs are the most advanced form of the respiratory system found in animals including humans, mammals and most of the other vertebrates. Moreover, a few fish and some snails also have lungs. Generally, in vertebrates, there is a pair of lungs in the thorax on either side of the heart. The main function of the lungs is to extract oxygen from the atmosphere while transferring it into the bloodstream. 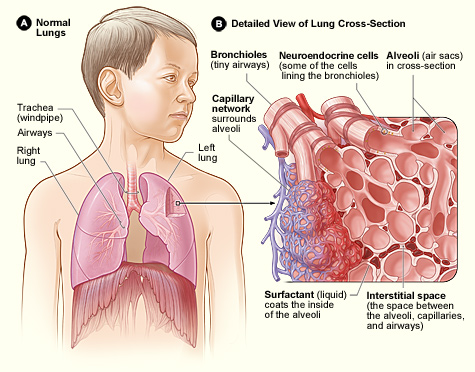 Moreover, the lungs are ingrowths consisting of a series of tubes, which carry air towards a large number of small sacs. Both these tubes and sacs are covered by the pleura. Generally, lungs begin at trachea at the lower respiratory system. Then, these trachea further branch into bronchi and bronchioles. After that, bronchioles branch into alveolar ducts, which form alveolar sacs, containing alveoli. In the meanwhile, small capillaries surround alveoli through which the gas exchange occurs.

Similarities Between Gills and Lungs

Difference Between Gills and Lungs

Gills refer to the respiratory organ of aquatic animals, such as fish that breathe oxygen dissolved in water while lungs refer to a pair of breathing organs located with the chest, which remove carbon dioxide from and bring oxygen to the blood.

While gills are external extensions of the body surface, lungs are internal folds.

Further, their structure is also a major difference between gills and lungs. Gills are made up of rows of filaments through which water continuously flows while lungs contain sacs connected to the outside through a network of breathing tubes.

Gills are the type of respiratory system found in animals in water such as in fish. They contain rows of filaments through which water continuously flows. On the other hand, lungs are the type of respiratory system present in animals that live on the land. Therefore, they help to take oxygen in the air. Moreover, lungs contain tubes, which carry air to the sacs where the gas exchange occurs. Thus, the main difference between gills and lungs is the structure and the type of gas exchange.