Home » Geography » What is the Difference Between Glaciers and Icebergs

The main difference between glaciers and icebergs is that glaciers are large ice sheets that extend over a vast area whereas icebergs are small chunks of ice broken from these glaciers and float freely in the ocean. 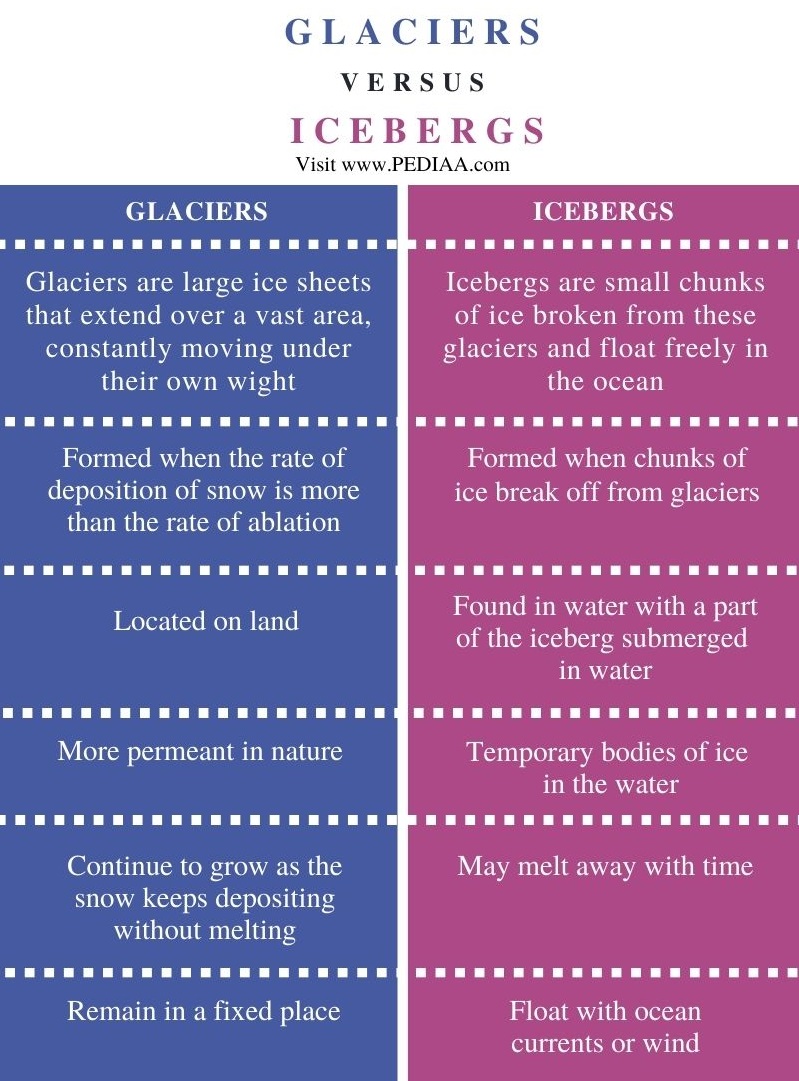 Glaciers are large masses of ice that moves slowly over land. They form in places where snow keep piling up each year (piling more than melting). Then this snow starts to become denser and tightly packed, gradually changing from light and fluffy crystals to hard ice pellets. When new snow falls, it buries these ice pellets, making them more compressed. Then it becomes dense, grainy ice known as firn. Over the years, layers of firn build on top of each other, and firn grains fuse into a large mass of solid ice. Then the glacier starts to move under its own weight. Glaciers are very heavy and exert a huge pressure that the firn melts without any increase in temperature. This meltwater makes the bottom of the heavy glacier slick and more able to spread across the landscape. 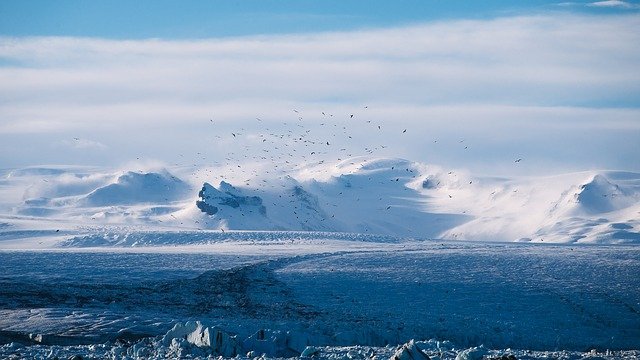 About one-tenth of the Earth is covered by glacial ice. We can categorize glaciers into two broad categories as alpine glaciers and ice sheets. Alpine glaciers are found on mountainsides; in fact, they are found in high mountain ranges of every continent except Australia. We also call these mountain glaciers or valley glaciers. However, the vast majority of glaciers are found as ice sheets. They create broad domes and spread out from their centres in all directions. As they spread, they cover everything around them with a thick blanket of ice, even entire mountains. Continental glaciers are continuous masses of ice that spread over vast areas. They cover most of Antarctica and the island of Greenland.

Icebergs are ice that broke off from glaciers and are floating in open water. They travel with ocean currents, sometimes crashing up against the shore or getting caught in shallow waters. They come in different sizes and shapes, from small chunks of ice cubes to ice islands that are the size of a small country. Icebergs can also be classified according to their shape, the most common shapes being tabular and non-tabular. Tabular Icebergs have a flat top and steep sides, while non-tabular Icebergs have different shapes. 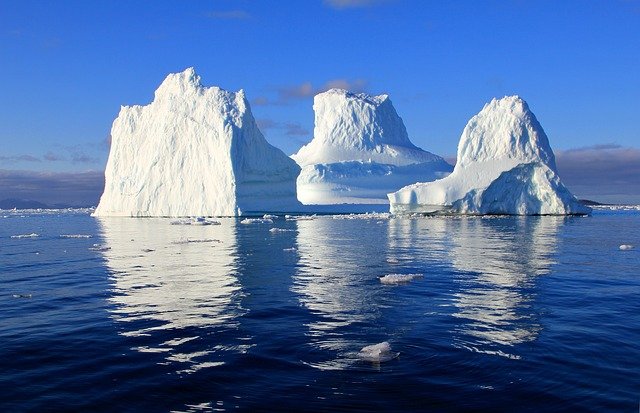 According to the NOAA (National Oceanic and Atmospheric Administration), in order to be classified as an iceberg, “the height must exceed 16 feet above sea level, have a thickness between 98 and 164 feet, and cover an area greater than 5,382 square feet.” We also use different names to refer to icebergs of different sizes. Small Icebergs are called growlers. Bergy bits are medium to large fragments of ice. Most of the icebergs on Earth are in the North Atlantic and the waters surrounding Antarctica.

Difference Between Glaciers and Icebergs

Glaciers are large ice sheets that extend over a vast area, constantly moving under their own wight, whereas icebergs are small chunks of ice broken from these glaciers and float freely in the ocean.

Glaciers are more permeant in nature whereas icebergs are temporary bodies of ice in the water.

Furthermore, glaciers continue to grow as the snow keeps depositing without melting, but icebergs may melt away with time.

Glaciers remain in a fixed place, whereas icebergs float with ocean currents or wind.

The main difference between glaciers and icebergs is that glaciers are large ice sheets that extend over a vast area whereas icebergs are small chunks of ice broken from these glaciers and float freely in the ocean.