Glutathione and glutamine are substances that are naturally produced in the body. Both substances can also be administrated as supplements from the outside. 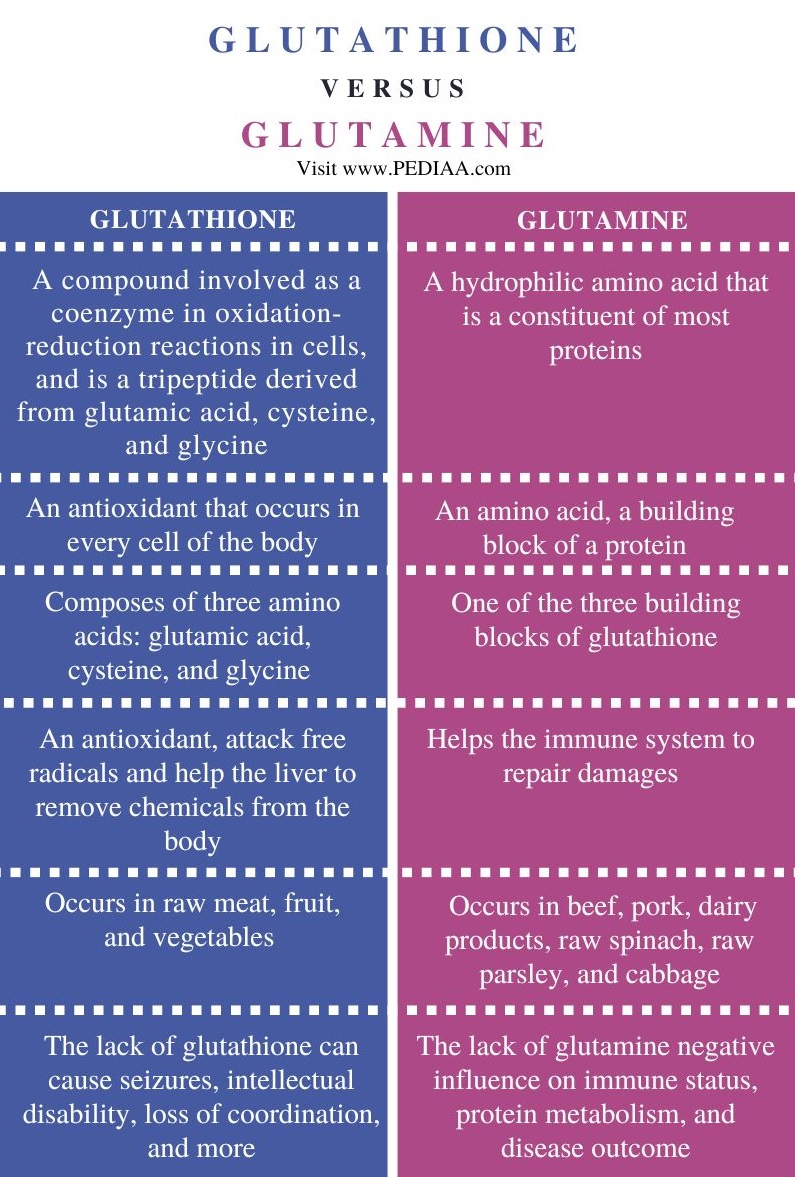 Glutathione is an antioxidant and the three amino acid components that make up glutathione are glutamic acid, cysteine, and glycine. The liver synthesizes glutathione, and glutathione takes part in many processes in the body. The functions of glutathione in the body include tissue building and repair, making chemicals and proteins needed in the body, and in immune system function. Although people take glutathione for aging, alcohol use disorder, liver disease, heart disease, and many other conditions, there is no good scientific evidence to support these uses.

Doctors inject glutathione for nerve damage. However, the body produces glutathione naturally through biochemical pathways, and it is a powerful antioxidant that reduces oxidative stress and prevents cell damage.

Glutamine is the most abundant amino acid in the body. The body’s muscles produce glutamine and it circulates through the body by blood to different organs. Generally, glutamine is an amino acid and it is a common building block in proteins. Other than that, glutamine supplements are important in gut function, immune function, etc. It is also important in treating sickle cell disease and burns, improving recovery after surgery, injuries, and for complications of HIV/AIDS. Besides, it is also used for diarrhea, cystic fibrosis, obesity, lung cancer, and many other conditions.

Glutamine is a nonessential amino acid since the body can produce glutamine naturally by biochemical pathways.

Similarities Between Glutathione and Glutamine

Difference Between Glutathione and Glutamine

Glutathione refers to a compound involved as a coenzyme in oxidation-reduction reactions in cells and is a tripeptide derived from glutamic acid, cysteine, and glycine, while glutamine refers to a hydrophilic amino acid that is a constituent of most proteins.

Usually, glutathione is an antioxidant that occurs in every cell of the body while glutamine is an amino acid, a building block of a protein.

Glutathione is composed of three amino acids: glutamic acid, cysteine, and glycine while glutamine is one of the three building blocks of glutathione.

Glutathione as an antioxidant, attack free radicals and help the liver to remove chemicals from the body, while glutamine helps the immune system to repair damages.

The lack of glutathione can cause seizures, intellectual disability, loss of coordination, and more, while the lack of glutamine negative influence on immune status, protein metabolism, and disease outcome.