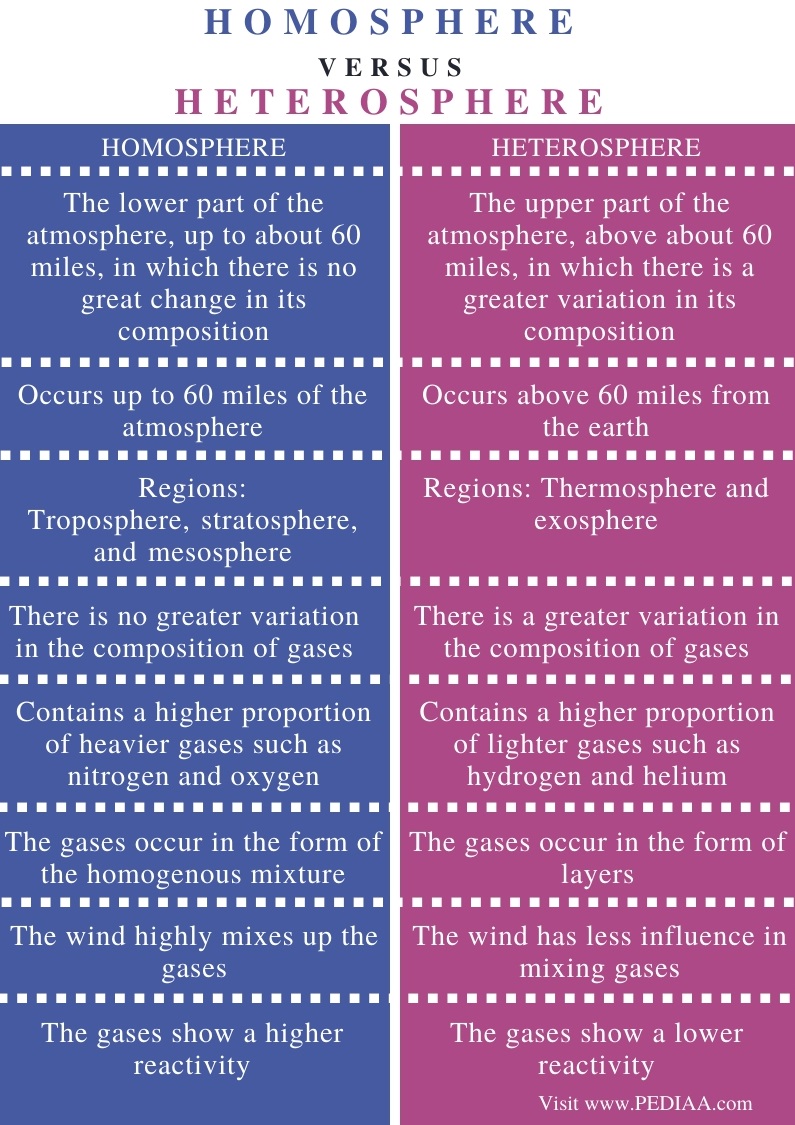 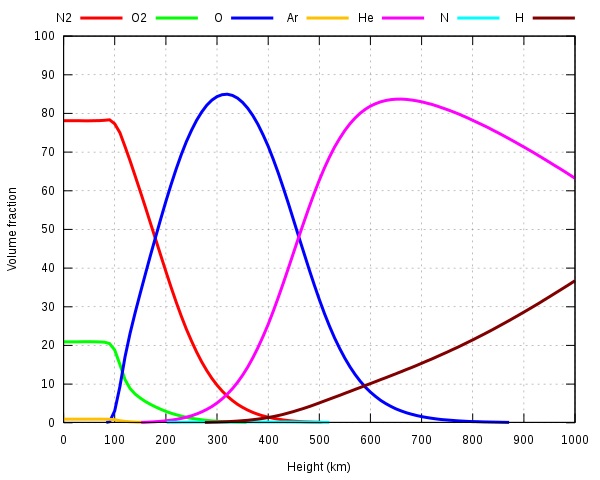 Moreover, the homosphere contains more than 99% of the mass of the Earth’s atmosphere. Also, its composition is usually 78% nitrogen, 21% oxygen, and trace amounts of other molecules, such as argon and carbon dioxide. Although the composition remains the same, the concentration of air decreases with the altitude. Furthermore, the three layers of the homosphere are the troposphere, stratosphere,  and mesosphere. 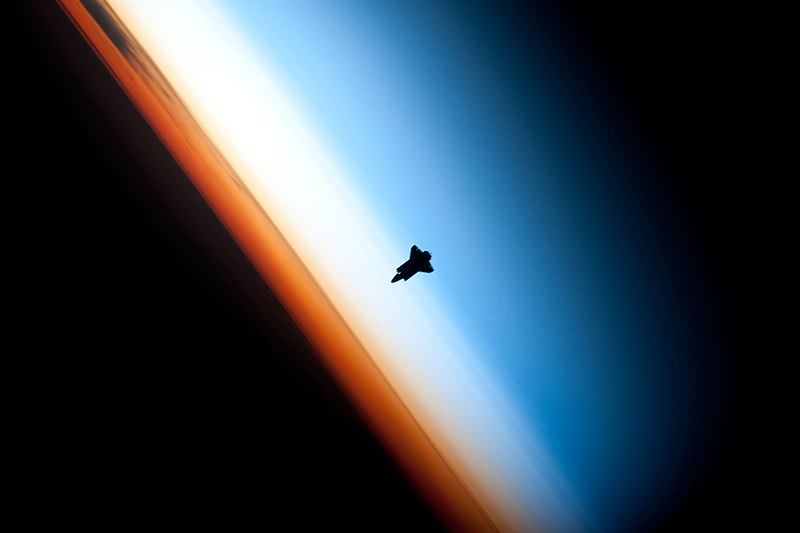 The stratosphere is the middle layer of the homosphere, lying between the altitude of roughly 15 km and 50 km. In this layer, the temperature increases with altitude. Also, the ozone layer lies in the stratosphere (above about 18-20 km). And notably, the concentration of O3 is much higher than in the rest of the atmosphere. Consequently, this blocks most ultraviolet light from penetrating the lower layers of the atmosphere. Supersonic jets fly in this layer of the homosphere.

The mesosphere is the top-most layer of the homosphere, extending roughly from 50 km up to 80 km. In contrast to the stratosphere, the temperature decreases with the increasing altitude in the mesosphere. This is due to the decreasing absorption of solar radiation by the rarefied atmosphere and increasing cooling by CO2 radiative emission.  Typically, the mesosphere ends at the mesopause, the coldest part of Earth’s atmosphere with temperatures below −143 °C (−225 °F; 130 K). Meteors, which are small bodies of matter from the outer space, entering the Earth’s atmosphere, exist in this layer.

Heterosphere is the uppermost layer of the Earth’s atmosphere; it begins at about 100 km altitude and extends to the outer reaches of its atmosphere. In heterosphere, the gases separate out into layers by molecular diffusion with the increasing altitude. Also, heavier molecules tend to stay in the lower layers of the heterosphere while the lighter molecules stay in the upper layers. Normally, nitrogen, oxygen, helium, and hydrogen are the major constituents of the heterosphere. However, day and night cycles, solar activity, geomagnetic activity, and seasonal cycles are the other factors affecting the density distribution in the heterosphere in addition to the diffusion.

Moreover, the heterosphere has two layers: thermosphere and exosphere.

The thermosphere is the lower layer of the heterosphere, lying from  80km to 460km. It is directly above the mesosphere and below the exosphere, extending from about 90 km to between 500 and 1,000 km. At this layer, temperatures increase with altitude as a result of the absorption of highly energetic solar radiation. 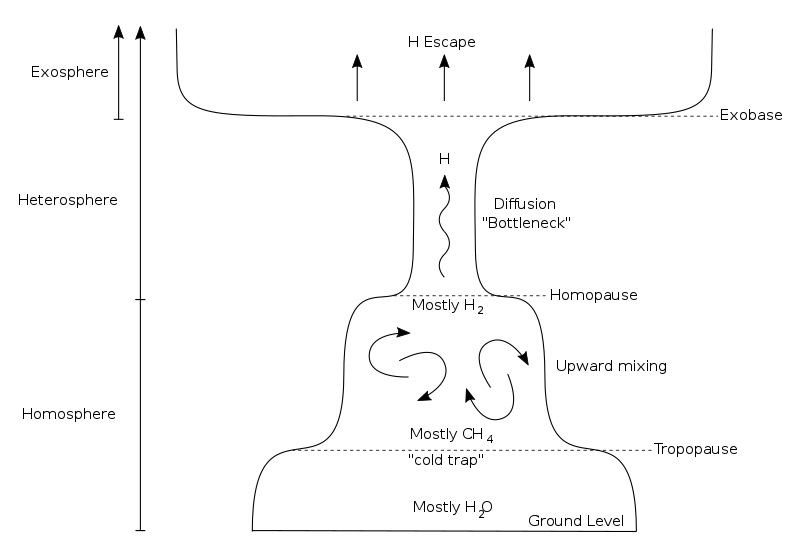 Exosphere is the top layer of the heterosphere where the atmosphere turns into space. Therefore, it is a thin, atmosphere-like volume, surrounding the Earth or the natural satellite. Particularly, the density of this layer is too low for molecules to behave as gases by colliding with each other. However, they exist binding to the core by gravity. Also, carbon dioxide and hydrogen are gases that mostly occur in the exosphere. The lower boundary of the exosphere is called the exobase, ranging from 500 to 1,000 km.  Meanwhile, the upper boundary of the exosphere extends up to a distance at which the influence of solar radiation pressure on atomic hydrogen exceeds that of Earth’s gravitational pull. Generally, it happens at half the distance to the Moon.

Degree of Composition of Gases

Mixing by the Wind

The wind highly mixes the gases up in the homosphere, while wind has less influence in mixing gases in the heterosphere.

The homosphere is one of the two layers of the atmosphere, occurring up to 60 miles from the Earth’s surface. Also, it contains a homogenous mixture of gases due to the continuous mixing by the wind. It contains mainly heavy gases such as oxygen and nitrogen. Due to high mixing, it shows a higher reactivity between gases. In contrast, the heterosphere is the second layer of the atmosphere, occurring above the homosphere. It mainly contains lighter gases in the form of layers. Therefore, it shows a lower reactivity between its gases. Hence, the main difference between the homosphere and heterosphere is their altitude and composition of gases.