PCR (polymerase chain reaction) is a widely used molecular biological technique to produce thousands to millions of copies of a particular DNA fragment through the exponential amplification. It was developed by Kary Mullis in 1983. The most significant feature of PCR is that it relies on thermal cycling. Therefore, it permits different temperature-dependent reactions to occur, including DNA melting and enzyme-driven DNA polymerization. On the other hand, the two main reagents used in PCR are the DNA primers, which are complementary to the target sequence and a heat-stable DNA polymerase such as Taq polymerase, isolated from the thermophilic bacterium Thermus aquaticus. Meanwhile, the forward and reverse PCR primers flank the region to be polymerized on the DNA fragment. 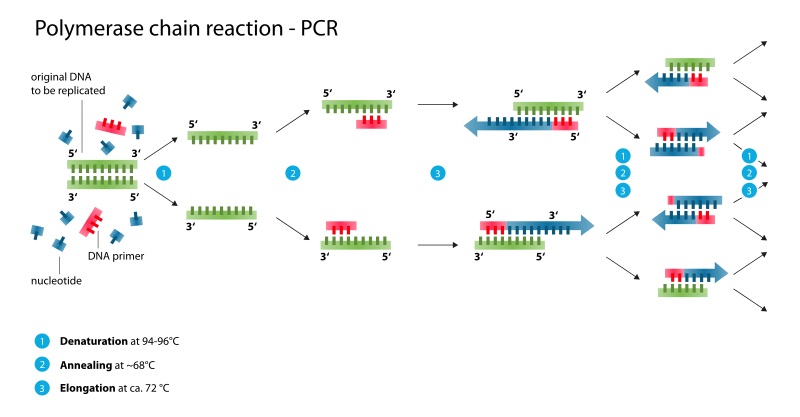 Furthermore, the three main steps involved in a PCR are:

Generally, the three steps are repeated for 30-40 times during the PCR to obtain an exponential growth of the DNA fragment of interest.

What is DNA Replication

DNA replication is the biological process responsible for the synthesis of two identical copies of DNA from one copy. Moreover, it is the basis of biological inheritance and aids cells to undergo cell division. Additionally, one of the main features of DNA replication is semiconservative replication. Each DNA strand in the DNA duplex serves as a template for the synthesis of a new DNA strand, which is complementary to it. Furthermore, a set of proteins take part in DNA replication. Basically, they are DNA helicase to unwind DNA duplex, DNA polymerase to polymerize DNA, DNA clamp to prevent the DNA polymerase dissociation, single-strand binding proteins to stabilize single-stranded DNA, topoisomerase to relax DNA strands during polymerization, DNA ligase to ligate Okazaki fragments, primase to synthesize RNA primers, and telomerase to lengthen telomeric DNA.

Similarities Between PCR and DNA Replication

Difference Between PCR and DNA Replication

PCR (polymerase chain reaction) refers to a method widely used in molecular biology to make many copies of a specific DNA segment while DNA replication refers to the biological process of producing two identical replicas of DNA from one original DNA molecule. Thus, this is the main difference between PCR and DNA replication.

The main goal of PCR is to produce 230 to 240 copies of a single DNA fragment while the main goal of DNA replication is to copy the whole genome at once.

Continuity of the Process

Opening up the Two Strands of DNA Helix

PCR serves as a simple approach for in vitro DNA synthesis while DNA replication is a complex process, which depends upon a well defined but complex set of enzymes and co-factors.

The speed of PCR is 1-4 kb/min while the speed of DNA replication is 1 kb/s.

Basically, PCR is the process of in vitro DNA synthesis. Also, it is a simple approach which uses high temperatures and thermophilic Taq polymerase as the enzyme. Additionally, it uses DNA primers. However, the main goal of PCR is to produce a large number of copies of a particular DNA fragment. On the other hand, DNA replication is the in vivo process of DNA synthesis responsible for the synthesis of the whole genome, preparing the cell to divide. However, it requires a number of physiological agents along with the enzyme DNA polymerase. Moreover, this enzyme operates at body temperature. Additionally, DNA replication is a highly accurate process. Therefore, the main difference between PCR and DNA replication is the different features of the process.