In brief, prosimians and anthropoids are two groups of primates descended from tree-dwellers. Generally, they show adaptations to brachiation such as the rotating shoulder joint, a big toe and thumb that are widely separated from other toes or fingers, and stereoscopic vision.

Prosimians are the primitive primates whose members belong to both Strepsirrhini and Haplorhini suborders of the order Primates. They include four infraorders, two from each suborder. The two infraorders from the suborder Strepsirrhini include Lemuriformes (lemurs, lorises, and bushbabies) and Adapiformes  (extinct “lemur-like” primates). And, the two infraorders from the suborder Haplorhini include Tarsiiformes  (tarsiers) and Omomyiformes  (extinct “tarsier-like” primates). 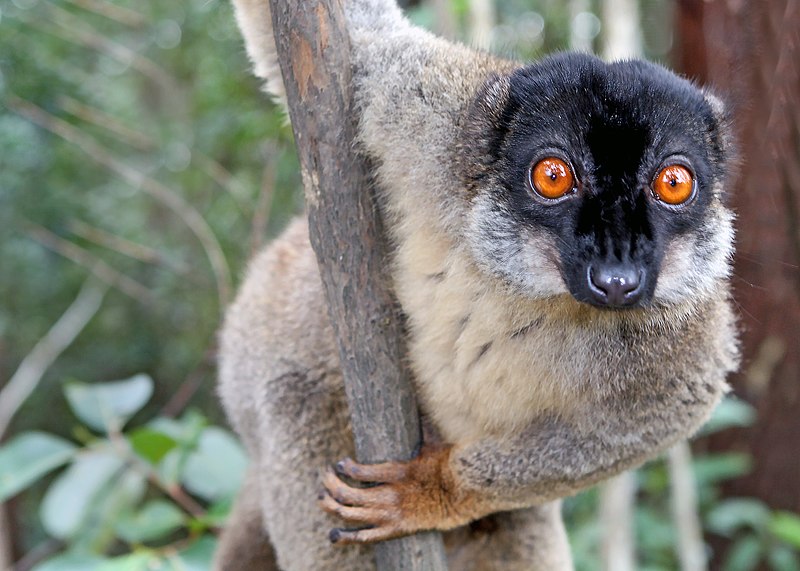 Of these, if you take strepsirrhines, they have small brains in comparison to their body size. However, their brains also have large olfactory lobes, which give an increased sense of smell. In addition to these features, they also can sense pheromones through their vomeronasal organ. Also, they have increased night vision due to the presence of a reflective layer. In the case of lemuriforms, they have a toothcomb, a specialized set of teeth in the front, lower parts of the mouth are mostly used for combing fur. On the other hand, one of the key features of prosimians is the presence of two laterally flattened toilet claws used for grooming. Besides, lemurs and lorises use the second toe for the purpose while tarsiers use second and third toes.

Anthropoids are the higher primates, excluding prosimians. Generally, they are also known as simians. However, they belong to the infraorder Simiiformes or flat-nosed primates under the suborder Strepsirrhini of the order Primates. Meanwhile, the two parvorders of anthropoids are Patyrrhini and Catarrhini. Of these two, the parvorder Patyrrhini includes New World monkeys while the parvorder Catarrhini includes the two superfamilies: Cercopithecoidea (Old World monkeys) and Hominoidea (apes), including the genus Homo.  New World monkeys originated 40 million years ago in South America, while the remaining simians split into Old World monkeys and apes around 25 million years ago.

Figure 2: A Catarrhine (Chimpanzee) and A Platyrrhine (Red-Faced Spider Monkey)

Moreover, platyrrhines include flat-nosed primates while catarrhines include hooked-nose primates. Also, the nostrils of platyrrhines are farther apart and they point outward while the nostrils of catarrhines are closer together and they point down. In addition to these featural differences, platyrrhines have a large body size in comparison to catarrhines. Besides, the New World monkeys of the family Atelidae are the only primates having a prehensile tail. In comparison to this, Old World monkeys have shorter, non-grasping tails while apes lack tails.

Similarities Between Prosimians and Anthropoids

Difference Between Prosimians and Anthropoids

Moreover, Prosimians belong to both Strepsirrhini and Haplorhini suborders while anthropoids belong to the suborder Haplorhini.

Prosimians include the bushbabies of Africa, the lemurs of Madagascar, and the lorises, pottos, and tarsiers of Southeast Asia while anthropoids include New World monkeys, Old World monkeys, apes, and humans.

Prosimians are relatively lower primates while anthropoids are higher primates.

Furthermore, prosimians are mainly arboreal while anthropoids can be either arboreal or terrestrial.

In addition, prosimians have relatively small brain sizes while anthropoids have large brains.

Moreover, prosimians have lower incisors forming a toothcomb while anthropoids do not have a toothcomb.

Prosimians are nocturnal while anthropoids are diurnal.

Prosimians are the relatively primitive group of primates characterized by the presence of a long face, moist snout, and large, slightly sideways-facing eyes. They use toothcomb and rely on smell rather than vision as in higher primates. In addition, they have relatively small brains. Prosimians such as bushbabies, lemurs, lorises, pottos, and tarsiers are nocturnal. In comparison, anthropoids are the higher primates characterized by the presence of a flat face, dry nose, and forward-facing eyes. They have large brains and are active during the day time. Also, they tend to be more terrestrial than arboreal. Typically, anthropoids include New World monkeys, Old World monkeys, apes, and humans. Therefore, the main difference between prosimians and anthropoids is their characteristics and behavior.