The main difference between SNP and mutation is that SNP is a type of mutation that occurs in a single nucleotide in the genome whereas a mutation can be many types of changes in the structure or the quantity of DNA. Furthermore, SNPs bring variations to the genomes within a population while a mutation always refers to a novel change in the genome. 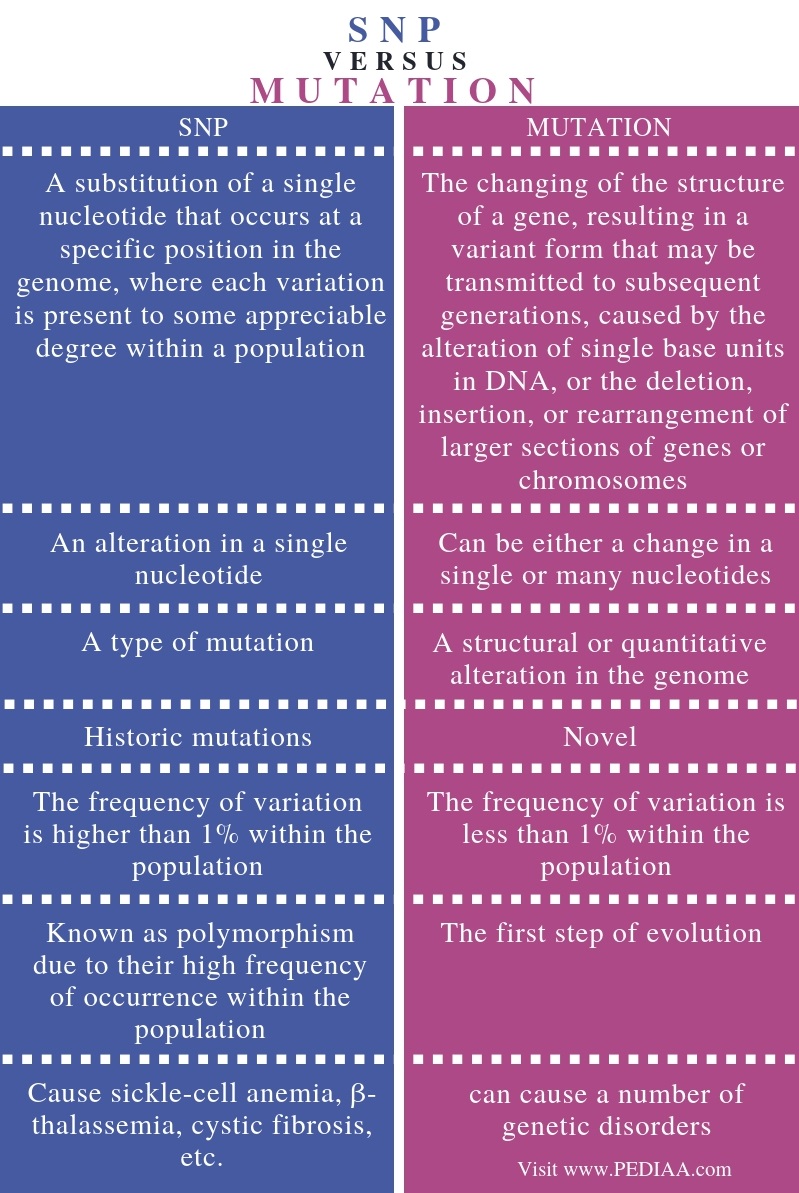 What is an SNP

SNP (single nucleotide polymorphism) is a type of DNA variant defined by the detectable with a more than 1% frequency within a population. Therefore, it is the most common genetic variation among people. Significantly, an SNP is an alteration of a single nucleotide in the genome. Human genome roughly contains 4 to 5 million SNPs and an SNP occurs once in every 1000 base pairs in the human genome. However, the same SNP variation occurs in many people and around 100 million types of SNPs have been identified so far in the human genome. 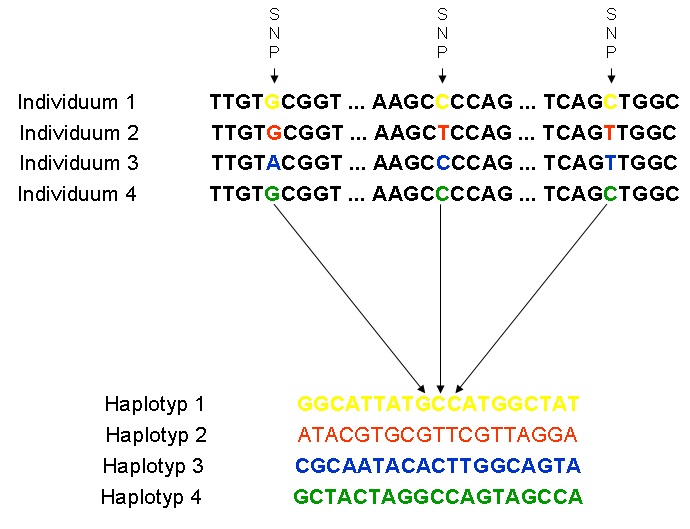 Furthermore, SNPs in the non-coding region may affect the mRNA structure. Also, they can increase disease susceptibility including cancer. However, they can be used as biological markers which help to locate genes associated with diseases. Additionally, they are important for the development of STR-based DNA fingerprinting techniques. On the other hand, the SNPs in the coding region can be either synonymous substitutions, which does not change the amino acids sequence, or nonsynonymous substitutions, which can be either missense or nonsense.

Moreover, mutations range from size. They can be alterations of single to several nucleotides in the genome. Point mutations are the alterations of single nucleotides in the genome. Although they resemble SNPs, their occurrence is rare (less than 1%) within a population. Also, insertions, deletions, and substitution mutations can alter several nucleotides of the genome. However, more large-scale mutation alters the structure of the chromosomes. Chromosomal rearrangements such as translocations, inversions, chromosomal crossover, etc. change the structure of chromosomes.

Similarities Between SNP and Mutation

Difference Between SNP and Mutation

SNP or single nucleotide polymorphism refers to a substitution of a single nucleotide that occurs at a specific position in the genome, where each variation is present to some appreciable degree within a population while a mutation refers to the changing of the structure of a gene, resulting in a variant form that may be transmitted to subsequent generations, caused by the alteration of single base units in DNA, or the deletion, insertion, or rearrangement of larger sections of genes or chromosomes. Thus, this explains the main difference between SNP and mutation.

Moreover, SNP is a type of mutation while a mutation is a structural or quantitative alteration in the genome.

Another difference between SNP and mutation is that SNPs are historic mutations while mutations are novel.

Frequency within a Population

SNPs are known as polymorphism due to their high frequency of occurrence within the population while a mutation is the first step of evolution. Hence, this is also a difference between SNP and mutation.

SNP or single nucleotide polymorphism is a type of change in the single nucleotide in the genome. Significantly, the frequency of occurrence of a particular type of SNP within a population is high (more than 1%). SNPs have a wide variety of applications in genetics. On the other hand, a mutation is a small to large scale change in the structure or the quantity of genome. It occurs rarely and some mutations are beneficial and lead to evolution. But, some mutations are harmful and can cause diseases. Therefore, the main difference between SNP and mutation is their frequency and influence.