Home » Public » People » What is the Difference Between Society and Community

The main difference between society and community is that the society is built upon interactions with varied people whereas the community is the collection of people with similar interests, essentially residing in one geographic place.

The individual is the basic component of both community and society. Society is a collection of different communities. Thus, different communities make the fundamental building block of society. Likewise, society makes the building block of a country. Hence, both community and society are necessary elements in sociology and humanities. They demonstrate human characteristics, interactions and connections with one another. 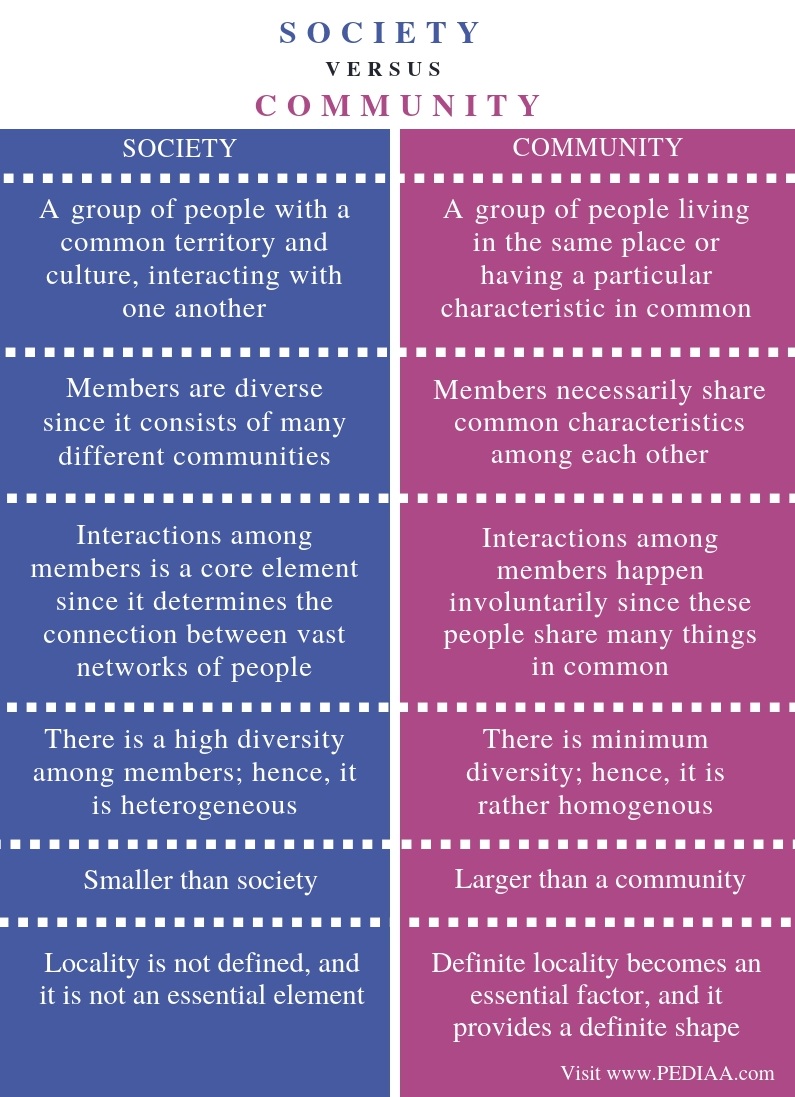 What is a Society

Sociology defines society as “a group of people with a common territory, interaction, and culture”. These groups consist of two or more varied people who interact and identify themselves with one another. In brief, these groups can be known as communities as well.

The etymology of the word society can be traced back to Latin. The Latin word sociatas, which in turn was derived from the noun socius. Socius means, comrade, friend, or ally; this describes a bond or interaction between parties that are friendly, or at least civil. 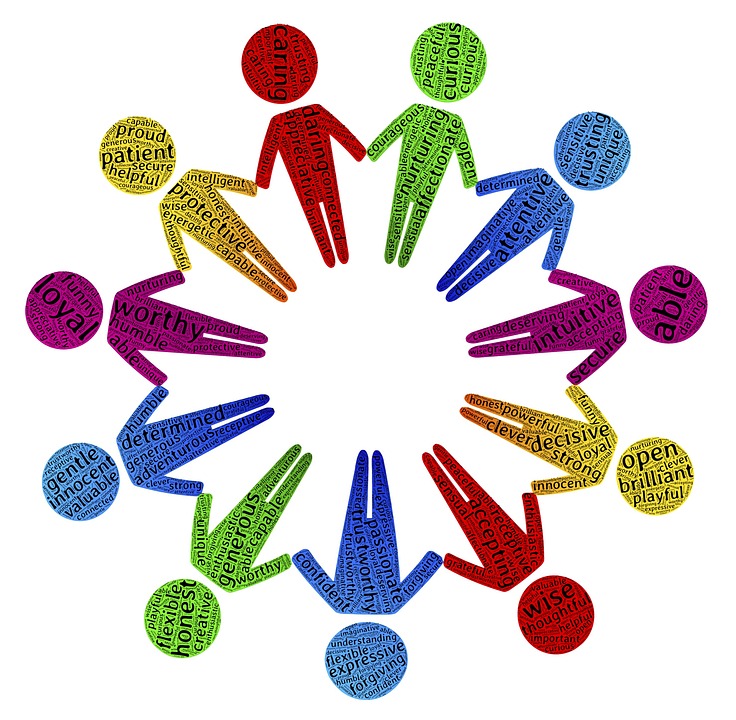 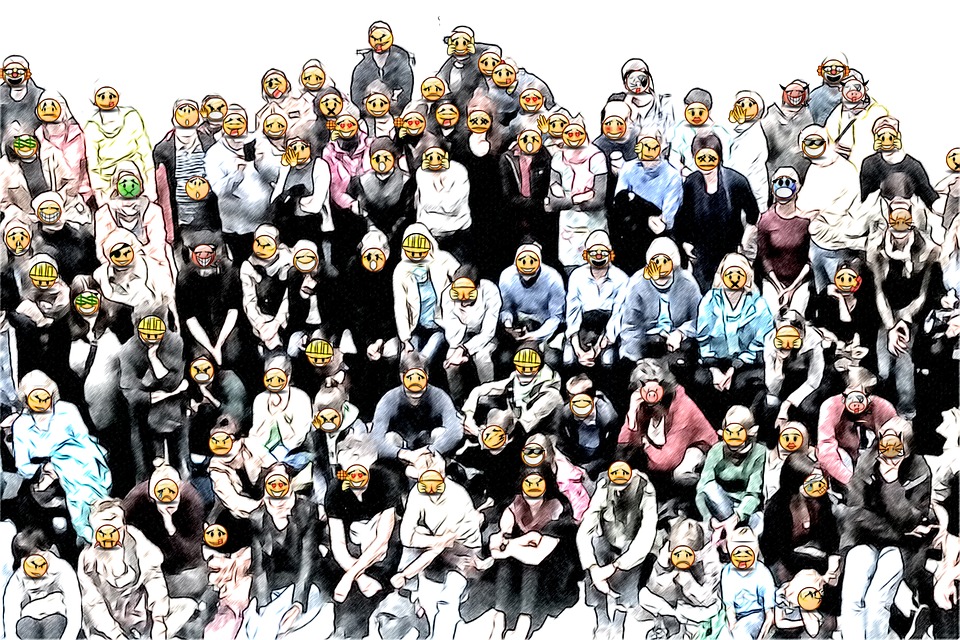 Thus, there are also similarities among these varied communities or groups in society as they share aspects of their common culture, such as language or beliefs. Hence, cultures become a defining element of society. Thus, social sciences highlight the fact that a larger society often exhibits a dominance or stratification patterns among its groups.

As a result, society has a much wider scope in comparison to community. A society has heterogeneity, and it easily embraces people having different conflicts and differences. Hence, likenesses, as well as conflicts, exist simultaneously within a society. However, since society is vast, there is every possibility of adjustment and cooperation between people. Furthermore, defined geographic locality is not an essential element for society, unlike for a community.

What is a Community

The etymology of the word community can be traced back to the Latin word communitas, which means shared in common and public spirit. Hence, community is a group of people living in the same place or having a particular characteristic or a likeness in common.

Thus, there is no distinct diversity among them; they share common characteristics such as religion, language, caste, age, sex, family and kinship, profession, and, residence. Therefore, homogeneity acts as a core element in a community.

Hence, a social group known as a community is created based on these common characteristics among these members or people with similar interests. As a result, there can be communities based on this likeness they share in common with one another. 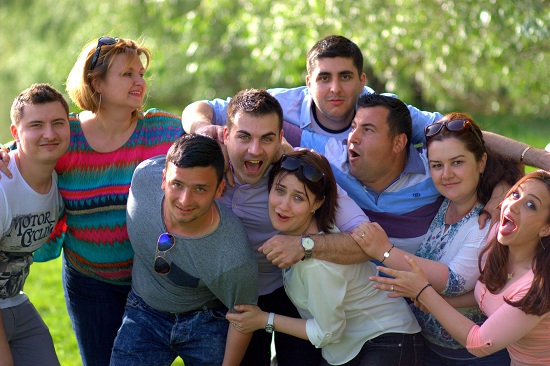 Moreover, one distinct characteristic of a community is that the members should essentially reside in the same geographic place to define themselves as a community in addition to the other similar interests they share. Therefore, there are different communities within one social unit as well. 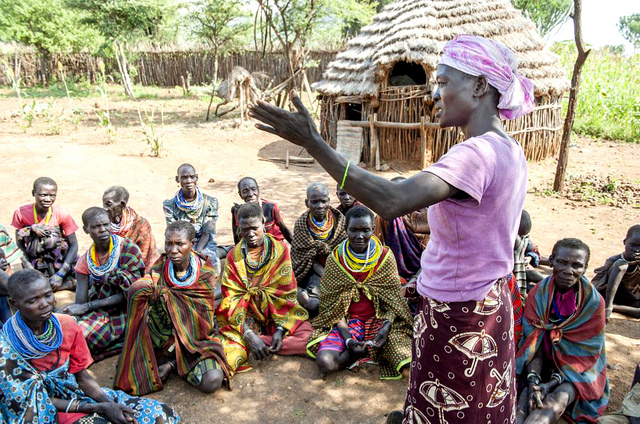 Communities Based on Common Interests

Hence, community members tend to define these common characteristics they share among each other as rendering a certain identity to them. Thus, maintaining them is important as it also maintains their identity. For example, consider the marriage distinctions among some communities: those of a high caste community do not prefer their member to have a marriage liaison with someone of a low caste as it destroys their identity. Therefore, every effort in a community is to avoid differences or conflicts among its members. Thus, differences and conflicts cannot exist in a community.

Relationship Between Society and Community

Difference Between Society and Community

The members of a society are diverse since it consists of many different communities while the members in a community necessarily share common characteristics among each other.

Size is a major difference between society and community. Comparatively, a community is smaller than society, and society is larger than a community.

In a society, locality is not defined, and it is not an essential element to shape a society. For a community, definite locality becomes an essential factor, and it provides a definite shape to the community.