The main difference between spelt and wheat is that spelt or Triticum spelta is a species of the wheat family and an ancient cereal grain that is an alternative to wheat, whereas wheat is a grass widely cultivated for seeds, and is a cereal grain used as staple food worldwide. Furthermore, spelt is a more nutritious flour as the bran, germ, and endosperm contribute to the production of flour while wheat has a reduced nutrient quality as the germ and the bran are removed, and only the endosperm is used to produce flour.

Spelt and wheat are two types of cereal grains in the same family. Both are used to produce flour. 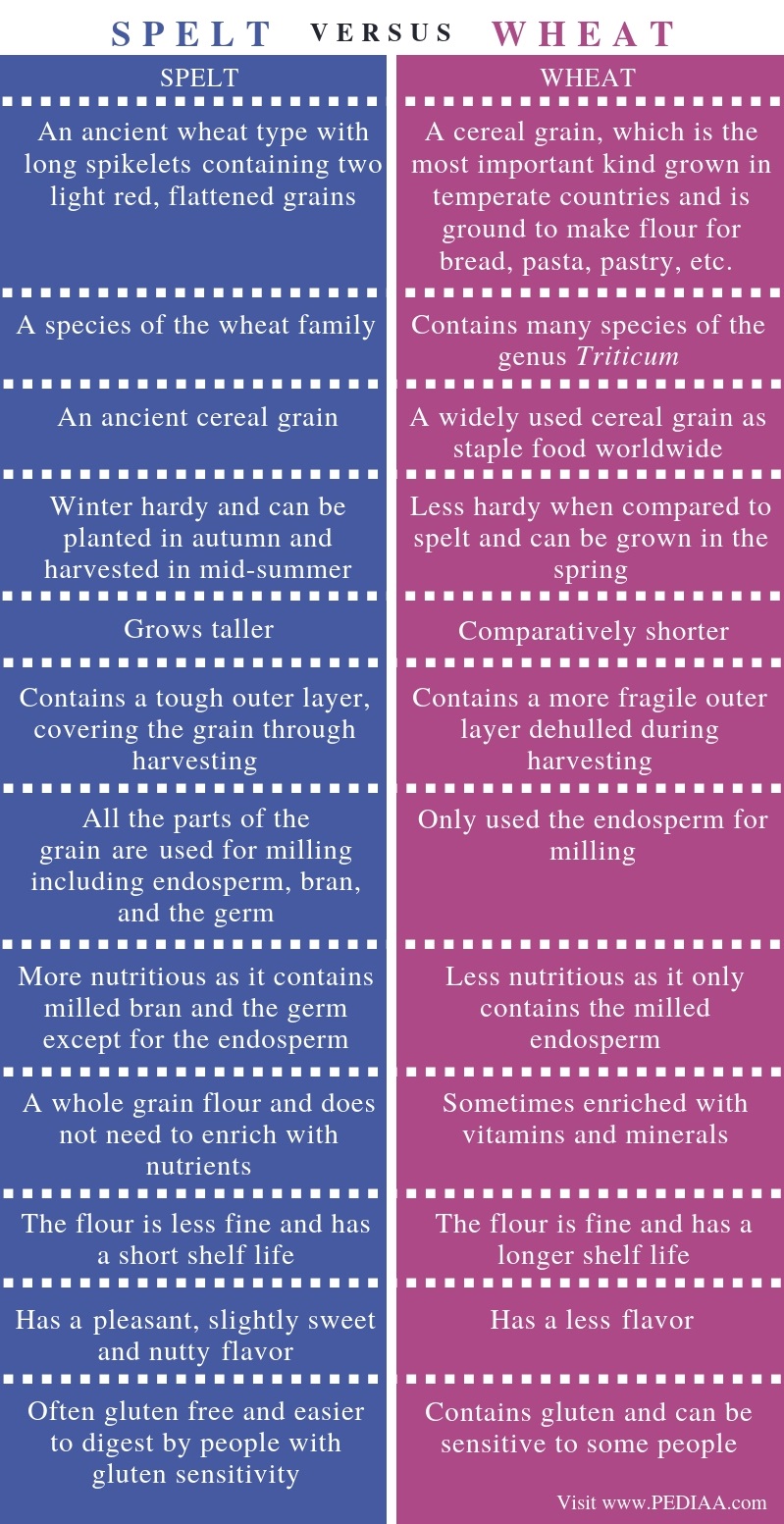 Spelt (Triticum spelta) is an ancient cereal grain cultivated since approximately 5000 BC. Generally, the spelt plant is a naturally evolved hybrid of ancient prairie grasses. Moreover, it is a species of the wheat family and is also known as dinkel wheat or hulled wheat. Its flour is used for baking bread. Moreover, it thrives in different types of soils. Further, it has less demand for nutrients. Additionally, spelt is more competitive against weeds. Also, this plant grows much taller. However, as spelt can grow in winter, it is also called the winter wheat.

Furthermore, the grain of spelt contains a tough outer covering, which is inedible. However, this hull is not removed naturally and has to be removed mechanically. Importantly, all the parts of the spelt grain, which are the endosperm, bran, and the germ, are used in milling. Therefore, spelt flour is more nutritious. 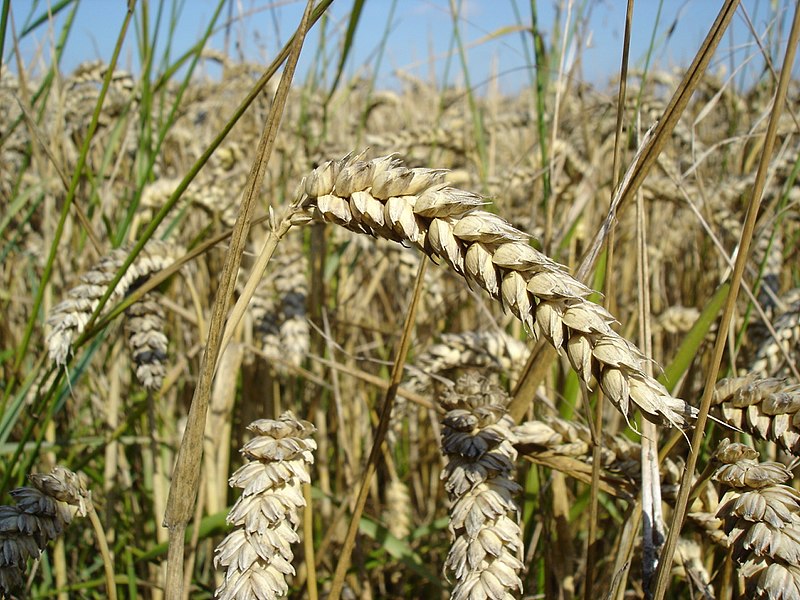 Moreover, the cultivation of wheat is mainly during the spring. Therefore, it is known as spring wheat. However, unlike spelt, the outer covering of the grain in wheat is comparatively fragile and can be easily removed from the grain. Thus, this is one of the reasons why wheat is more popular than spelt. Also, during milling, both bran and the germ are removed from the grain and only the endosperm is subjected to milling. Thus, this makes the wheat flour less nutritious.

Similarities Between Spelt and Wheat

Difference Between Spelt and Wheat

Spelt refers to an ancient wheat type with long spikelets containing two light red, flattened grains, while wheat refers to a cereal grain, which is the most important kind grown in temperate countries and is ground to make flour for bread, pasta, pastry, etc. Thus, this is the main difference between spelt and wheat.

While spelt is an ancient cereal grain, wheat is a widely used cereal grain as staple food worldwide.

Spelt is winter hardy and can be planted in autumn and harvested in mid-summer, while wheat is less hardy when compared to spelt.

Besides, another difference between spelt and wheat is that spelt grows taller, while wheat grows comparatively short.

Hull of the Grain

Importantly, all the parts of the grain are used for milling in spelt, including endosperm, bran, and the germ, while the milling process only uses the endosperm of wheat.

Besides, spelt is a whole grain flour, and there is no need to enrich it with nutrients, while wheat flour is sometimes enriched with vitamins and minerals.

Properties of the Flour

Furthermore, spelt flour has a pleasant, slightly sweet and nutty flavor, while wheat flour has a less flavor.

Also, while spelt is often gluten free and easier to digest by people with gluten sensitivity, wheat contains gluten and can be sensitive to some people.

Spelt is an ancient cereal grain that is an alternative to wheat flour. It is milled with all the three parts of the grain, which are the endosperm, bran, and the germ. Therefore, it has a high nutritional value. On the other hand, wheat is one of the most widely used cereal grain as a staple food. But, during milling, both bran and the germ are removed, and only the endosperm is milled. Therefore, it has a low nutritional value. Hence, the main difference between spelt and wheat is their milling process and nutritional value.