The main difference between rye and wheat is that wheat has more calories, protein and fats, while rye has more carbohydrates.

Rye and wheat are cereal grains belonging to the same family. We use both for baking various types of food and for making beverages like beer and whiskey. They have a similar appearance, but they also have distinct characteristics like the taste and nutritional profile. 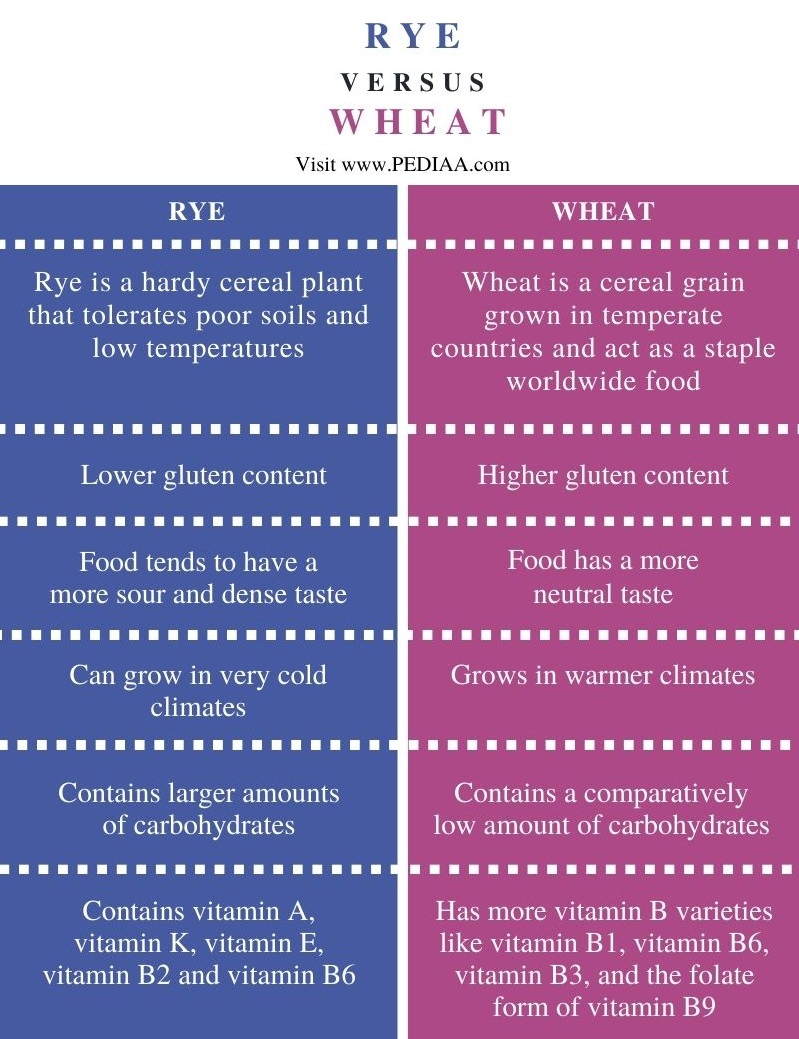 Rye is a cereal grain that is closely related to plants like wheat, barley, millet, and sorghum. These are edible grasses that include various edible components like the germ, endosperm, and the bran. It’s a sturdy plant growing well in cold climates and can tolerate frost and drought. It is especially popular in Eastern European countries, and most of the world’s rye crops come from Russia, Poland, and Germany.

We use rye for both human and animal consumption. Rye flour is known for being low in gluten and high in soluble fibre. Some common food and beverages like bread, crackers, beer, and whiskey contain rye. Rye flour is like wheat flour and is used for baking. When making bread, rye is often combined with wheat flour. Bread made entirely with rye is flat and has a dense texture. But gluten in wheat flour allows the bread to rise and become airy. We use whole grain rye in breakfast cereals and a variety of baked goods, as well. As mentioned above, rye is also used to make beverages like beer and whisky. Jack Daniels, Bulleit, and Rittenhouse are rye whiskies. Rye beer, on the other hand, is a substitute for traditional barley.

Wheat is one of the most used cereal grains in the world. Wheat flour is used to make different types of popular food such as bread, cake, pasta, noodles, and various baked goods. In fact, wheat flour is one of the most common types of flour. It is made by grinding up parts of the wheat grain. Wheat grain has three main parts: endosperm, germ and bran. There are different types of flour as all-purpose flour, whole wheat flour, cake flour, bread flour, self-rising flour. Whole wheat involves all three parts, while white flour only contains the endosperm and brown flour only contains the bran and germ. Moreover, white flour is often bleached or mixed with chemicals to give it a white colour.

Wheat contains gluten, which is the protein that gives baked goods their structure. When we knead a dough, glutens develop and become more elastic. Strong flours made from hard, high-protein wheat have higher gluten content. Weak flour, which is made from low-protein, softer wheat, has less gluten content.

Similarities Between Rye and Wheat

Difference Between Rye and Wheat

Rye is a hardy cereal plant that tolerates poor soils and low temperatures while wheat is a cereal grain grown in temperate countries and act as a staple worldwide food.

Rye typically has a lower gluten content than wheat.

Rye can grow in very cold climates, while wheat grows in warmer climates.

Wheat has more calories, protein and fats, while rye has more carbohydrates. Rye also has more types of vitamins, including B vitamins, vitamin A, vitamin E and vitamin K. Moreover, rye typically has a lower gluten content than wheat. Thus, this is the main difference between rye and wheat.