Spore and endospore are two resistant structures living organisms produce. Both are capable of giving rise to a new individual. 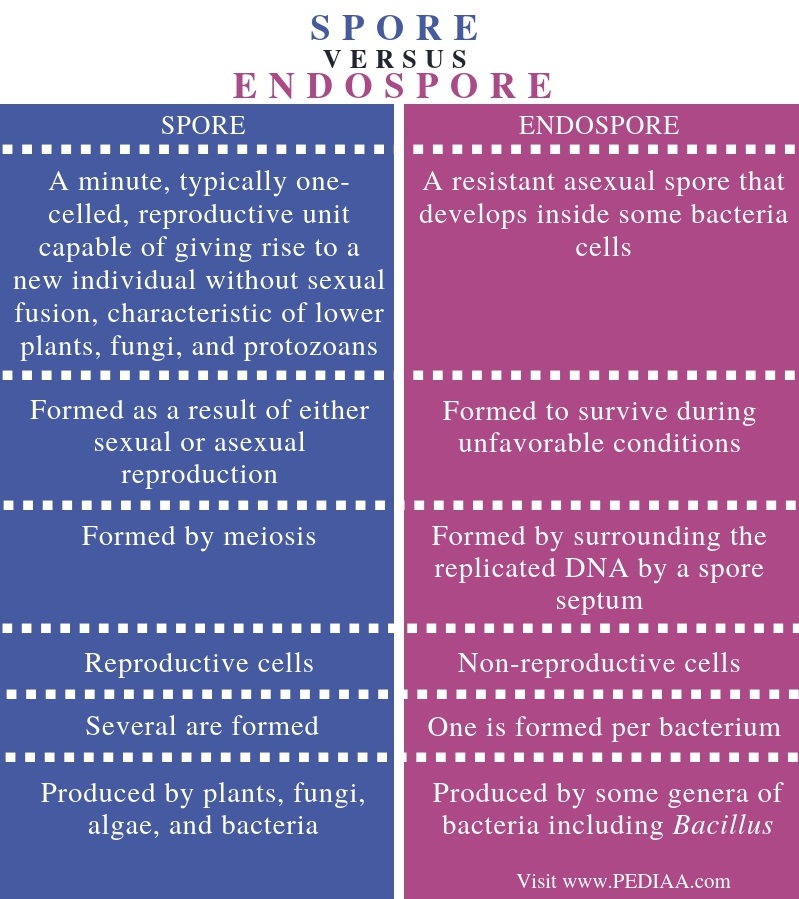 What is a Spore

A spore is a reproductive cell that is dormant and resistant to extreme environmental conditions. When the environmental conditions become favorable, a spore can germinate to produce a new individual. However, it does not undergo the fusion of gametes during the formation of a new individual. Moreover, both asexual and sexual reproduction can produce spores. Therefore, spore formation is a type of reproduction in living organisms, mainly including plants, fungi, algae, and bacteria.

In organisms with an alteration of generations between haploid and diploid phases, spores are usually haploid and produced by meiosis in the sporangium of a diploid sporophyte. Following germination, it produces a multicellular gametophyte by undergoing mitosis. Furthermore, in plants, spores represent the asexual generation. Besides, the two main types of spores the angiosperms and gymnosperms form are microspores, which give rise to the male gametophyte, and macrospores, which give rise to the female gametophyte.

What is an Endospore

An endospore is a highly resistant and dormant structure formed in response to unfavorable environmental conditions. Certain bacteria from the phylum Firmicutes including Bacillus and Clostridium produce endospores. However, as endospores are not reproductive structures, they do not produce an offspring.

Generally, endospore-forming bacteria are Gram-positive, and lack of nutrients is the main reason that triggers endospore formation. Moreover, endospores are resistant to heat, desiccation, chemicals, and radiation. They enable bacteria to lie dormant for long periods. With favorable environmental conditions, endospores revert themselves into the vegetative state.

Moreover, endospore formation is marked by the surrounding of the replicated DNA by a spore septum. Therefore, the main components of an endospore are the bacterium’s DNA, ribosomes and large amounts of dipicolinic acid. Here, dipicolinic acid is a chemical compound responsible for enabling the heat tolerant nature of the endospore. Furthermore, it forms a complex with calcium ions, which binds with water molecules, dehydrating the endospore. Additionally, this complex protects the DNA inside the endospore.

Similarities Between Spore and Endospore

Difference Between Spore and Endospore

Spore refers to a minute, typically one-celled, reproductive unit capable of giving rise to a new individual without sexual fusion, characteristic of lower plants, fungi, and protozoans while an endospore refers to a resistant asexual spore that develops inside some bacteria cells. Thus, this is the main difference between spore and endospore.

Additionally, organisms produce more than one spore at a time while a bacterium produces a single endospore. Hence, this is also a difference between spore and endospore.

Plants, fungi, algae, and bacteria produce spores while some genera of bacteria including Bacillus produce endospores.

Moreover, an important difference between spore and endospore is their function. Spores have a role in reproduction while endospores are responsible for the survival of bacteria during unfavorable conditions.

A spore is a reproductive structure produced by plants, fungi, algae, and bacteria as a result of either asexual or sexual reproduction. They are mainly haploid and are formed by meiosis. Upon germination, they give rise to a new individual of the species. On the other hand, endospore is a non-reproductive structure of certain bacteria produced in response to unfavorable environmental conditions. They protect the genetic material for a long period of time and revert back to the vegetative stage under favorable conditions. Therefore, the main difference between spore and endospore is their role.