The stele and vascular bundle are two parts of the central stem and root. Generally, the stele includes the primary vascular tissue, medullary rays, the pericycle, and the pith. 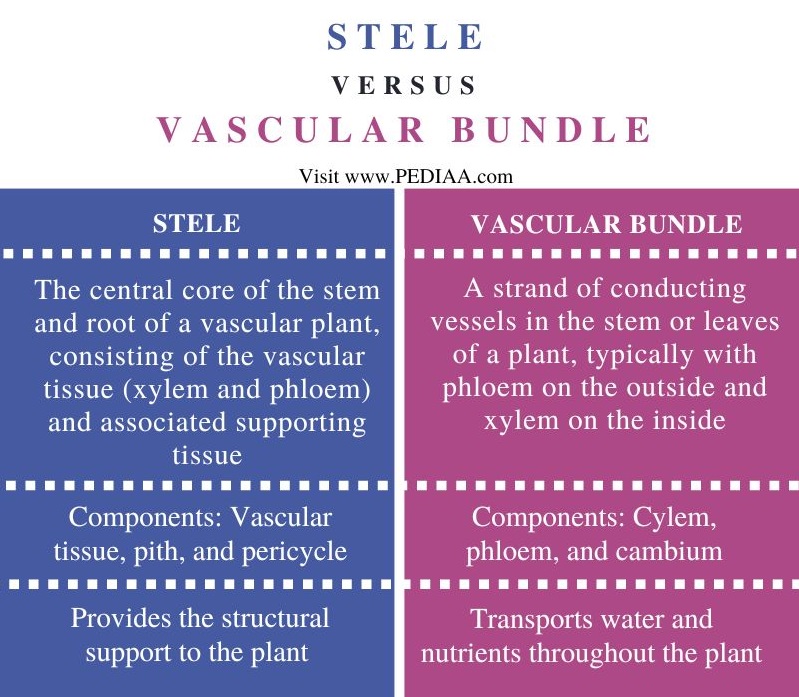 Generally, the stele is the central part of the stem. It stele contains the cells from procambium. The three components of the stele are the vascular tissue, pith, and pericycle. The epidermis, which is the innermost cell layer of the cortex, occurs outside of the stele. There are two types of stele: they are protostele and siphonostele. The early vascular plants contain the protostele. It also contains a central core of vascular tissue. In general, it contains the cylindrical strand of the xylem, surrounded by a region of phloem. However, the endodermis occurs surrounding the protostele. In addition, there are three types of protostele: haplostele, actinostele, and plectostele.

Among them, haplostele contains a cylindrical core of the xylem surrounded by a ring of phloem. Whereas, the actinostele is a variation of the protostele in which the core is lobed or fluted. Meanwhile, plectostele contains plate-like regions of the xylem. Furthermore, the second type of stele, the siphonostele, contains the central region of ground tissue called the pith. Moreover, there are three types of siphonostele: the solenostele, dictyostele, and eustele.

What is Vascular Bundle

The vascular bundle is the transport system of the plant. The two types of transport systems of plants are the xylem and the phloem. Other than them, the vascular bundle contains supportive and protective tissues. In between the xylem and phloem, there is cambium tissue. In both stem and root, the xylem typically lies towards the axis (adaxial) with the phloem positioned away from the axis (abaxial). Meanwhile, in the leaf, the adaxial surface of the leaf will usually be the upper side, with the abaxial surface the lower side. 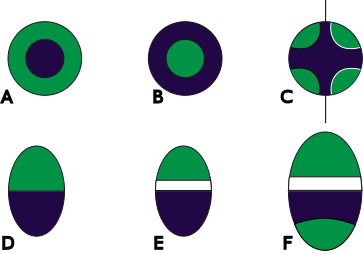 Moreover, the basic types of cells of a vascular bundle include parenchyma, sclerenchyma, and collenchyma cells. In addition to that, there are various types of vascular bundles: (A) concentric, periphloematic, (B) concentric, perixylematic, (C) radial with inner xylem, here with four xylem-poles, left closed, right open, (D)  collateral closed, (E) collateral open, (F) bicollateral open, as described in figure 3.

Concerning the functions, the main function of the vascular bundle is to transport water and food throughout the plant while providing structural support to the plant.

Similarities Between Stele and Vascular Bundle

Difference Between Stele and Vascular Bundle

Stele refers to the central core of the stem and root of a vascular plant, consisting of the vascular tissue (xylem and phloem) and associated supporting tissue, while vascular bundle refers to a strand of conducting vessels in the stem or leaves of a plant, typically with phloem on the outside and xylem on the inside.

Usually, parts of the stele include vascular tissue, pith, and pericycle, while parts of a vascular bundle include the xylem, phloem, and cambium.

The stele provides structural support to the plant while the vascular bundle transports water and nutrients throughout the plant.