The main difference between villi and microvilli is that villi are small projections on the mucous membrane, particularly in the small intestine. But, microvilli are tiny extensions that mainly occur on the cell membrane of different organs. Furthermore, villi increase the surface area while microvilli are responsible for absorption and secretion, increasing the surface area.

In brief, villi and microvilli are two types of projections that occur on the internal surfaces of different organs. Generally, both are responsible for increasing the surface area. 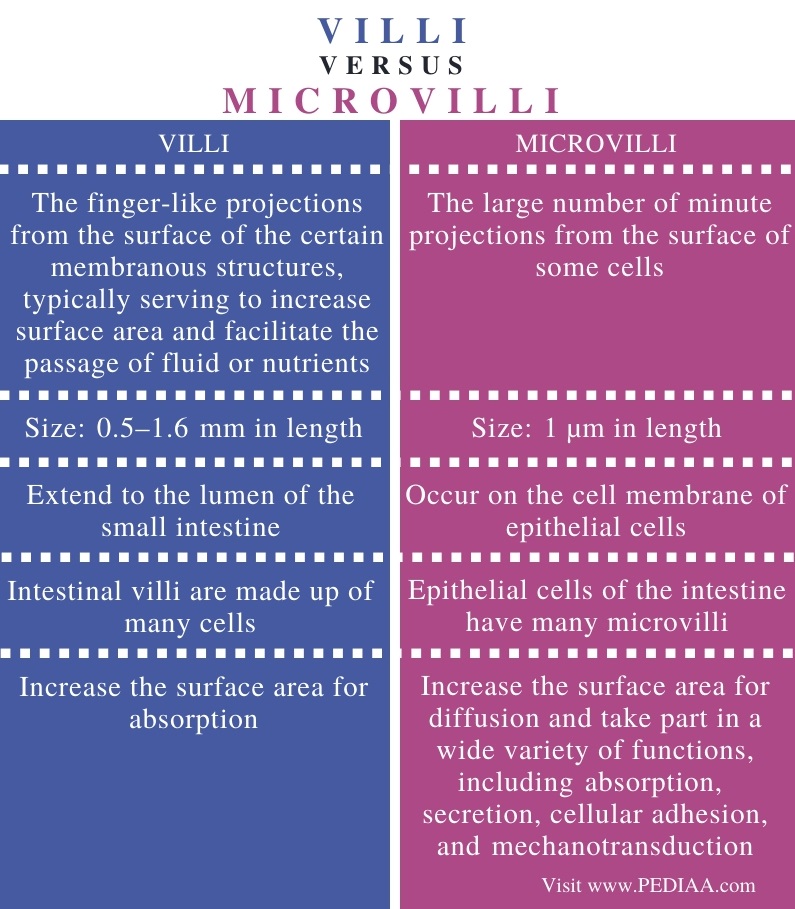 Villi are small, finger-like projections extending into the lumen of the small intestine. In humans, the villus is approximately 0.5–1.6 mm in length. Each villus contains many microvilli, projecting from the epithelial cells of the intestine. Moreover, villi and microvilli collectively form the brush border. Within the brush border, microvilli form the smallest folds on the comparatively larger folds called villi. However, the lumen of the intestine contains circular folds, which are much larger than villi. 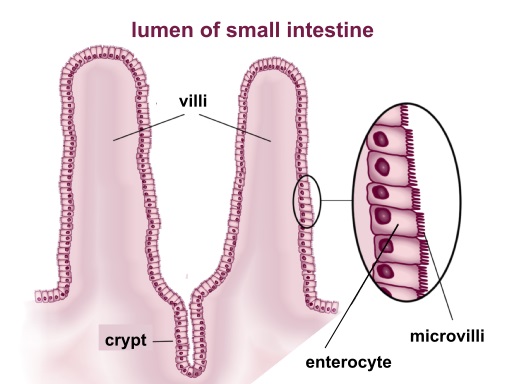 Furthermore, the main function of the villi is to increase the internal surface area of the intestinal wall. It produces a greater surface area for the absorption of nutrients. Generally, the digested nutrients such as amino acids and monosaccharides pass into the villi through diffusion. Besides, villi increase the effectiveness of diffusion by the average distance traveled by nutrient molecules by increasing the surface area.

Microvilli are microscopic protrusions on the cell surface, increasing the surface area of the cell. Therefore, they minimize any increase in the volume of the cell. Generally, microfilaments form the core of the microvillus. Moreover, they are typically held together by cross-linking of proteins such as fimbrin, villin, and epsin. 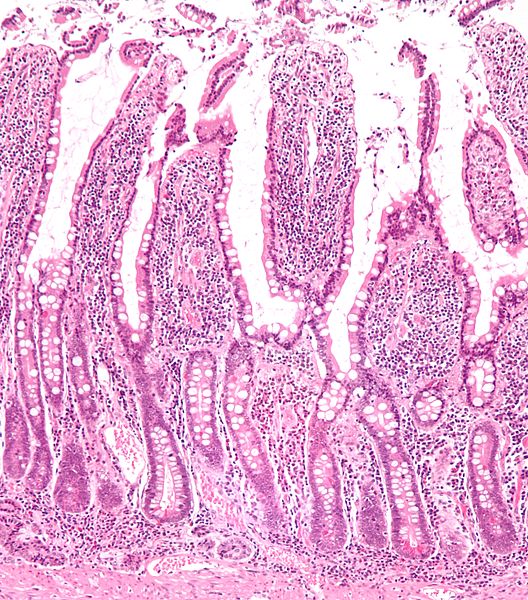 However, microvilli are shorter and narrower when compared to cilia. Typically, they are 0.5 to 1.0 µm long and 0.1 µm thick. The main function of microvilli is to enhance the absorption of nutrients from the small intestine. Meanwhile, the glycocalyx layer, which covers microvilli, allows the binding of substances to the microvilli in order to get absorbed. On the other hand, microvilli facilitate carbohydrate digestion. Furthermore, microvilli occur on the surface of egg cells as well. Basically, they allow the anchoring of the sperm cells to the egg cell. Microvilli also occur on the surface of white blood cells, allowing them to migrate. Besides, they are present in sensory organs like nose, mouth, and ears.

Similarities Between Villi and Microvilli

Difference Between Villi and Microvilli

Villi extend to the lumen of the small intestine while microvilli occur on the cell membrane of epithelial cells.

Intestinal villi are made up of many cells while epithelial cells of the intestine have many microvilli.