Endometriosis and adenomyosis are two disorders in the endometrial tissue, which lines the uterus. Generally, these misplaced endometrial cells follow the menstrual cycle, bleeding monthly.

Endometriosis is an estrogen-dependent benign inflammatory disease, which is a disorder of the endometrial tissue. Generally, it is characterized by the presence of ectopic endometrial implants mainly in the pelvis or in the upper abdomen. Furthermore, the most common locations of these implants include the ovaries,  anterior/posterior cul-de-sac, broad and uterosacral ligaments, uterus, Fallopian tubes, sigmoid colon, and appendix in the descending order. The growth of these implants depends on the steroid hormones produced by the ovaries. Therefore, the disease is more common in women ages 25-35. 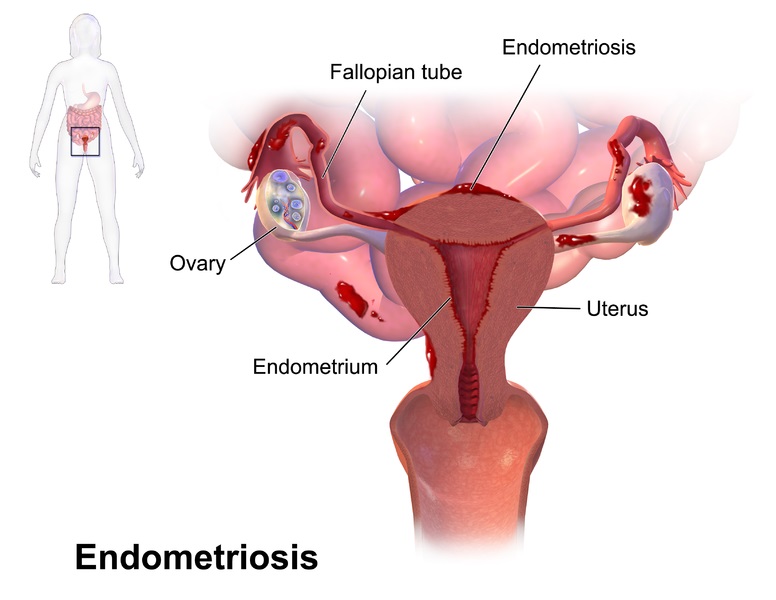 Furthermore, the main symptom of endometriosis is asymptomatic infertility. In addition to this, the other symptoms include dyspareunia, dysmenorrhea, bladder/bowel symptoms, and pelvic pain. Moreover, the most definite causes for endometriosis can be retrograde menstruation, coelomic metaplasia, altered immunity, and metastatic spread. Here, retrograde menstruation is the free passage of the endometrial tissue in a retrograde fashion into the peritoneal cavity through Fallopian tubes.

Adenomyosis is a gynecologic condition of the endometrial tissue of the uterus characterized by the presence of ectopic endometrial tissue within the uterine myometrium. In simple words, the lining of the uterus grows deep into the muscle wall while getting thicker. Therefore, it is also called internal endometriosis. The most common symptom of adenomyosis is, therefore, the heavy as well as more painful menstrual periods. 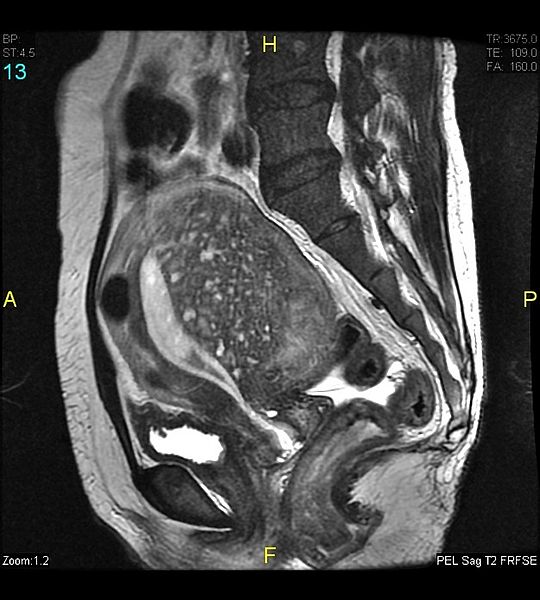 Moreover, the most definitive etiology of adenomyosis is the disrupted boundary between the deepest layer of the endometrium (endometrium basalis) and the underlying myometrium, causing inappropriate proliferation of endometrial tissue into the myometrium. In addition to this, other causes can be the inappropriate differentiation of pluripotent Mullerian stem cells, altered lymphatic drainage pathways as well as displaced bone marrow stem cells.

Furthermore, biopsy or more often hysterectomy and non-invasive, including ultrasound and MRI can be used for the histological diagnosis of adenomyosis. Generally, the presence of endometrial stroma and glandular tissue within the smooth muscle of the myometrium is the histologic diagnosis of the disease. However, a ‘boggy’ enlarged uterus due to increased vascularization is the classic physical form of examination of adenomyosis.

Similarities Between Endometriosis and Adenomyosis

Difference Between Endometriosis and Adenomyosis

Endometriosis refers to a condition resulting from the appearance of endometrial tissue outside the uterus and causing pelvic pain, especially associated with menstruation. However, adenomyosis refers to a condition in which the endometrial tissue breaks through the muscle wall of the uterus, causing menstrual cramps, lower abdominal pressure, bloating before menstrual periods, and heavy periods.

Establishment of the Endometrial Cells

The most definite causes for endometriosis include retrograde menstruation, coelomic metaplasia, altered immunity, and metastatic spread while the most definitive causes of adenomyosis include the inappropriate proliferation of endometrial tissue into the myometrium, differentiation of pluripotent Mullerian stem cells, altered lymphatic drainage pathways as well as displaced bone marrow stem cells.

Endometriosis occurs in both old and women in the reproductive age, while adenomyosis mainly occurs in older women.

The risk factors of endometriosis include the earlier onset of menstruation, shorter menstrual cycle, taller height, consumption of alcohol and caffeine, etc. On the other hand, the risk factors of adenomyosis include having more than one child, treated with breast cancer, having surgery in uterus, depression, etc.

Endometriosis causes pain and may affect fertility while adenomyosis causes thickening of the walls of the uterus, and it has recently been associated with infertility.