What is DNA Methylation 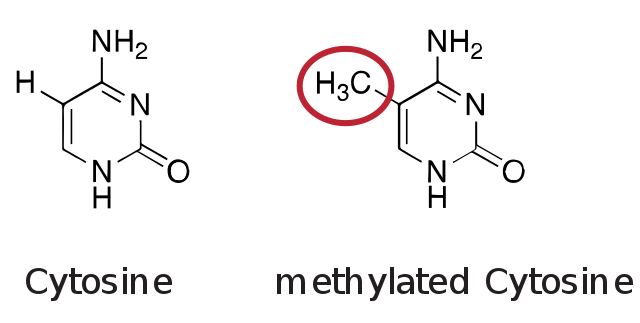 The unmethylated CpG sites can be either randomly distributed or arranged in clusters. The clusters of CpG sites are called ‘CpG islands’. These CpG islands occur in the promoter region of many genes. The housekeeping genes, which are expressed in most of the cells, contain unmethylated CpG islands. In many cases, the methylated CpG islands cause the repression of genes. Hence, DNA methylation controls the expression of genes in different tissues as well as at specific times in life such as at embryonic development. Throughout the evolution, DNA methylation is important as a defense mechanism in the host cell in silencing replicated transposable elements, repetitive sequences, and foreign DNA such as viral DNA.

What is the Effect of DNA Methylation on Gene Expression

The epigenetic marking of the CpG sites of the genomes is unique to species. It is stable throughout the lifetime as well as heritable. Many CpG sites are methylated in the human genome. The main function of DNA methylation is to regulate the gene expression depending on the requirements of a particular cell. Typical DNA methylation landscape in mammals is shown in figure 2.

What is the Role of DNA Methylation in Cell Functioning

Generally, DNA methylation patterns in a particular cell are very stable and specific. It is involved in the tissue-specific gene expression, inactivation of X chromosome, and genomic imprinting.

The cells of the tissues are differentiated to perform a specific function in the body. Therefore, proteins that serve as structural, functional, and regulatory elements of the cells should be expressed in a differential manner. This differential expression of proteins is achieved by the differential patterns of DNA methylation of genes in each type of tissues. As genes in the genome in every type of cells in a particular organism are the same, the genes that need not be expressed in a tissue contains methylated CpG islands in their regulatory sequences. However, the patterns of DNA methylation during the embryonic development differ from those in the adult stage. In cancer cells, the regular pattern of DNA methylation differs from a normal cell of that tissue. DNA methylation patterns in normal and cancer cells are shown in figure 3.

Genomic imprinting refers to the selective expression of genes depending on the origin of the parental chromosome. As an example, the paternal copy of the insulin-like growth factor 2 (IGF2) gene is active while the maternal copy is inactive. However, the opposite is true for the H19 gene, which is closely located on the IGF2 gene in the same chromosome. About 80 genes of the human genome are imprinted. DNA methylation is responsible for the inactivation of one parental copy of a particular gene.

The regulation of gene expression through epigenetic changes in genes is a stable and heritable characteristic of many genomes. One of the key mechanisms of epigenetic gene regulation is DNA methylation. DNA methylation is the permanent addition of a methyl group to a cytosine residue in a CpG site. Methylated CpG islands near the regulatory sequences of genes repress the transcription of that particular genes. Hence, these genes remain silent. The silence of genes through DNA methylation is important in tissue-specific gene expression, X-inactivation, and genomic imprinting.