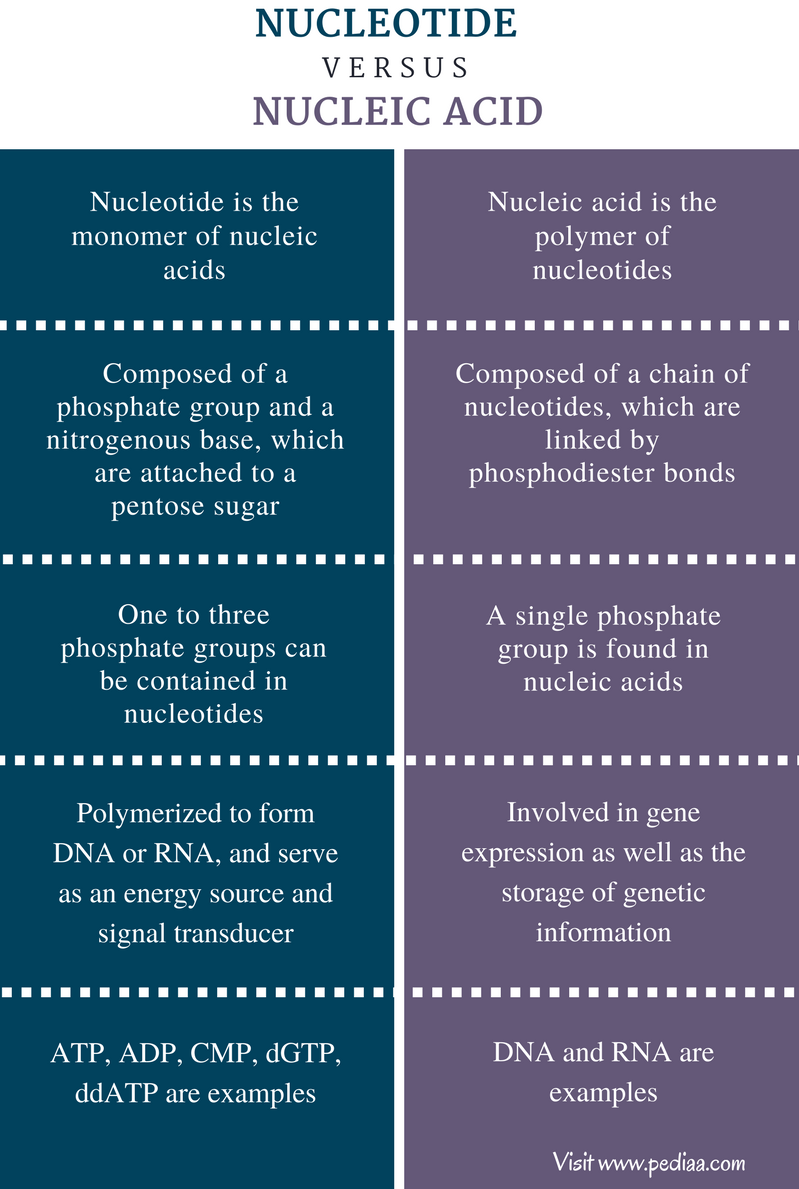 What is a Nucleic Acid

A nucleic acid can be either a DNA or RNA, which is a polymer of nucleotides. A phosphodiester bond is formed between 5′ phosphate group of the first nucleotide and the 3′ OH group of the second nucleotide by removing diphosphate in order to obtain the energy to form the bond. When ribose is the sugar in the nucleotide, the resultant polynucleotide is called RNA. On the contrary, when the pentose sugar is deoxyribose, the resultant polynucleotide is called DNA. The nitrogenous bases in RNA are adenine, guanine, cytosine and uracil. Nevertheless, in DNA, uracil is replaced by thymine.

DNA is a double-stranded molecule, where the two strands of the DNA are held together by hydrogen bonds forming between complementary nucleotides. Adenine is complementary to thymine and uracil whereas cytosine is complementary to guanine. DNA consists of a directionality in each of the two chains. One chain in the double-stranded structure bears a 3′ to 5′ directionality, while the other chain bears a 5′ to 3′ directionality. DNA is found inside the nucleus, storing the genetic information of the cell. RNA is a shorter molecule than DNA. RNA is formed during transcription of genes in the genome by RNA polymerase. Several types of RNA are found within the nucleus like mRNAs, tRNAs, rRNAs and microRNAs. Most of the RNA types are involved in the protein synthesis. The structure of DNA and RNA are shown in figure 2. 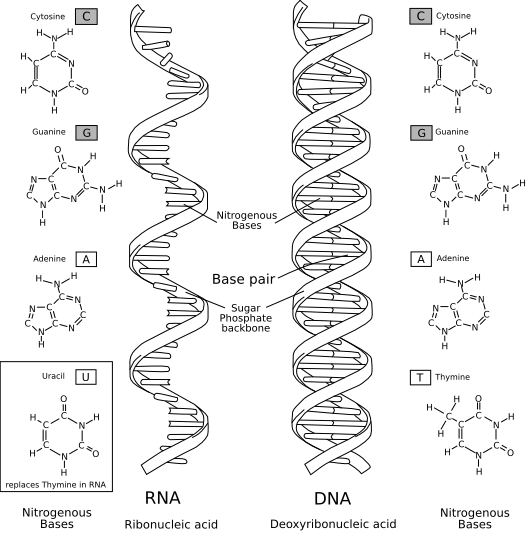 Figure 2: Structure of DNA and RNA

What is a Nucleotide

A nucleotide is a compound containing a nitrogenous base and a phosphate group attached with a pentose sugar, which can be either a ribose or a deoxyribose. Two types of nitrogenous bases can be attached to nucleotides: purine and pyrimidine. Purine bases are adenine and guanine, and pyrimidine bases are cytosine, uracil and thymine. Either one, two or three phosphate groups can be attached to the 5’ carbon of the pentose sugar. The dGMP and GMP nucleotides are shown in figure 1.

Nucleotides are the monomers of nucleic acids. Polymerization of nucleotides, which contain ribose as the sugar, forms RNA and the polymerization of nucleotides, which contain deoxyribose as the sugar, forms DNA. Nucleotides also serve as an energy source. As an example, ATP is the widely using chemical energy source in many biochemical processes. The GTP also serves as the energy source for protein synthesis. On the other hand, cyclic AMP is involved in the signal transduction pathways of both nervous system and endocrine system. Other than that, dideoxynucleotides are used in sequencing for the chain termination.

Difference Between Nucleotide and Nucleic Acid

Nucleotide: Nucleotide is the monomer of nucleic acids.

Nucleic Acid: Nucleic acid is the polymer of nucleotides.

Nucleotide: Nucleotide is composed of a phosphate group and a nitrogenous base, which are attached to a pentose sugar.

Nucleic Acid: Nucleic acid is composed of a chain of nucleotides, which are linked by phosphodiester bonds.

Nucleotide: One to three phosphate groups can be contained in nucleotides.

Nucleotide: Nucleotides are polymerized to form DNA or RNA. They serve as an energy source and signal transducer.

Nucleic Acid: Nucleic acids are involved in gene expression as well as the storage of genetic information.

Nucleic Acid: DNA and RNA are the examples of nucleic acids.