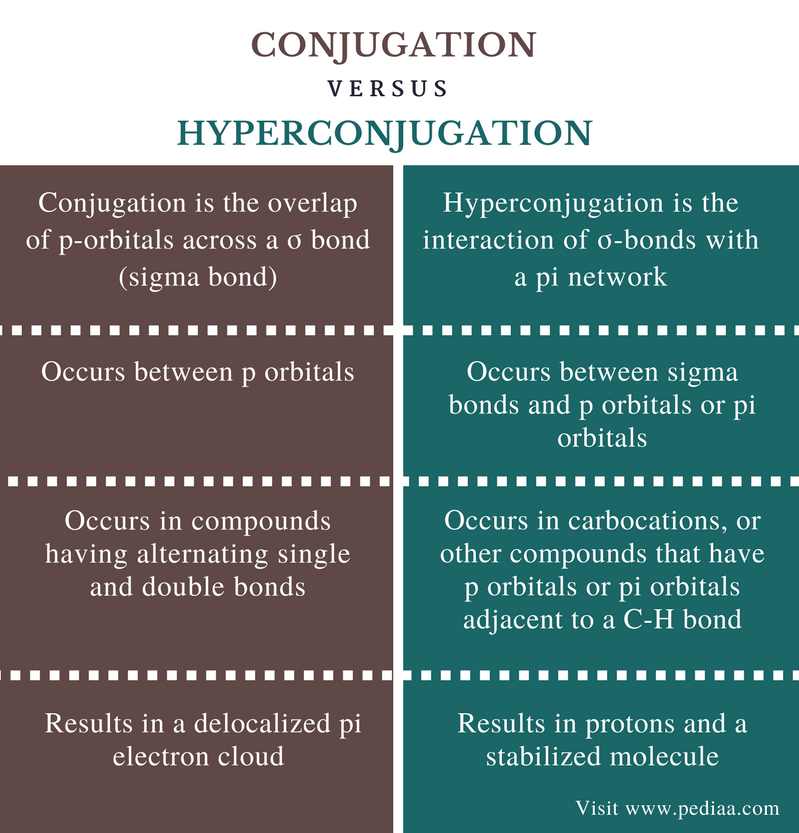 Conjugation is the overlap of p-orbitals across a σ bond (sigma bond). A sigma bond is a type of a covalent bond. Unsaturated compounds having double bonds are composed of one sigma bond and a pi bond. The carbon atoms of these compounds are sp2 hybridized. Since the hybridization is sp2, there is an un-hybridized p orbital per each carbon atom. When a compound has alternating single bonds (sigma bonds) and double bonds (a sigma bond and a pi bond), the un-hybridized p orbitals can get overlapped with each other, forming an electron cloud. The electrons in those p orbitals then get delocalized inside this electron cloud. This kind of delocalized system is known as a conjugated system. Hence, this overlapping of p orbitals is known as conjugation.

Hyperconjugation is the interaction of σ-bonds with a pi network. Here, electrons in a sigma bond interact with an adjacent partially (or completely) filled p orbital, or with a pi orbital. Hyperconjugation occurs to increase the stability of a molecule.

Figure 2: Hyperconjugation Can Occur between a Pi Orbital and a Sigma Bond

Difference Between Conjugation and Hyperconjugation

Conjugation: Conjugation is the overlap of p-orbitals across a σ bond (sigma bond).