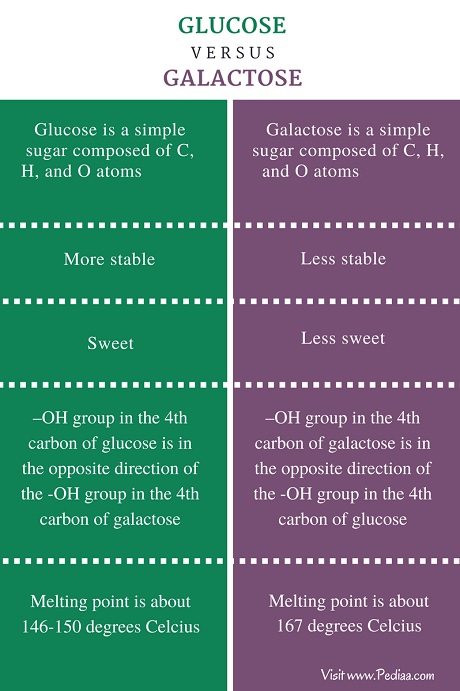 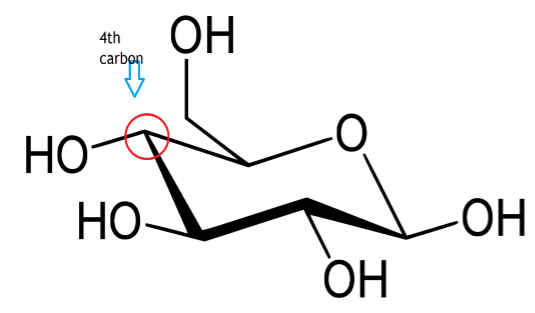 Figure 1: The chair confirmation of D-Glucose

The above image shows the general structure of glucose. This image indicates that glucose has four chiral centers. (A chiral center is a carbon atom having four different groups attached to it.) Therefore, glucose has stereoisomers.

The naturally occurring glucose is known as D-Glucose. The isomer of D-Glucose is L-Glucose. But the L-Glucose does not occur naturally. Glucose is water soluble and is colorless when dissolved in water. Glucose can occur as an open chain or as a cyclic structure. But the open chain is typically unstable and spontaneously converts into cyclic form. The melting point of glucose is about 1460C (for alpha-D-Glucose).

Aqueous solutions of glucose are able to rotate plane polarized light. D-Glucose rotates light clockwise and L-Glucose rotates light anticlockwise. Glucose act as a monomer for the formation of a number of important polysaccharides. Some polymers that have glucose as the monomer include starch, cellulose, and glycogen.

Galactose is a simple sugar and a monosaccharide. The molecular formula of galactose is also C6H12O6.  Its chemical structure has four –OH groups along with a -CH2OH group. Same as glucose, galactose is also an aldohexose due to the presence of six carbon atoms and a terminal aldehyde group. 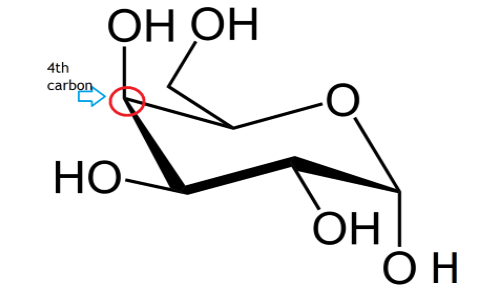 Galactose can exist either in the open chain form or the cyclic form. Galactose contributes to the formation of some disaccharides such as Lactose (Glucose + Galactose) and Galactan (composed of Galactose). The melting point of galactose is about 1670C. Galactose is also soluble in water, but the solubility is less than that of glucose.

Similarities Between Glucose and Galactose

Difference Between Glucose and Galactose

Glucose: Glucose is a simple sugar composed of C, H, and O atoms and tastes sweet.

Galactose: Galactose is a simple sugar composed of C, H, and O atoms and is less sweeter than glucose.

The main difference between glucose and galactose is the chemical structure; the position of each –OH group present in both molecules. This difference occurs in the 4th carbon atom. The following image shows this in detail. 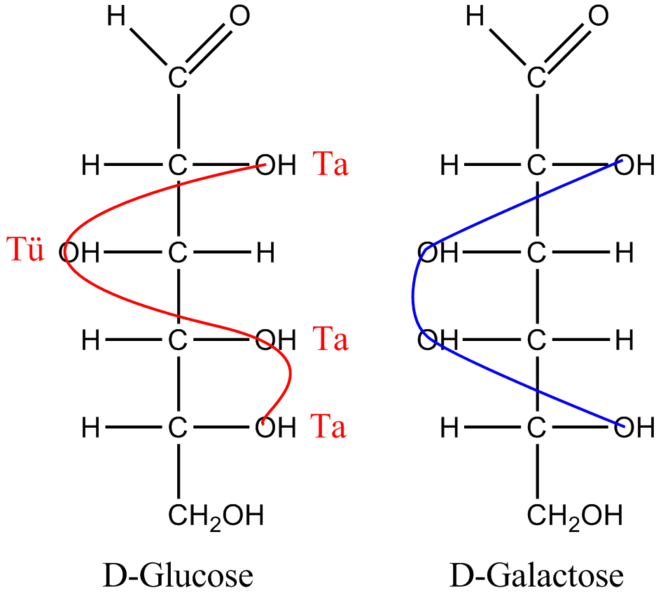 Glucose: The –OH group of the 4th carbon (from the top) of D-Glucose is directed towards right side.

Galactose: The –OH group of the 4th carbon of D-Galactose is directed towards the left side.

Glucose: The melting point of glucose is about 146-150oC.

Galactose: The melting point of galactose is about 167oC.

Glucose and Galactose are very important simple sugars as monosaccharides as well as polysaccharides, which are formed after their polymerization. The chemical formula and the molar mass of both molecules are the same, but the difference between glucose and galactose lies in the arrangement of –OH groups along the carbon chain.