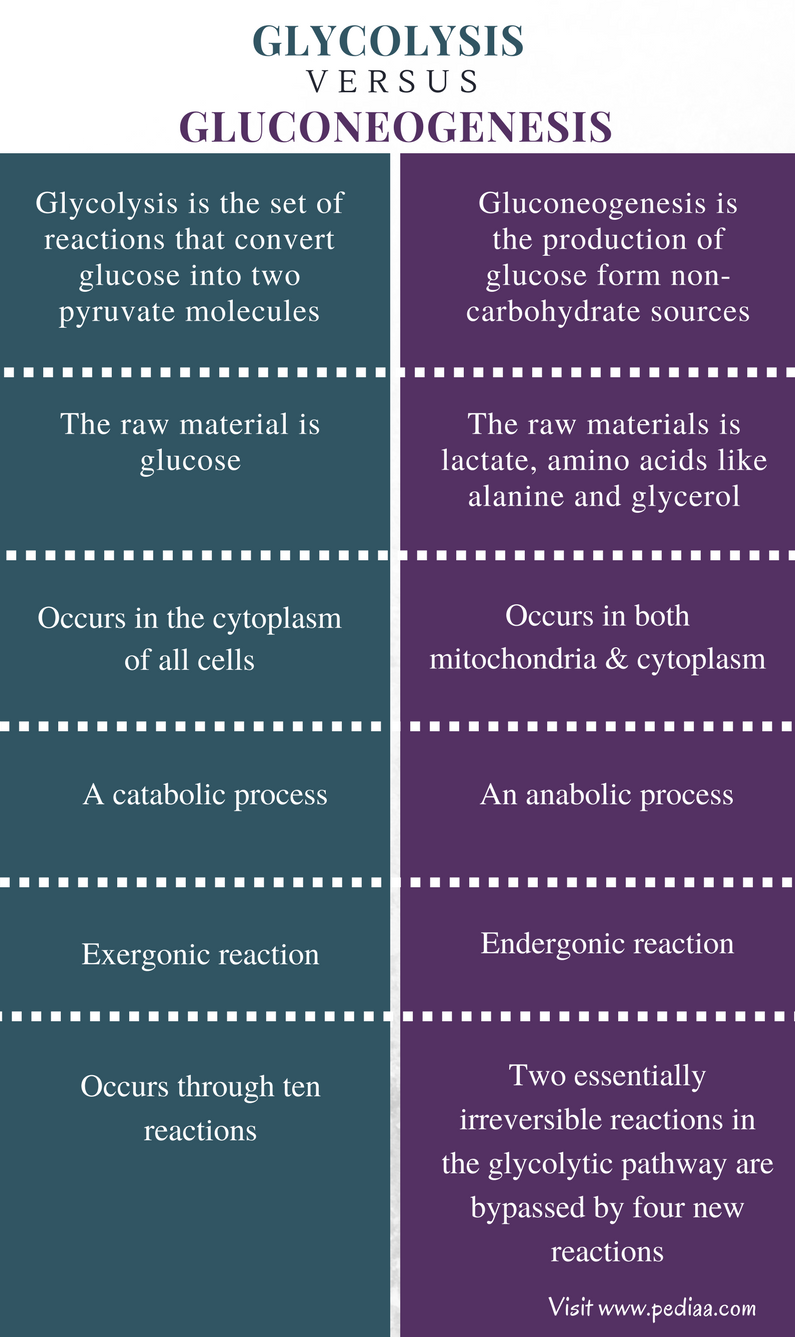 The set of reactions that convert glucose into two pyruvate molecules is known as glycolysis. Glycolysis is composed of ten reactions that occur in the cytoplasm. The whole process can be divided into three stages. During the first stage, glucose is converted into fructose 1,6-bisphosphate through phosphorylation, isomerization and second phosphorylation. By converting glucose into fructose 1,6-bisphosphate, two goals are achieved by the cell. The glucose is trapped inside the cell and converted into a compound, which can be readily cleaved into three carbon units. During the second stage, fructose 1,6-bispphosphate is cleaved into three carbon fragments, which are readily interconvertible. During the third stage, three carbon fragments are oxidized into two pyruvate molecules, harvesting ATP.  The net reaction of glycolysis is shown below. 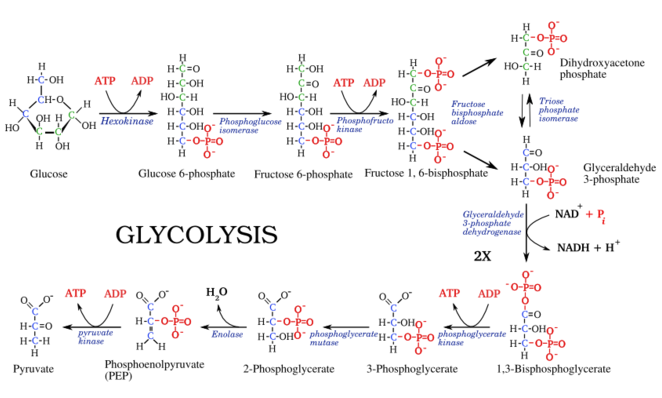 Glucose is the main source of energy for almost all the life forms on earth. Glycolysis is the first step of glucose catabolism, which is usually called as cellular respiration, where the cell breaks down glucose through series of reactions in order to produce ATP. ATP powers almost all of the cellular processes. Some cells like brain cells and muscle cells require more energy than normal cells in order to carry out their functions. Therefore, they require more glucose than the other cells.

Gluconeogenesis is the production of glucose from non-carbohydrate sources like glycerol, amino acids, and lactate. The conversion of pyruvate into glucose is roughly the same as the reverse of glycolysis. But, the three reactions which give the essential irreversibility during glycolysis are bypassed by four new reactions. Pyruvate in the mitochondria is carboxylated into oxaloacetate by two of the above mentioned new reactions. Oxaloacetate is decarboxylated and phosphorylated into phosphoenolpyruvate in the cytoplasm by the other two new reactions. The other difference between glycolysis and gluconeogenesis is the hydrolysis of glucose 6-phosphate as well as the fructose 1,6-bisphosphate. Gluconeogenesis occurs in the liver by using lactate and alanine as raw materials. These raw materials are formed by active skeletal muscles by pyruvate. The set of reactions involved in gluconeogenesis is shown in figure 2.

Gluconeogenesis is reciprocally regulated with glycolysis. When one pathway is highly active the other pathway is inhibited. The key control points are the steps regulated by fructose 1,6-bisphosphatase and phosphofructokinase enzymes. When glucose is abundant, glycolysis is activated by the signal molecule, fructose 2,6-bisphosphate, which is also found in high levels. The two enzymes, pyruvate kinase, and pyruvate carboxylase are also regulated. Allosteric regulation and reversible phosphorylation are involved in the regulation as well.

Difference Between Glycolysis and Gluconeogenesis

Glycolysis: The set of reactions that convert glucose into two pyruvate molecules is known as glycolysis.

Gluconeogenesis: Gluconeogenesis is the production of glucose form non-carbohydrate sources like glycerol, amino acids, and lactate.

Glycolysis: The raw material of glycolysis is glucose.

Glycolysis: Glycolysis occurs in the cytoplasm of all cells.

Glycolysis: Glycolysis occurs in almost all the cells in the body.

Glycolysis: Glycolysis is a catabolic process, where the glucose molecules are broken down into two pyruvate molecules.

Glycolysis: Glycolysis is an exergonic reaction where two ATPs are produced.

Glycolysis: The enzymes involved in the rate limiting steps are hexokinase, phosphofructokinase and pyruvate kinase.

Glycolysis and gluconeogenesis are two processes involved in the glucose metabolism. Glucose is the energy source of almost all the lifeforms on earth. Glucose is broken down in order to generate energy in the form of ATP during the process called cellular respiration. Glycolysis is the first step of cellular respiration, breaking down six carbon glucose into two pyruvate molecules each bearing three carbon atoms. Glycolysis occurs in the cytoplasm of almost all cells in the body. During starvation, blood glucose levels are decreased and liver and the kidneys start producing glucose from non-carbohydrate derivatives like amino acids, glycerol, and lactate, in a process called gluconeogenesis. Gluconeogenesis and glycolysis are reciprocally regulated events by maintaining a constant level of glucose in the blood. The main difference between glycolysis and gluconeogenesis is their types of metabolism in the body.