The periodic table of elements shows each and every element that has been so far discovered on the earth according to their atomic numbers (ascending order). Some of these elements are very abundant on earth whereas other elements are found in trace amounts. Hydrogen and Oxygen are two elements that are found almost everywhere on earth. The main difference between Hydrogen and Oxygen is that Hydrogen has no neutrons in its most stable isotope whereas Oxygen has 8 neutrons in its most stable isotope. 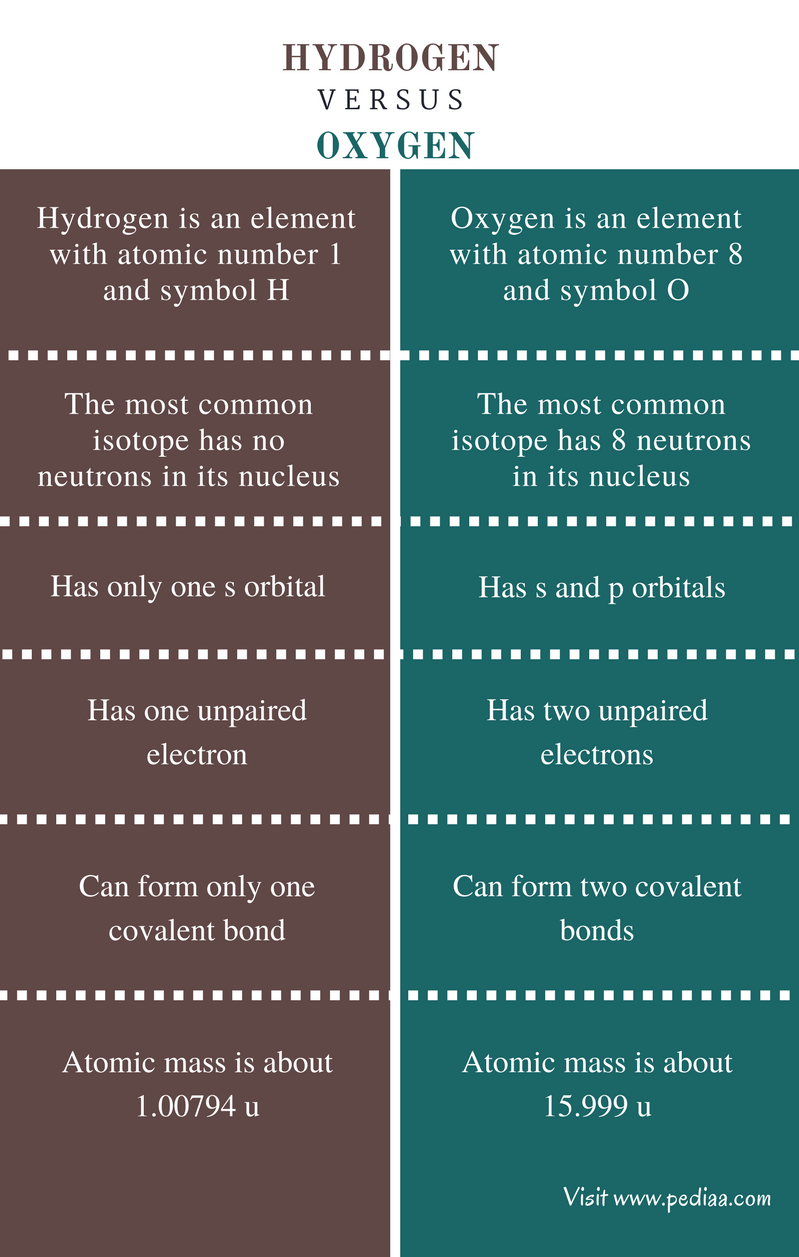 Hydrogen is an element with atomic number 1 and symbol H. It is the element that is found in the top of the periodic table. Hydrogen has three naturally occurring isotopes. They are protium, deuterium, and tritium. They differ from each other in the number of neutrons they have in their nucleus. Among these isotopes, the most commonly found isotope is protium. The abundance of protium in nature is about 98%. Therefore, the term Hydrogen typically refers to Protium.

The most common form of Hydrogen that is found in nature is water molecules. Two Hydrogen atoms are bonded covalently with one oxygen atom in a water molecule. The molecular formula of water is given as H2O. Apart from that, Hydrogen is found in hydrocarbons, many common polymers and other organic and inorganic species. Hydrogen is found in the atmosphere as Hydrogen gas. The molecular formula of Hydrogen gas is H2. There, two Hydrogen atoms are connected through a covalent bond by sharing the only electron they have.

At standard temperature and pressure, Hydrogen is a colorless, odorless and non-toxic gas. It is highly flammable. When H2 gas reacts with metal elements, it forms the H– anion. This anion is called hydride. The bond between metal and hydride is ionic, and Hydrogen atom has two electrons (paired) in hydride anion.

Oxygen is an element with atomic number 8 and symbol O. The naturally occurring Oxygen has three isotopes. They are 16O, 17O and 18O. But the most abundant form is 16O. Therefore, when we generally talk about oxygen, we are referring to 16O isotope.

Oxygen forms O2 gas. It is the gas which every living being needs for their respiration. The percentage of O2 gas in the atmosphere is about 21%. Therefore, oxygen is most abundantly found in the atmosphere. Oxygen is also found as a part of water molecules. There, the oxygen atom is attached with two Hydrogen atoms through covalent bonds. Oxygen is the second most electronegative element and is second only to Fluorine.

At standard temperature and pressure, oxygen occurs as a diatomic molecule that is odorless, colorless and non-toxic. There are two allotropes of oxygen as O2 and O3. O2 is typically called dioxygen or oxygen whereas O3 is called ozone. Ozone is mainly found in the ozone layer in the upper atmosphere.

Difference Between Hydrogen and Oxygen

Hydrogen: Hydrogen is an element with atomic number 1 and symbol H.

Oxygen: Oxygen is an element with atomic number 8 and symbol O.

Hydrogen: The most common isotope of Hydrogen has no neutrons in its nucleus.

Oxygen: The most common isotope of Oxygen has 8 neutrons in its nucleus.

Hydrogen: Hydrogen has only one s orbital.

Hydrogen: Hydrogen has one unpaired electron.

Hydrogen: Hydrogen can form only one covalent bond.

Both Hydrogen and Oxygen are very abundant in earth’s crust. Therefore, it is important to understand the difference between Hydrogen and Oxygen. These elements are found either in the gaseous phase as their diatomic molecules or as solid or liquid phases when bonded with other elements.