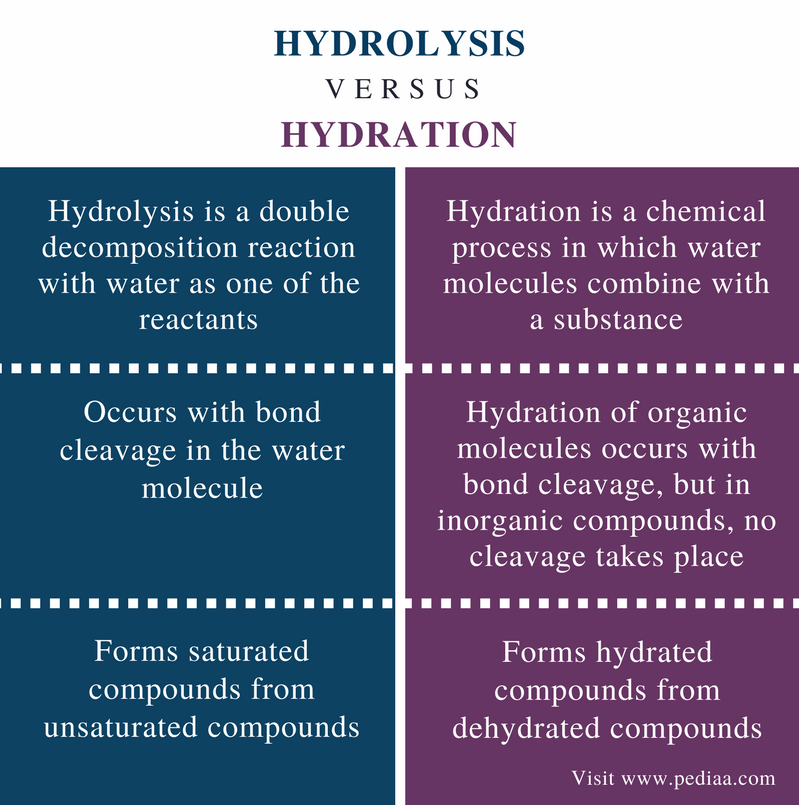 Hydrolysis is a double decomposition reaction with water as one of the reactants. In other words, it is the breaking of a bond in a molecule using a water molecule. Hydrolysis reactions are often reversible. There are three main types of hydrolysis reactions:

Water can act as an acid or a base according to the Brønsted-Lowry acid theory (according to this theory, when an acid and a base react with each other, the acid forms its conjugate base, and the base forms its conjugate acid by exchange of a proton). If water acts as a Brønsted-Lowry acid, then water molecule donates a proton. If it acts as a Brønsted-Lowry base, then the water molecule can accept a proton, forming hydronium ion (H3O+). Acid hydrolysis resembles an acid dissociation reaction.

In organic chemistry, the water molecule is added to the point where an unsaturation is present. Here, the water molecule cleaves into a proton and a hydroxide anion. The hydroxide anion forms a bond with the carbon atom that has more substituents. The proton will combine with the less substituted carbon, following the Markovnikov’s rule. Any unsaturated organic molecule is susceptible to hydration.

In inorganic chemistry, hydration refers to the association of water molecules with an inorganic compound. For example, in the sulphate process for the production of TiO2 pigments from Ilmenite sand (FeTiO3), FeSO4 is formed as a byproduct. This byproduct through crystallization via hydration. Here, FeSO4.7H2O is formed by the reaction of FeSO4 with water followed by cooling to 10oC. Then FeSO4.7H2O crystals, which can easily be removed, are formed. The crystals are ferrous sulphate heptahydrate. 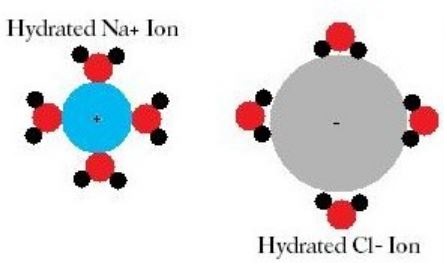 Hydration is the chemical process that occurs with desiccants. A desiccant is any compound that can absorb water vapor. Furthermore, the term hydration is also used to explain the dissolution of salt ions such as sodium ion. When a salt is dissolved in water, salt dissociates into its cations and anions. These cations and anions are separated from each other due to the hydration of the ions by water molecules. Here, the water molecules will surround the salt ion, which is called hydration.

Difference Between Hydrolysis and Hydration

Hydrolysis: Hydrolysis is a double decomposition reaction with water as one of the reactants.

Hydration:  Hydration is a chemical process in which water molecules combine with a substance.

Hydrolysis: Hydrolysis occurs with bond cleavage in the water molecule.