The main difference between RAPD and RFLP is that RAPD is a type of PCR which amplifies random fragments of DNA in a large template by using short primers whereas, in RFLP, one or more restriction enzymes digest the DNA sample, producing restriction fragments then separated by gel electrophoresis. Therefore, RADP only requires a small amount of DNA for the assay while RFLP requires a large amount of DNA. Furthermore, RAPD is a rapid process, which can detect 1-10 loci while RFLP is a slower process, which can only detect 1-3 loci. In addition, RAPD is unable to detect allelic variants while RFLP can detect allelic variants. 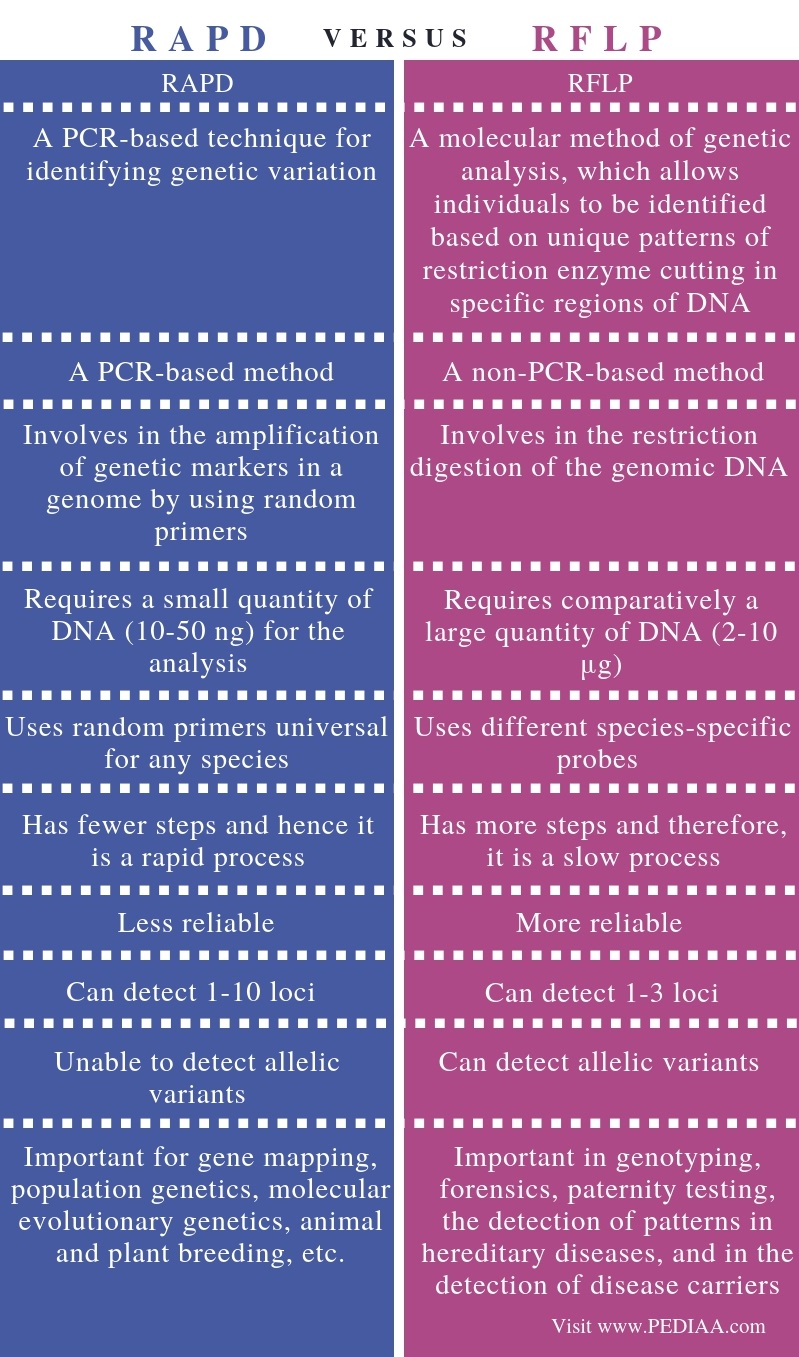 RAPD or random amplified polymorphic DNA is a fast, PCR-based method for the detection of DNA variation. Two laboratories (Williams et. al., 1990; Welsh and McClelland, 1990) independently developed the technique. Moreover, RAPD uses a single, arbitrary primer for the amplification of many discrete DNA products. The steps involved in RAPD are as follows:

Furthermore, by resolving the resulting patterns, a semi-unique DNA profile of a particular DNA sample can be generated. Due to the less specificity of the random primer used in the assay, comparatively a higher number of loci can be amplified per random primer. However, RAPD is an important technique for gene mapping, population genetics, molecular evolutionary genetics, animal and plant breeding, etc. Moreover, it is vital for beginners by means of speed, cost, efficiency as well as the number of markers generated.

RFLP or restriction length polymorphism is a method which exploits variation in homologous DNA. It is also a well-known method for its discrimination power. However, since RFLP is a non-PCR-based method, it uses restriction enzymes for the generation of fragments of the genome. Furthermore, RFLP detects the variations of lengths of restriction fragments among individuals. The three steps involved in RFLP are as follows:

Moreover, restriction enzymes used in the process are unique for a particular DNA sequence. When the recognition sequence of the restriction enzymes is shorter, a greater number of fragments can be generated. Moreover, RFLP is important in genotyping, forensics, paternity testing, the detection of patterns in hereditary diseases, and in the detection of disease carriers. However, it is a labour-intensive and time-consuming process, which requires a large amount of DNA.

Similarities Between RAPD and RFLP

Difference Between RAPD and RFLP

RAPD (random amplified polymorphic DNA) refers to a PCR-based technique for identifying genetic variation while RFLP (restriction fragment length polymorphism) refers to a molecular method of genetic analysis, which allows individuals to be identified based on unique patterns of restriction enzyme cutting in specific regions of DNA.

While RAPD involves the amplification of genetic markers in a genome by using random primers, RFLP involves the restriction digestion of the genomic DNA.

Furthermore, RAPD has fewer steps and it is a rapid process while RFLP has more steps as it is a slow process.

RAPD is less reliable while RFLP is more reliable.

Another difference between RAPD and RFLP is that RAPD can detect 1-10 loci while RFLP can only detect 1-3 loci.

RAPD is an important technique for gene mapping, population genetics, molecular evolutionary genetics, animal and plant breeding, etc. while RFLP is important in genotyping, forensics, paternity testing, the detection of patterns in hereditary diseases, and in the detection of disease carriers.

RAPD is a PCR-based technique to detect genetic markers present in a genome. Moreover, it uses random primers for the amplification of these markers. As RAPD is a PCR-based technique, it only requires a small amount of DNA. In addition, it is a fast method but, it is unable to detect allelic variants. In contrast, RFLP is a non-PCR-based method which detects DNA variation within a genome. However, it uses restriction digestion of DNA, Southern blotting and detection of sequences by using specific probes. Therefore, it is a more reliable method. But, it requires a large amount of DNA. Therefore, the main difference between RAPD and RFLP is procedure and importance.