An operating system is event-driven. An event can occur suddenly while executing a program. It will trigger the operating system to execute. This will change the user mode into kernel mode. After the execution of the OS, the control is passed back to the original program.  Traps and interrupts are two types of events. A trap is raised by a user program whereas an interrupt is raised by a hardware device such as keyboard, timer, etc. A trap passes the control to the trap handler and the interrupt passes the control to an interrupt handler. After executing the handler, the control switches back to the original program. 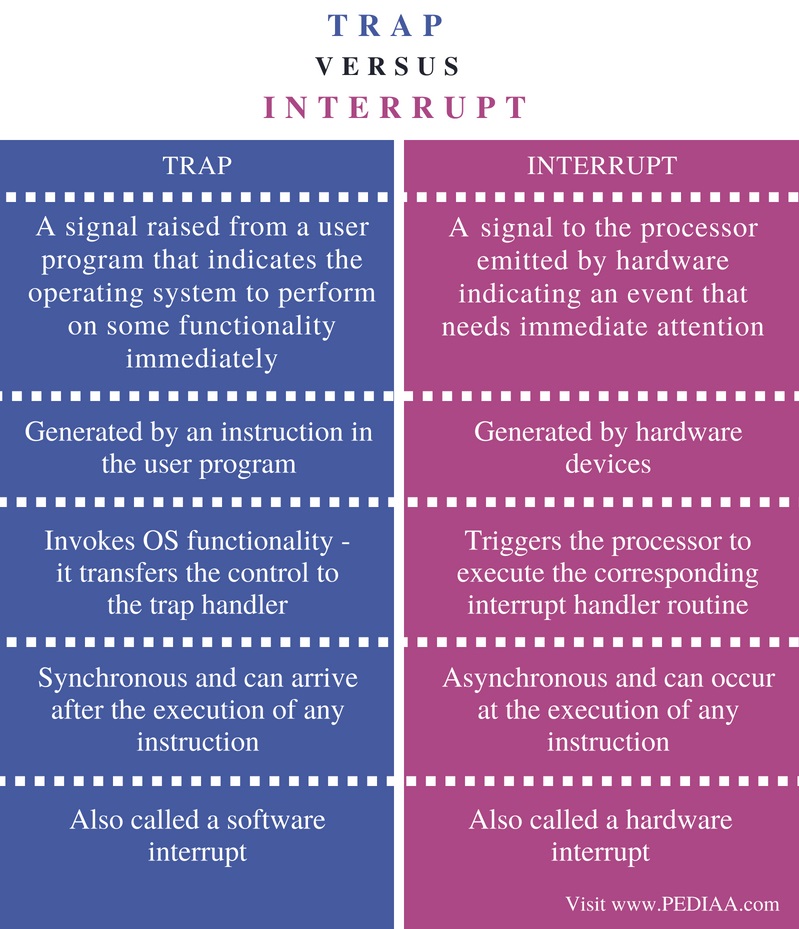 An example is as follows. Assume that there is a statement as printf (“%s\n”, str); It is will invoke the write function to print the output to the standard output which is the monitor. This will invoke a trap and it will pass the control to the trap handler. Then, the user mode changes to kernel mode and the OS executes the write call. After completing the task, the control is transferred back to the user mode from the kernel mode.

An interrupt is raised by a hardware device. USB device, NIC card, keyboard can cause interrupts. Interrupts are asynchronous. Therefore, they can occur at any time.

In addition to traps and interrupt, there is another type of event called exceptions. They are generated by the processor automatically. Exceptions further divides into faults and aborts. A fault is a recoverable error while an abort is an error that is difficult to handle.

Relationship Between Trap and Interrupt

Difference Between Trap and Interrupt

The trap is a signal raised from a user program that indicates the operating system to perform on some functionality immediately while interrupt is a signal to the processor emitted by hardware indicating an event that needs immediate attention.

Further, a trap invokes OS functionality. It transfers the control to the trap handler. An interrupt triggers the processor to execute the corresponding interrupt handler routine.