What is Tissue Fluid

The tissue fluid is the extracellular fluid that bathes and surrounds the tissue cells of multicellular animals. It arrives via blood capillaries and is removed via the lymphatic vessels. The tissue fluid is also called the interstitial fluid. The high hydrostatic pressure of blood at the arteriole end of the capillary allows the fluid to push out from the capillaries. Glucose, fatty acids, nucleic acids, amino acids, salts, minerals, and water in the blood are pushed out through capillaries into the tissue fluid and are uptaken by cells in the tissue. Tissue fluid is composed of 40% water. Neither red blood cells nor large proteins leave the blood at capillaries. However, white blood cells can migrate into the tissue fluid. After losing fluid at the capillaries, the hydrostatic pressure is low at the venule end of the capillary and the solute concentration is high. Therefore, fluid drains back into the capillary along with the metabolic wastes such as urea and carbon dioxide at their venule ends. About 90% of the fluid leaked out from blood is taken back and the remaining 10% is taken back by the lymphatic system as lymph. The formation of tissue fluid and lymph is shown in figure 1. 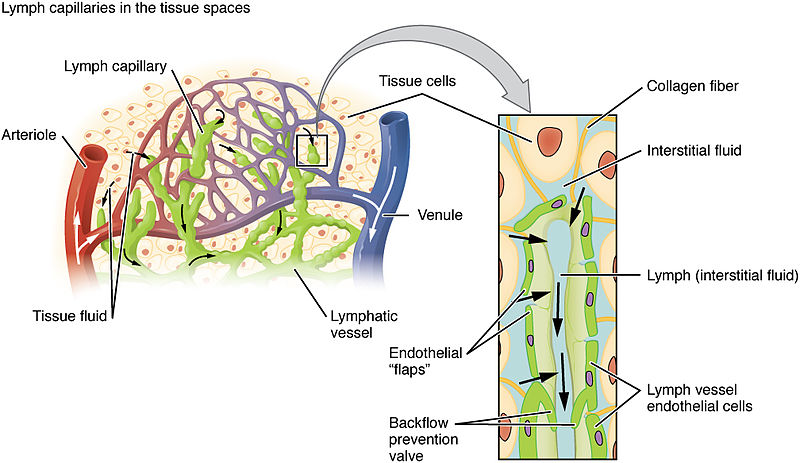 Similarities Between Tissue Fluid and Lymph

Difference Between Tissue Fluid and Lymph

Tissue Fluid: Tissue fluid is the extracellular fluid, bathing cells in the tissues, arriving into the blood capillaries, and being removed by the lymphatic system

Lymph: Lymph is a colorless fluid, containing white blood cells, bathing tissues, and draining out through the lymphatic system into the circulation.

Tissue Fluid: Tissue fluid is found in the spaces between cells in tissues.

Lymph: Lymph is found inside the lymphatic vessels.

Tissue Fluid: Tissue fluid ensures the supply of materials, nutrients, oxygen into the cells in tissues and organs, and removal of metabolic wastes from tissues.

Lymph: Lymph is involved in the removal of metabolic wastes and infectious organisms from tissues.

Lymph: Lymph contains fats absorbed from lacteals in the intestine.

Tissue fluid can be considered as the leaked plasma, which leaves blood capillaries due to the hydrostatic pressure of blood. Tissue fluid ensures the supply of nutrients, oxygen, and hormones into the cells in tissues. Most of the tissue fluid returns to the circulation along with metabolic wastes such as carbon dioxide and urea. The remaining tissue fluid in the tissue spaces forms lymph. The lymphatic system collects and pushes lymph into the circulation. The lymphatic system plays a vital role in immunity of the animal. This is the relationship between tissue fluid and lymph.

1. “Anatomy and physiology of animals The formulation of tissue fluid and lymph from blood” By  Sunshine Connelly at English Wikibooks – Transferred from en.wikibooks to Commons by Adrignola (CC BY 3.0) via Commons Wikimedia
2. “2202 Lymphatic Capillaries” By OpenStax College – Anatomy & Physiology, Connexions Web site. Jun 19, 2013. (CC BY 3.0) via Commons Wikimedia