Home » Language » What is the Difference Between Aphorism and Adage

The main difference between aphorism and adage is that an adage generally has a longer history than an aphorism.

Aphorisms and adages are short and memorable sayings expressing a general truth. Most of us use words like the adage, maxim, proverb, aphorism as synonyms, assuming that they all mean the same. However, this is not true. Despite their many similarities, these sayings do have a slight difference. So, this article looks at the difference between aphorism and adage. 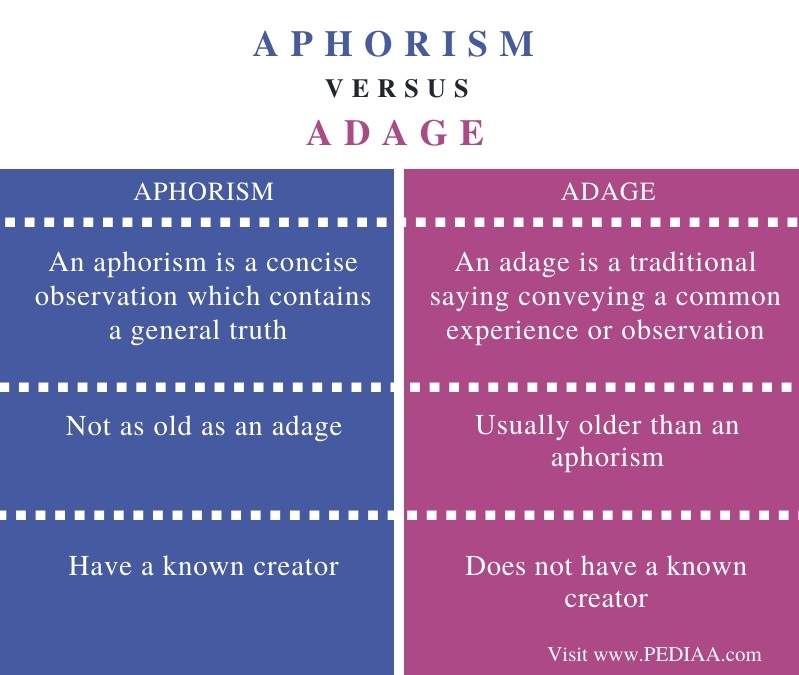 What is an Aphorism?

An aphorism is a concise and memorable expression that contains a general truth. Since they contain a truth, they are universally accepted. We even use them in our daily speech. Aphorisms can be humorous and witty, but most of all, they are memorable and give us moral instruction. Furthermore, aphorisms tend to be more direct than adages and proverbs. Let’s now quickly look at some examples:

“Laugh, and the world laughs with you; weep, and you weep alone.” – Ella Wheeler Wilcox

“A life spent making mistakes is not only more honorable but more useful than a life spent doing nothing.” – George Bernard Shaw

“The man who removes a mountain begins by carrying away small stones.” – William Faulkner

Moreover, the word aphorism comes from the Greek word aphorismos which means “definition.” In fact, the term aphorism was coined by Hippocrates, who wrote a book called Aphorisms, which contained concise statements of medical truths. Later, the definition of aphorism expanded to include truths about other fields as well. Furthermore, a person who creates or repeats aphorisms is known as an aphorist.

What is an Adage?

An adage is basically a traditional saying expressing a common experience or observation. Moreover, an adage has a long history, and it is often passed down through generations. Since it’s an old saying, it is generally accepted to be true. Thus, an adage gains credibility through its long existence. Furthermore, the term adage comes from the Latin adagium, meaning ‘saying.’

Some common adages include;

A penny saved is a penny earned.

Nothing ventured; nothing gained.

Eat to live and not live to eat.

You live, you learn.

Although most adages embody common observations, some can be metaphoric and have hidden meanings. Furthermore, adages are quite similar to proverbs.

Similarities Between Aphorism and Adage

Difference Between Aphorism and Adage

An aphorism is a concise observation which contains a general truth whereas an adage is a traditional saying conveying a common experience or observation.

An adage is usually older than an aphorism. Moreover, adages are usually passed from generation to generation.

Most aphorisms have a known creator, whereas most adages do not have creators.

An aphorism is a concise observation which contains a general truth whereas an adage is a traditional saying that expresses a common experience or observation. The main difference between aphorism and adage is that an adage generally has a longer history than an aphorism.