The main difference between Class and Object is that a class is a blueprint or a template to create objects while an object is an instance of a class.

A programming paradigm denotes the style of organizing the structure and the elements of a computer program. One major paradigm is Object Oriented Programming (OOP). It allows the developers to model real-world scenarios easily. Furthermore, this paradigm allows creating software using objects. Class and object are two concepts related to OOP. 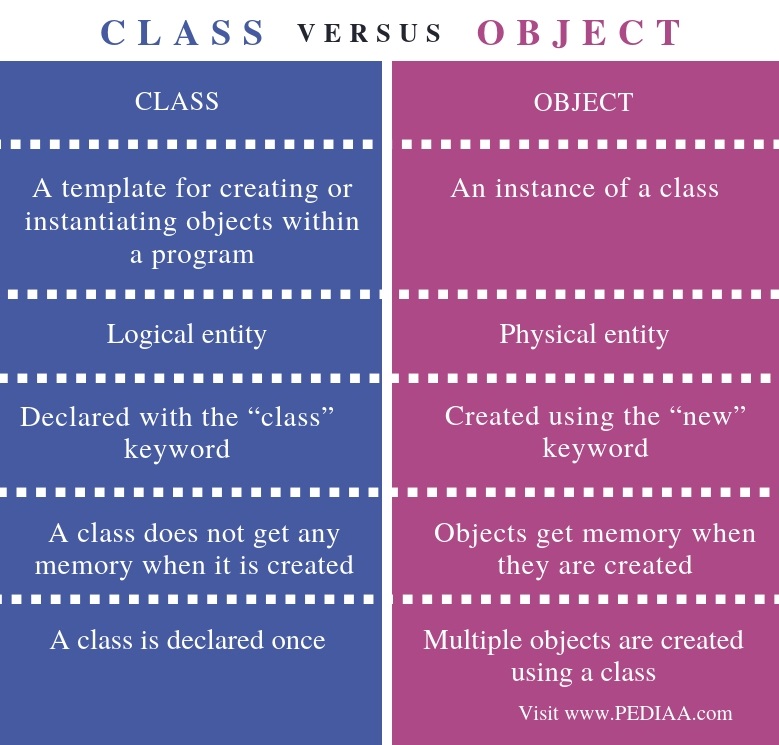 A class is a blueprint to create an object. It is a logical entity that provides the structure to create objects. In other words, the programmer can create multiple objects using one class. A class consists of attributes and methods. The attributes are the fields or methods. Methods describe the behaviors. Furthermore, a class can also contain a constructor. It is a special method that is used to initialize an object.

Likewise, using this class – object scenario, it is possible to model any real-world situation easily.

In the above program, there is a class called Student. It has private properties called id, name, and gpa. The Student constructor helps to give initial values to these properties. There is a method called displayDetails to display the properties. In the main program, the student objects (s1, s2) are created.  The new keyword helps to allocate memory for the objects at runtime.  Then the dispalyDetails method is called using those objects. Therefore, the student details display on the console.

Difference Between Class and Object

A class is a template for creating or instantiating objects within a program while an object is an instance of a class. Thus, this is the main difference between Class and Object.

Also, an important difference between Class and Object is that Class is a logical entity while Object is a physical entity.

Moreover, Class is declared with the “class” keyword whereas an object is created using the “new” keyword.

A class does not get any memory when it is created whereas objects get memory when they are created. Hence, this is another difference between Class and Object.

Furthermore, a class is declared once while multiple objects are created using a class.

Entire OOP is based on the concept of class and object. The main difference between Class and Object is that Class is a blueprint or a template to create objects while an object is an instance of a class. In brief, there should be a class to create objects.