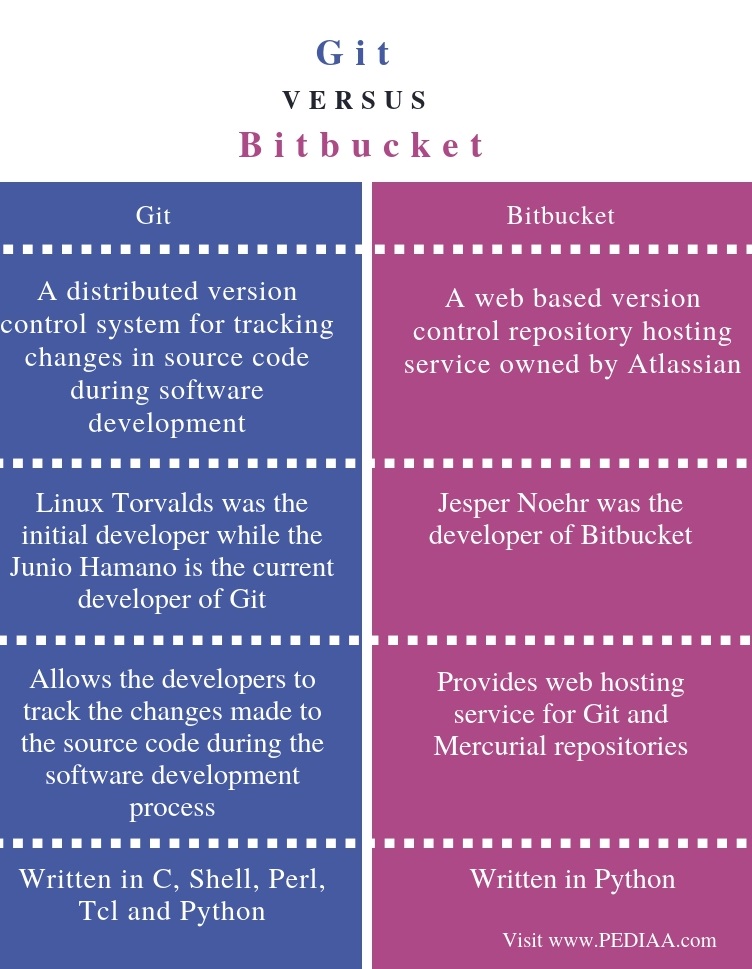 Git provides multiple advantages. It gives strong branching and merging capabilities. The users can have multiple local branches that are entirely independent of each other. Moreover, the user can create; delete the branches within a small amount of time. When finding bugs, the developer can make a branch, do the modification and then delete the branch.

The centralized system requires to communicate with the server constantly. However, Git is a distributed system. Therefore, all operations are performed locally. It makes Git works fast. Furthermore, Git also provides a feature called “staging area” or “index”. It is an intermediate area. The developer can format and review the commit before completing the commit operation.

Bitbucket is a web-based version control repository hosting service. It is similar to other web hosting services for version controlling such as GitHub. Atlassian Company owns BitBucket. It is suitable for software projects that use Mercurial or Git. Bitbucket offers both commercial plans and free accounts. It is also possible to integrate Bitbucket with other Atlassian software such as Jira, Confluence, and Bamboo.

In addition to the Data Center, Bitbucket provides two deployment models. They are called Bitbucket Cloud and Bitbucket Server. Bitbucket Cloud is written in Python and Django web framework. Moreover,  Bitbucket server is a combination of Git Server and web interface product written in Java and built with Apache Maven.

Difference Between Git and BitBucket

Git is a distributed version control system for tracking changes in source code during software development. In contrast, Bitbucket is a web-based version control repository hosting service owned by Atlassian. Thus, this describes the main difference between Git and Bitbucket.

Linux Torvalds was the initial developer while the Junio Hamano is the current developer of Git. Jesper Noehr was the developer of Bitbucket.

Based on functionality, the difference between Git and Bitbucket is that the Git allows the developers to track the changes made to the source code during the software development process. But, Bitbucket provides web hosting service for Git and Mercurial repositories.

GIT was written in C, Shell, Perl, Tcl and Python, whereas Bitbucket is written in Python. Hence, this is another difference between Git and Bitbucket.