The main difference between gracile and robust is that gracile species had smaller cheek teeth, pronounced prognathism, less flared cheeks, and no sagittal crest, but robust species had enormous cheek teeth, robust jaws and massive jaw muscles, sometimes anchored to a bony crest running along the top of the skull. Furthermore, gracile species were frugivores that lacked heavy vegetation, but robust species were herbivores that consumed heavy, gritty vegetation.

Generally, gracile and robust are two terms commonly used to describe different species of the extinct genus Australopithecus. Also, they belong to the tribe Hominini and apparently evolved in eastern Africa around 4.2 million years ago. 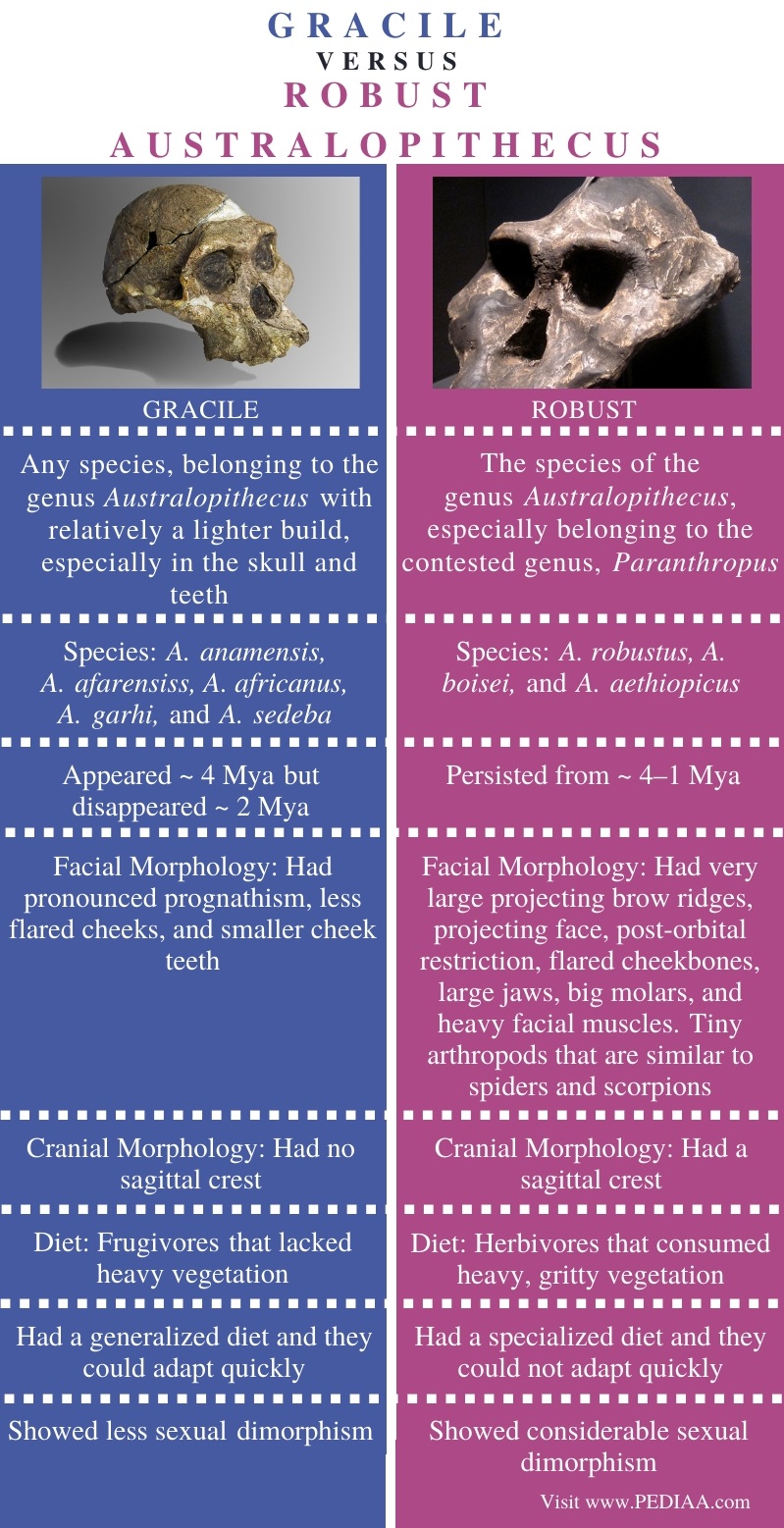 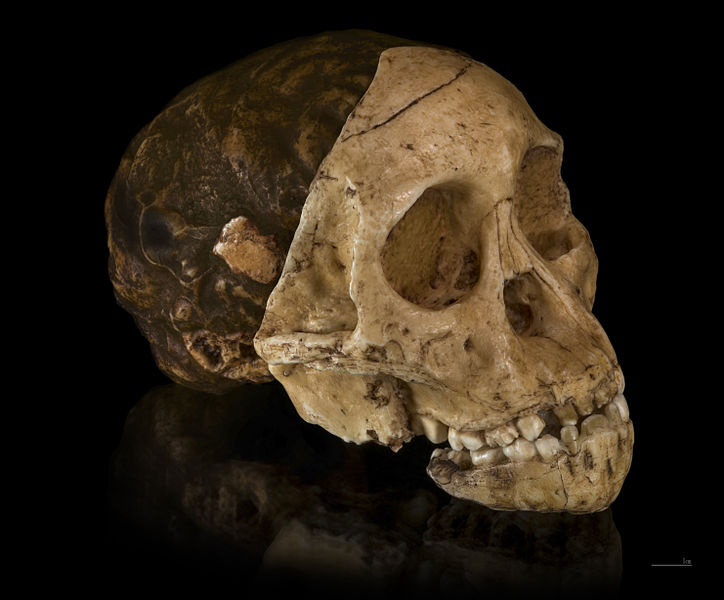 Importantly, the main significant feature of these gracile species is their generalism rather than specialization in hard-to-process herbivorous food. That means; they are frugivores adapted to a fruit-based diet. On that account, they had a lighter appearance in their facial and cranial features. Thereby, they lacked bony crests for the attachment of heavy chewing muscles. Still, they had smaller cheek teeth. Also, their anterior dentition was emphasized. But, they had a pronounced prognathism, which is the bulging out of the lower jaw or mandible.

The term ‘gracile’ is used to describe anatomically modern humans (AMH) and Epipaleolithic humans that are Combe-Cepelle, a Paleolithic and Epipaleolithic site situated in the Couze valley in the Périgord region of southern France. Here, anatomically modern humans refer to H. sapiens having an anatomy consistent with the range of phenotypes seen in contemporary humans from varieties of extinct archaic humans. However, Epipaleolithic humans lived in a period intervening between the Upper Paleolithic and Neolithic in the Stone Age. The Epipalaeolithic hunter-gatherers are nomadic, made relatively advanced tools from small flint or obsidian blades, known as microliths, that were hafted in wooden implements.

The robust form is the other group of species of the genus Australopithecus with opposite features to the gracile counterpart. In general, Paranthropus is another term for the robust Australopithecines. In this, there are three significant species that represent the robust form. They are A. robustus (2.5 Mya), A. boisei ( 2.5-1.4 Mya), and A. aethiopicus (2.5 Mya). Also, these species were sympatric with the gracile forms and later with early Homo throughout their existence. 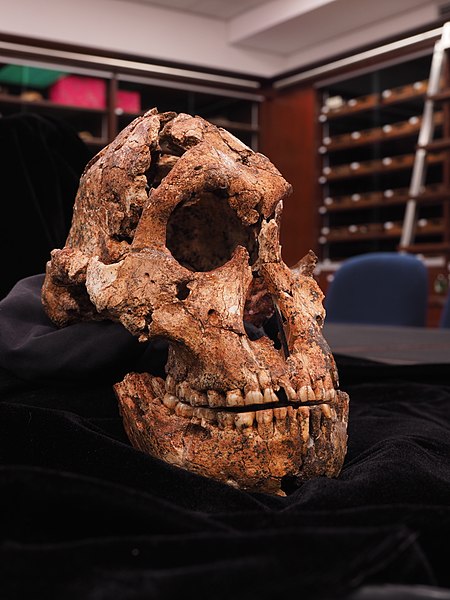 Figure 3: DNH 7, The Most Complete Skull of A. robustus

In contrast to the gracile forms, robust forms adapted to consume heavy and gritty vegetation as they are herbivores. Therefore, their diet was specialized. On that account, they had large cheek teeth, robust mandible as well as a heavy bony architecture (i.e. zygomatic arch), which supports strong chewing muscles. Additionally, they had very large projecting brow ridges and projecting face 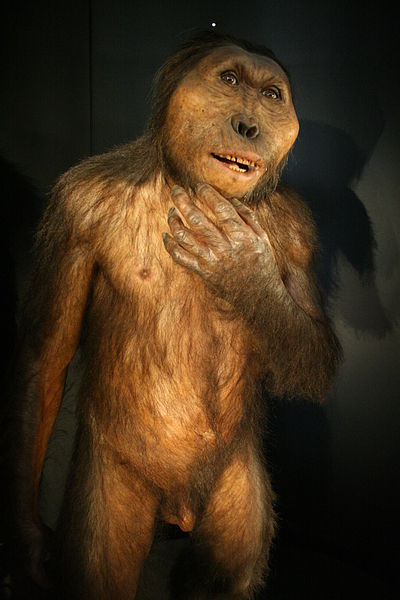 Similarities Between Gracile and Robust

Difference Between Gracile and Robust

In brief, gracile forms refer to the species of the genus Australopithecus, excluding Paranthropus. Therefore, the main characteristic facial features of these species include smaller cheek teeth, pronounced prognathism, and less flared cheeks. Also, they had no sagittal crest. On that account, gracile species were frugivores that had a fruit-based diet. In contrast, robust species of the same genus are also known as Paranthropus. Basically, they had enormous cheek teeth, robust jaws, and massive jaw muscles. However, they had a sagittal crest. Hence, robust species were herbivores that consumed a heavy and gritty diet. Therefore, the main difference between gracile and robust is the facial and cranial features, which led to their type of diet in Australopithecus.