Hominid and hominin are two names used in the scientific classification of apes including humans. In older classifications, all apes such as chimpanzees, gorillas, orangutans, and humans were classified into three families since scientist identified humans as distinct animals from the other apes. Therefore, Hominidae or hominids is the family which included humans in the older classification. Over time, with the help of improved techniques, scientists started placing humans and their great apes together into the family hominid. Then, they divided orangutans into a separate subfamily. All the remaining great apes were placed in another subfamily. In the next level, chimpanzees, gorillas, and humans were divided into three separate taxonomic levels. Here, humans belong to the Hominini or hominins. The main difference between hominid and hominin is that hominid is the family to which humans belong whereas hominin is the tribe level to which humans belong to. The tribe level occurs between the subfamily and genus. 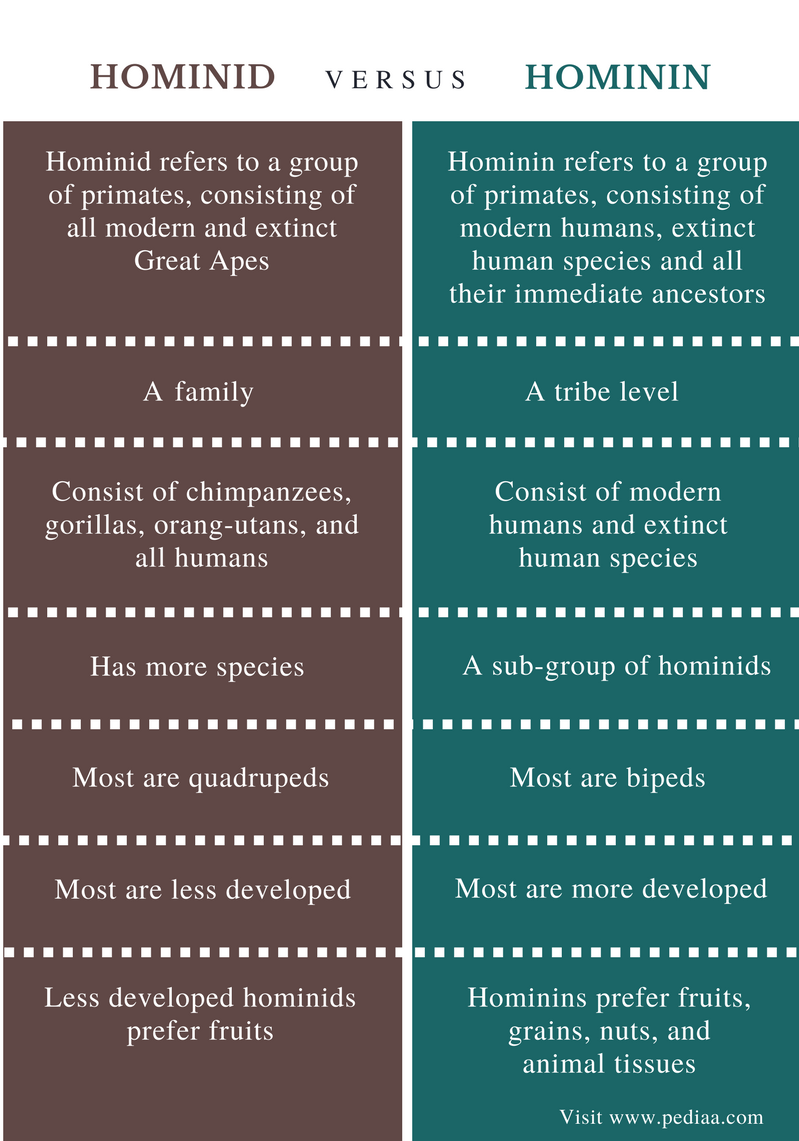 Hominid refers to a group of primates, consisting of all modern and extinct Great apes. This includes modern humans, chimpanzees, gorillas, and orangutans plus all their immediate ancestors. Hominidae is the name of the family wherein hominid is the common name of this primate group. Together with gibbons, hominids belong to the superfamily Hominoidea. Humans and their extinct species belong to the tribe Hominidae. Other great apes were placed in the family Pongidae in the older classification. But later, morphological and molecular studies showed that humans are more related to chimpanzees. However, gorillas and orangutans are more distinct. Therefore, orangutans are placed in a different subfamily Ponginae. Gorilla, humans, and their extinct species are placed in the subfamily Homininae. But, later classifications place humans and their extinct species in the tribe Hominini. The classification of Hominoidae is shown in figure 1.

Panini is a proposed tribe in which chimpanzees and bonobos are going to be placed. However, since they are genetically more distinct from gorillas, they can be also placed in the same tribe with humans as well. The ancestors of chimpanzees and humans separated about 5 million years ago.

Hominin refers to a group of primates, consisting of modern humans, extinct human species, and all their immediate ancestors. This includes Neanderthals, Homo erectus, and the species of Australopithecus.  All hominins are placed in the tribe Hominini. Hominins show complex cognitive attributes such as recognizing themselves in mirrors. The other characteristic features of hominins are reduced canine size, increasing brain size, and bipedalism. Different hominids are shown in figure 2. 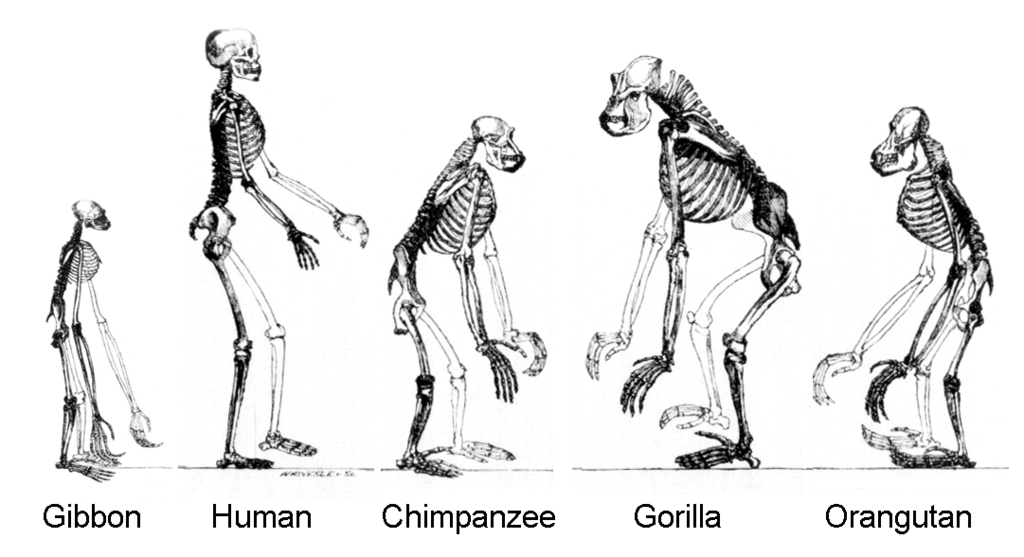 Modern human (Homo sapiens sapiens) is the only surviving hominins up to date. Fossils of extinct human species were found in Africa, Europe, and Asia.

Similarities Between Hominid and Hominin

Difference Between Hominid and Hominin

Hominid: Hominid refers to a group of primates, consisting of all modern and extinct Great Apes (that is, modern humans, chimpanzees, gorillas, and orang-utans plus all their immediate ancestors).

Hominin: Hominin refers to a group of primates, consisting of modern humans, extinct human species and all their immediate ancestors (including members of the genera Homo, Australopithecus, Paranthropus, and Ardipithecus).

Hominid: Hominidae is a family.

Hominin: Hominini is a tribe level between subfamily and genus.

Hominid: Hominids consist of chimpanzees, gorillas, orang-utans, and all humans.

Hominin: Hominini is a sub-group of hominids.

Hominid: Most hominids are quadrupeds.

Hominin: Most hominins are bipeds.

Hominid: Most hominids are less developed.

Hominin: Most hominins are more developed than hominids.

Hominid and hominin are two groups of primates. Hominidae is a family, consisting of chimpanzees, gorillas, orangutans, and all humans. They are commonly called hominids. Hominini is a tribe, consisting of modern humans and their extinct species. Therefore, hominins are a subgroup of hominids. The main difference between hominid and hominin is the type of animals that belong to each taxonomic group.