Maxam Gilbert and Sanger sequencing are the two conventional DNA sequencing methods developed in the mid-1970s. Generally, they are responsible for determining nucleotide bases in a molecule of DNA. 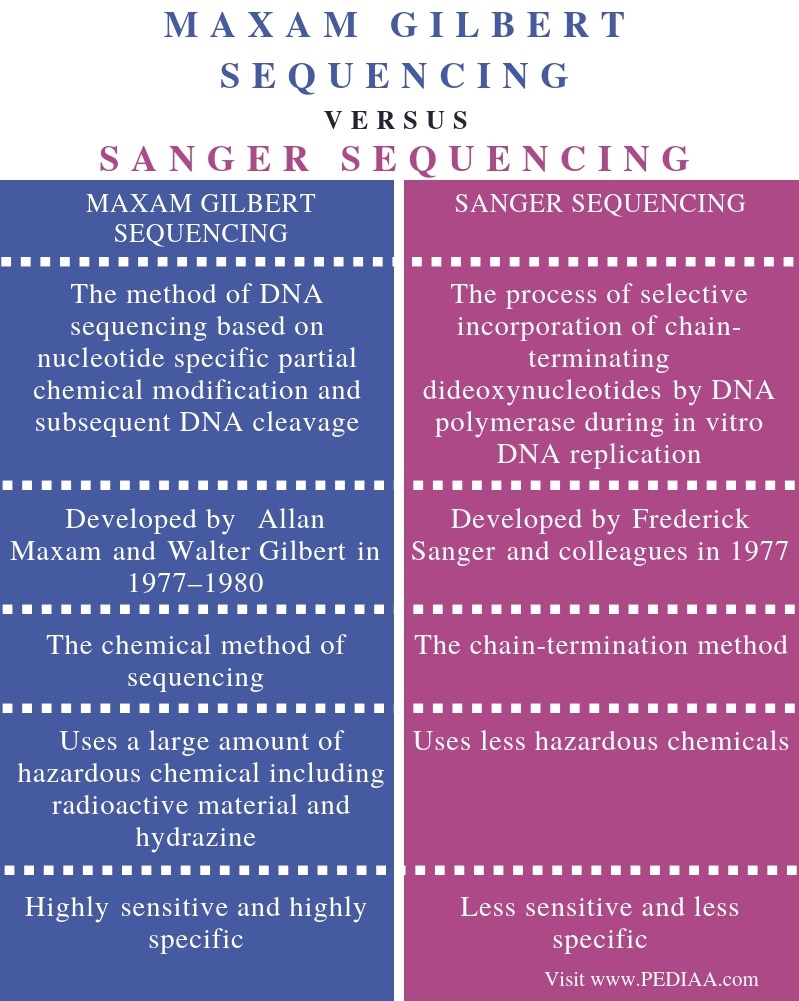 What is Maxam Gilbert Sequencing

Maxam Gilbert sequencing is one of the two conventional DNA sequencing methods developed by  Allan Maxam and Walter Gilbert in 1977–1980. Also, it is known as the chemical method of DNA sequencing.

Basically, this method involves the terminal labeling of DNA molecules with chemical agents followed by the modification of bases of DNA in four different chemical reactions. Subsequently, DNA is cleaved in the point of attachment of modified A+ G,  G, C + T, and C bases. Following, radioactive fragments are synthesized extending from the labeled end to the position of the nucleotide base. In the end, the PAGE separates the point of breaking, producing four different cleavage patterns for each of the four bases of DNA.

The steps of Maxam Gilbert Sequencing are:

Basically, the two main important features of the Maxam Gilbert sequencing is that it is both sensitive and specific. Therefore, it can provide a good distinction between bases. Still, it takes a few days to analyze a sequence with 200-300 bases. On the other hand, it uses both radioactive elements and hydrazine, which is a neurotoxin.

What is Sanger Sequencing

Sanger sequencing is the second conventional DNA sequencing method developed by Frederick Sanger and colleagues in 1977. Significantly, it was commercialized by Applied Biosystems.

Generally, Sanger sequencing is also known as the chain termination method based on the incorporation of chain-terminating dideoxynucleotides (ddNTPs) through in vitro DNA replication by DNA polymerase. Significantly, ddNTPs lack a 3′-OH group responsible for the formation of a phosphodiester bond with the incoming nucleotide, causing DNA polymerase to cease extension of DNA with the incorporation of the modified ddNTP. Also, these ddNTPs are labeled either radioactively or fluorescently, allowing the detection of the base.

The steps of Sanger sequencing are:

Maxam Gilbert sequencing is one of the two conventional DNA sequencing methods. Generally, it uses various chemicals for the specific modification of nucleotide bases on the DNA strand. Ultimately, the cleavage of DNA at the modified sites allows the determination of bases. Significantly, this method is more sensitive and specific. However, it uses hazardous chemicals. In contrast, Sanger sequencing is the second conventional DNA sequencing method, which is widely using. Usually, it uses labeled ddNTPs to terminate the chain growth during DNA replication at each of the four nucleotides. Finally, the separation of the terminated amplicons on a gel allows the determination of the DNA sequence. However, this method is less specific and less sensitive with respect to the first method. Still, it uses less hazardous chemicals. Therefore, the main difference between Maxam Gilbert and Sanger sequencing is the method and importance.