The main difference between sea slug and sea cucumber is that sea slug is a type of gastropod that belongs to the phylum Mollusca. But, sea cucumber belongs to the class Holothuroidea under the phylum Echinodermata. Therefore, sea slug is closely related to shelled animals, such as clams and oysters, while sea cucumber is closely related to spiny animals, such as sea stars and sea urchins. Furthermore, sea slug has a defined head, tentacles, and sometimes, exposed gills at the back, while sea cucumber does not have a defined head but, have tentacles coming out from one end of the body.

Sea slug and sea cucumber are two forms of marine invertebrates with soft and elongated bodies. Generally, they have different sizes, shapes, and colors. Also, they may live in the seafloor, and dwell on reefs.

Sea slug is the common name for the marine invertebrates, resembling terrestrial slugs. Also, the other names for sea slug are nudibranch and ocean’s butterfly. Mostly, they live in shallow water reefs. In fact, they are sea snails that are marine gastropods belonging to the phylum Mollusca. However, their shell has been reduced through evolution, only having a small or internal shell. In addition to that, they are non-segmented animals with bilateral symmetry. And, their organs occur inside the coelom, sensory organs in the head and the muscular foot in the ventral part involves the locomotion. Besides, they have soft skin, which is significantly brightly-colored. Their eyes are mostly primitive and can only detect the light and the dark. Furthermore, they breathe either through the skin or secondary gills called naked gills located at the back. 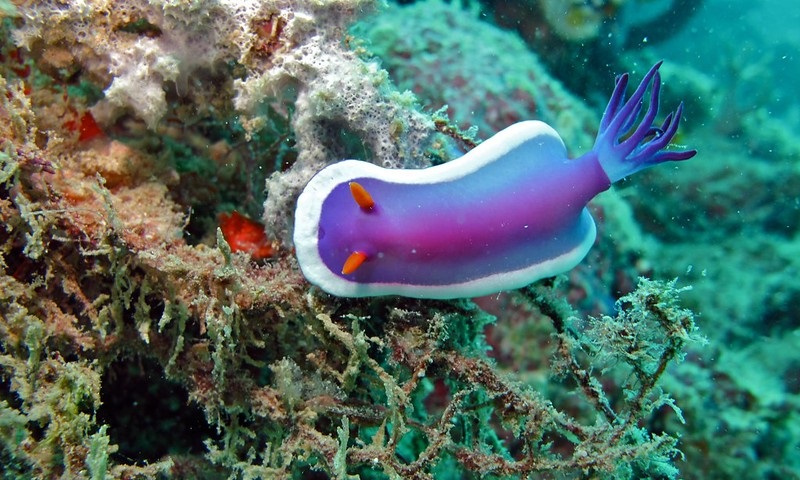 Moreover, the head of the sea slug is prominent with brightly-coloured, horn-like sensory organs called rhinophores. They communicate through chemical signals to which these rhinophores are sensitive. Furthermore, they have tentacles around the mouth and feed on seaweeds, sea lettuces, fish, starfish, crabs, seahorse, etc. Typically, sea slug is a hermaphrodite and partners exchange and store sperms until eggs mature. Seldomly, sea slug lives for more than a year. Chromodoris Annae, Dendronotus Frondosus, and Acanthodoris Pilosa are common examples of sea slug.

Sea cucumber is a soft-bodied invertebrate, mainly, inhabiting shallow waters and there are others that live in the depths of the ocean near the bottom of the ocean or partially buried. Basically, they belong to the class Holothuroidea under the phylum Echinodermata. The main types of sea cucumbers include chocolate-chip sea cucumber, Apostichopus japonicus, Holothuria scabra, black sea cucumber, etc.

Concerning the feature, in comparison to sea slug, the sea cucumber is less elongated. In addition to that, one of the main significant features of sea cucumber is a leather-like texture with a gelatinous appearance Unlike the many coloration in sea slugs, the colors of sea cucumber only appears in brown, black or olive green. Besides, the endoskeleton of the sea cucumber occurs just below the skin with calcified structures that are microscopic ossicles (or scleritis). Additionally, they have five ambulacra separated by five ambulacral grooves in which four rows of tubular legs occur. Here, the two dorsal ambulacra form the bivium, while the three ventral ones are known as the trivium. 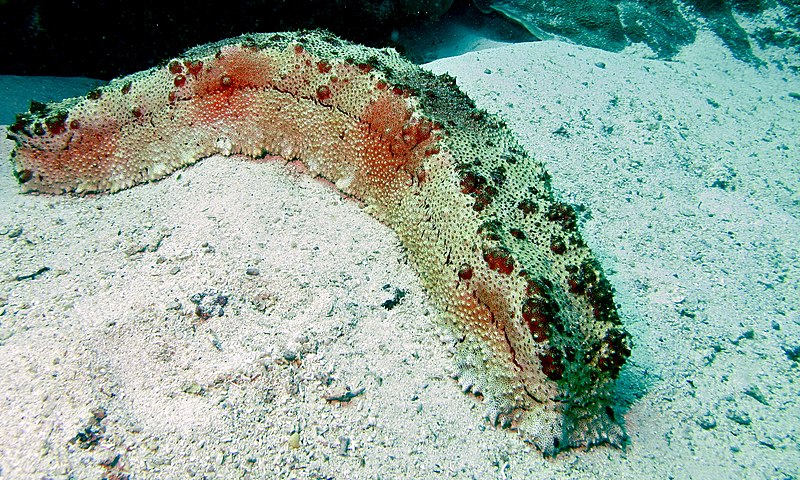 Moreover, sea cucumber does not have a defined head, and it lacks a brain. Also, they have only a ring of neuronal tissue, which sends the nerves to the tentacles, as well as to the pharynx. And, they breathe through respiratory trees with very branched, paired tubes attached to the intestine, forming a cloacal type breathing. Their circulatory system has changed to a vascular system filled with water, exerting hydraulic pressure on the tentacles and feet allowing them to move. Additionally, sea cucumber has a single, branched gonad. Usually, it feeds on detritus, algae or in some cases also plankton or waste materials.

Sea slug refers to a shell-less marine mollusk that is typically brightly colored, with external gills and a number of appendages on the upper surface. But, sea cucumber refers to an echinoderm that has a thick wormlike body with tentacles around the mouth and rows of tube feet along the body and breathe by means of a respiratory tree.

Sea slug has enormous coloration, but the coloration of the sea cucumber varies from brown, black to olive green.

Sea slug has a soft skin, but sea cucumber has a spiny skin.

Sea slug breathes either through the skin or naked gills, while sea cucumber breathes through respiratory trees.

Sea slug is a hermaphrodite, while sea cucumbers reproduce either sexually, asexually or by regeneration.

Sea slug is a soft-bodied marine invertebrate, belonging to the phylum Mollusca. Generally, it has an enormous coloration in the body. Also, it has soft skin. In addition to that, it has a defined head and naked gills. Moreover, it is a hermaphrodite. But, sea cucumber is another similar form of marine invertebrate with a spiny skin. However, it belongs to the phylum Echinodermata. Also, it does not have a defined head. Still, it has respiratory trees. Furthermore, it has a single, branched gonad for reproduction. Hence, the main difference between a sea slug and sea cucumber is their taxonomy and physical features.