Home » Language » What is the Difference Between Tools and Equipment

What is a Tool?

Any physical item that is used to achieve a goal but is not consumed during this process can be defined as a tool. Informally speaking, it can also be used to describe a specific procedure with a specific purpose as well. The use of tools by human beings dates back million years. However, humans are not the only creatures known to employ tools in their day to day life.

Tools are often also referred to as machine, apparatus, implements, instruments or utensils. The knowledge of obtaining, constructing and using tools is known as technology. Anthropologists view the usage of tools as an important step in the evolution of the mankind. It is said that after humans evolved an opposable thumb that is useful for holding tools, the intelligence of humans drastically increased as well.

Tools can perform a variety of functions such as cutting and chopping, moving, shaping, fastening, guiding, enacting chemical changes, fastening, information and data manipulation, etc. There can be specific tools designated for specific purposes whereas most tools can serve a combination of uses. 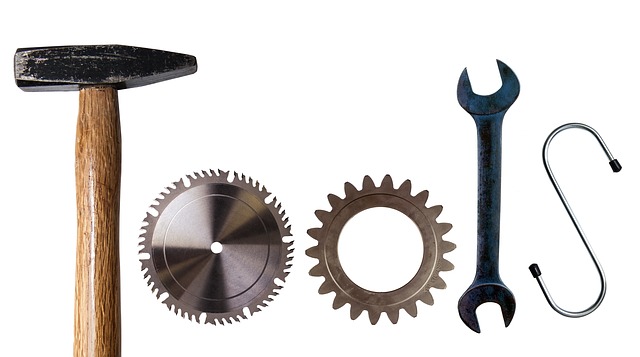 The idea of equipment represents all sorts of machinery, functional devices or accessories which serve an individual, household or a community purpose. Usually, a set of tools that are designated for a specific task is known as equipment. This could be a small set of functional items in a finished product. For example, equipment of a car may be alternators, absorbers, optical, electronic boxes,etc. Equipment of a house may be appliances while equipment may also include all sorts of devices needed for a specific task.

What is the difference between Tools and Equipment?

Tools and equipment are two words that are often used synonymously, mainly due to the similarities of their meanings. Because of this factor, they can be used interchangeably in most instances. However, in certain cases, this may not be so.

• A tool can be non-mechanical as well. However, when one says equipment, there is a certain mechanical aspect to it that cannot be ignored.

• The usage of tools among human beings runs back to millions of years. However, the use of equipment is more of a recent development.

• Tools are often seen to be used by animals as well. Equipment is only used by human beings.

• Tools are usually multipurpose. Equipment is designed for a specific task.