Home » Language » English Language » Literature » Why Do Poets use Repetition

What is Repetition in Poetry

Repetition is a rhetoric device which includes repeating a sound, word, phrase, or line. Repetition can be classified into different types. Given below are some of these classifications.

Repetition of a Word

Anaphora:  Repetition of a certain word or phrase at the beginning of several succeeding clauses or phrases.

“Five years have passed;
Five summers, with the length of
Five long winters! and again I hear these waters…”

Epiphora: Repetition of a certain word or phrase at the end of successive clauses

Polyptoton:  Repetition of the words derived from the same root.

“The Greeks are strong, and skillful to their strength, Fierce to their skill, and to their fierceness valiant;”

Anadiplosis: Repetition of the last word/phrase of one line as the first word of the next line.

“The frog was a prince

The prince was a brick

The brick was an egg

The egg was a bird.”

Repetition of a Sound

Assonance: Repetition of a vowel sound in adjacent or closely connected words

He felt desperate and restless.

All mammals named Sam are clammy.

Alliteration: Repetition of a consonant sound at the beginning of adjacent or closely connected words

But a better butter makes a batter better. 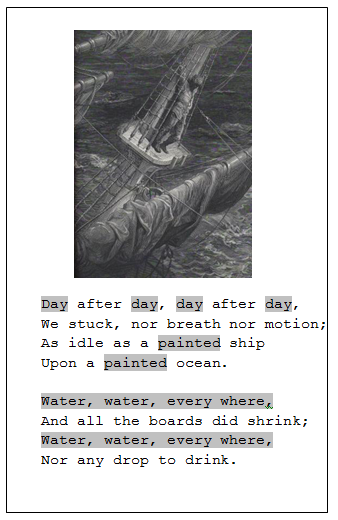 The Rime of the Ancient Mariner by Samuel Taylor Coleridge

Why Do Poets use Repetition

Different poets use repetition for different purposes. Some of these functions of repetition include adding emphasis, setting a rhyme, and making a poem memorable.

Repetition has the power to make even a simple sentence sound like a dramatic one. When a certain word or phrase is repeated throughout the poem, the reader would notice it more easily and pay more attention. For example, let’s take an excerpt from Emily Dickinson’s “I’m nobody! Who are you?”

I’m nobody! Who are you?

Are you nobody too?

Then there’s a pair of us-don’t tell!

They’d banish us you know.

The poet uses the repetition of the word ‘nobody’ to stress on the point of main significance.

Repetition can enhance the beauty and musicality of a verse as well. Some poets use repetition to set the rhythm of the poem, in the absence of rhyme. For example,

Betty Botter bought some butter, but, she said, the butter’s bitter;

If I put it in my batter it will make my batter bitter,

But a bit of better butter will make my batter better.

Repetition can add emphasis to a poem; it can also add rhythm and musicality. However, too much repetition can make also make a poem seem a poem disjointed and repetitive. Thus, you should always be careful when using repetition in a poem.