For those who wonder why is Ayers rock famous, here is the answer. Ayers Rock is a very important natural landmark in Australia. It is a rock that has earned a great name for not just itself, but for entire Australia because of its size. It is believed to be the second largest monolithic natural structure of the world after Mount Augustus. This imposing structure rises above the ground to a height of nearly 318 meters. It is so large that you have to cover a distance of nearly 10km on foot to come to the same point again. Ayers Rock was earlier known as Uluru after the native tribe that lived in the area. This gigantic rock formation is so famous that tourists come from all parts of the world to see it every year.

Why is Ayers Rock Famous – Facts

Ayers Rock, also called simply The Rock, is situated just 400km away from Alice Springs. It is a major attraction for the tourists coming to visit Kata Tjuta National Park in Northern Territories. Uluru is undoubtedly one of the most prominent landmarks of Australia. There is no geographical structure like Ayers Rock in the world. This is the reason many consider it as a natural wonder. Ayers Rock is the name given to this large monolithic structure by explorer William Gosse, who named it after Henry Ayers, Chief Secretary of South Australia. Interestingly, this world famous rock is owned and administered by aborigines even today. Earnest Giles, the famous explorer, called Ayers Rock ‘The Remarkable Pebble’ in 1872. 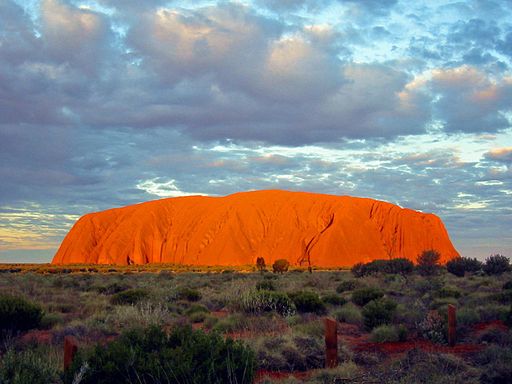 • Ayers Rock changes its colors at different times of the day to make it mesmerizing for the tourists. As it is a long distance away from Alice Springs, most tourists make it a point to stay overnight to be able to view this phenomenon during the daytime. The rock appears to be red at sunrise and sunset though the hue keeps on changing throughout the day.

• Ayers Rock is sacred to the aborigines living in the area. Though these people returned the ownership of the rock to the government in 1985, they have put up sign boards requesting tourists not to climb this structure.

• Uluru was formed approximately 600 million years ago. Scientists say that this rock initially lied at the bottom of the seas, but it rises to a height of 348m above the surface at present. Unique feature of Uluru is the fact that it extends some 2.5km below the ground.

• Despite its huge size, Uluru is not the largest monolithic natural structure of the world. Mount Augustus, lying in Western Australia, holds this record.

• Ayers Rock is nearly 3.6km long. It is 1.8km wide, making its circumference nearly 10km long. Though the rock is flat at the top, it presents a steep angle for all those who try to climb to the summit. There are many caves, water bodies, and ridges in this structure that make it all the more fascinating for the tourists.

Ayers Rock is situated in an area that is very close to the dead centre of Australia.