Sri Lanka has always been a tourist attraction sight especially due to the diversity of wildlife that can be seen in forests such as the Sinharaja, Yala, Wilpathu, Minneriya, Udawalawe, Kumana etc. Every  year a massive number of tourists both local and foreign come to the country to enjoy the views of these magnificent animals. The diversity of wildlife in Sri Lanka extends to marine animals as well making the wildlife experience both unique and exciting. In this article, let us have a look at some of the most well-known wildlife in Sri Lanka.

The Sri Lankan Elephant is one of the most treasured and magnificent creatures that the country has to offer. This elephant is a sub-species of the Asian elephant and is now considered as an endangered species. They can be seen in many national parks such as Yala, Udawalawe, Wilpattu and Minneriya national park. If you are lucky, you will even be able to spot a tusker in the national park.

In Sri Lanka, there is an elephant orphanage located in Pinnawala which conserves Sri Lankan elephants. This Pinnawala orphanage is open to tourists and they can watch baby elephants being fed, bathing of elephants, and even get an opportunity to feed them. 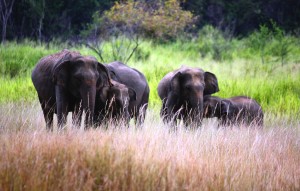 The Sri Lankan leopard is another highly endangered animal that is unique to the country. This animal is on the verge of becoming extinct mainly due to human leopard conflicts that occur in the rural setting. Also, leopards are often hunted by humans as well.

Although in the past leopards were to be seen in forests all over the country, now this is rather limited. Zoologists state that the leopards can make their habitat in both the dry zone as well as the wet zone. Tourists, however, can see leopards in the Yala National forest. 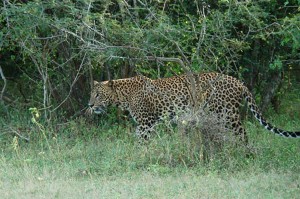 The sloth bear is another uncommon animal that you can see in Sri Lanka especially in the forests of the dry zone. In the Yala National park, there is a high probability for you to see a sloth bear. These creatures are omnivorous; hence they not only eat meat but also other vegetables and nuts as well.

The sloth bear is once again a threatened animal mainly because of its dependence on the forest for food. Zoologists state that sloth bears prefer to eat insects instead of other animals. 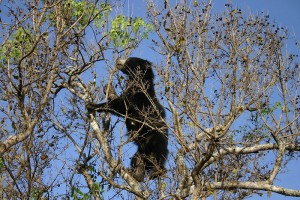 The Sri Lankan Sambar is a large deer that can be seen in Sri Lanka. This magnificent creature can easily be seen at Horton Plains located in the wet zone of the country. The Sri Lankan Sambar is believed to be one of the largest species of the deer family. If you get an opportunity to visit the Horton Plains, have a look out for large herds of Sambars roaming around the park. 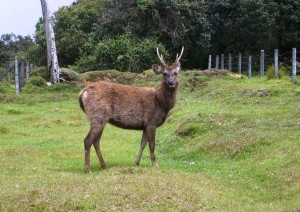 Although Sri Lankan tourism was rather limited to the forests located in the wet and dry zones now it encapsulates the marine animals as well. This is now becoming a booming tourist attraction as a number of whales and dolphins can be spotted quite easily.

Dondra point located in the Southern part of the country is one of the greatest spots to go for whale watching. You can spot the Blue whale, sperm whale, and Spinner dolphins as well. 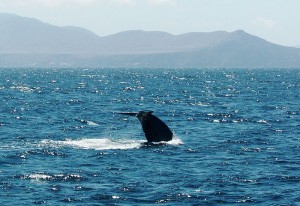 3. “SlothBearTree” by Bodhitha at the English language Wikipedia. [CC BY-SA 3.0] via Commons