Betadine is a commonly used medicine to treat minor wounds. It is an antiseptic, which can prevent the microbial growth on a surface, especially disease-causing microorganisms. Betadine is used as a disinfectant as well. Iodine is a chemical element that belongs to the halogen group. It is the heaviest among other halogens. Iodine is the only halogen that exists in a solid phase at room temperature. Iodine is also used as a disinfectant and to treat iodine deficiency. The main difference between Betadine and Iodine is that Betadine is a formulation containing povidone, HI (hydrogen iodide) along with elemental iodine (I) whereas iodine is a chemical element. 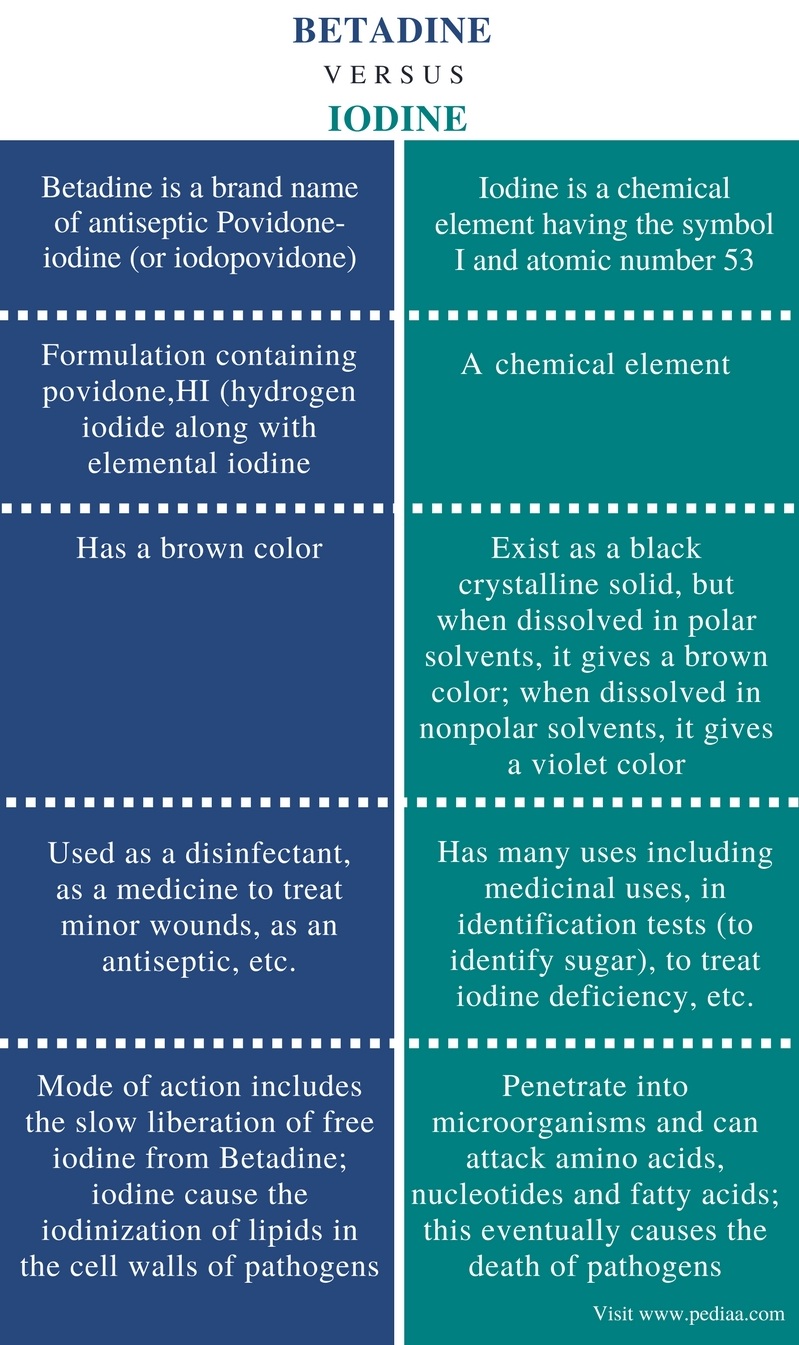 Betadine is a brand name used to name the antiseptic Povidone-iodine (oriodopovidone). It is used for skin disinfection before and after a surgery and is used to treat minor wounds. This product is available as a liquid solution, a powder or as a cream. 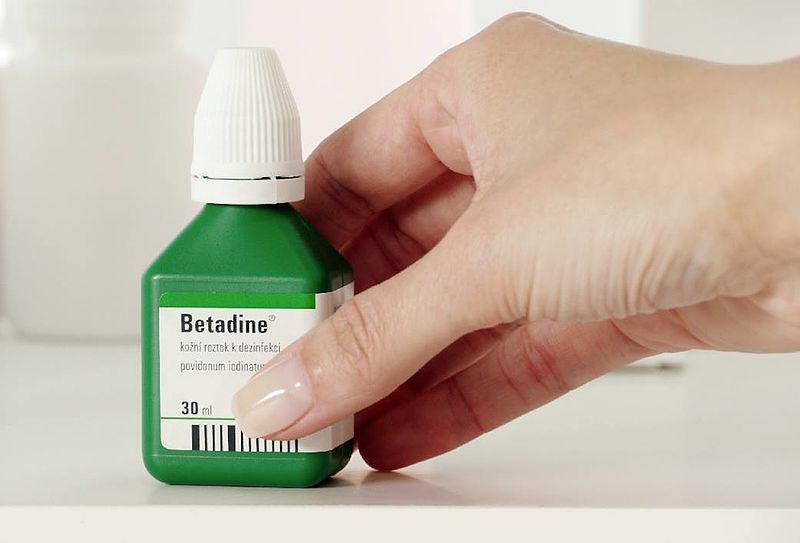 Betadine is a complex chemical compound that consists of povidone, HI (hydrogen iodide) along with elemental iodine(I). Betadine is completely soluble in water, even in cold or mildly warm water. The bactericidal effect of Betadine arises from the slow liberation of free iodine from Betadine; iodine causes the iodinization of lipids in the cell walls of pathogens. Since this iodine release is a very slow process, it cannot harm our skin cells.

The efficiency of Betadine is determined mainly based on the composition. Betadine reduces the transmission of infection by neutralizing it. The bactericidal activity is immediate, and a lasting effect against all pathogens can be observed from Betadine. As the pH of this solution is equal to the neutral pH of the skin, Betadine solution does not cause skin irritation.

But taking higher doses can cause skin irritations, kidney problems, metabolic acidosis, etc. Signs of allergic reactions such as rashes, itching, peeling skin are some other side effects of Betadine. However, it is found that bacteria do not develop any tolerance towards Betadine.

Iodine is a chemical element having the symbol I and atomic number 53. It is a group 17 element and belongs to the group of halogens. It is the heaviest halogen. It is a nonmetal. At room temperature, iodine is a solid. The melting point of this iodine solid is 113.7oC, and the boiling point is 184.3oC. 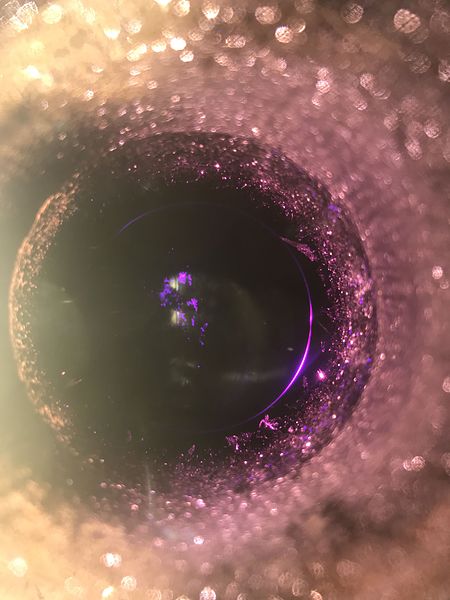 Iodine has the highest melting and boiling points among other halogens. This is mainly because iodine atoms have the largest electron cloud among halogens, resulting in strongest Van der Waal forces. Since iodine crystals are very stable at room temperature, it is the least volatile halogen.

Iodine has many medicinal applications. Elemental iodine is used as a disinfectant (It is used to treat skin disease caused by some fungal species). It is also used to treat iodine deficiency. Iodine shows quick antimicrobial activity. Iodine works even at low concentrations; thus, the efficiency is relatively high. It can penetrate into microorganisms and can attack amino acids, nucleotides and fatty acids. This eventually causes the death of pathogens.

Difference Between Betadine and Iodine

Betadine: Betadine is a brand name of antiseptic Povidone-iodine (or iodopovidone).

Iodine: Iodine is a chemical element having the symbol I and atomic number 53.

Betadine: Betadine is a formulation containing povidone, HI (hydrogen iodide) along with elemental iodine (I).

Iodine: Iodine is a chemical element.

Betadine: Betadine has a brown color.

Betadine: Betadine is used as a disinfectant, as a medicine to treat minor wounds, as an antiseptic, etc.

Iodine: Iodine has many uses including medicinal uses (used as a disinfectant), in identification tests (to identify sugar), to treat iodine deficiency, etc.

Betadine: Mode of action includes the slow liberation of free iodine from Betadine; iodine cause the iodinization of lipids in the cell walls of pathogens.

Iodine: Iodine can penetrate into microorganisms and can attack amino acids, nucleotides and fatty acids. This eventually causes the death of pathogens.