Cell migration and invasion are two types of processes undergone by cells in multicellular organisms. However, both processes are also important in disease conditions as well. 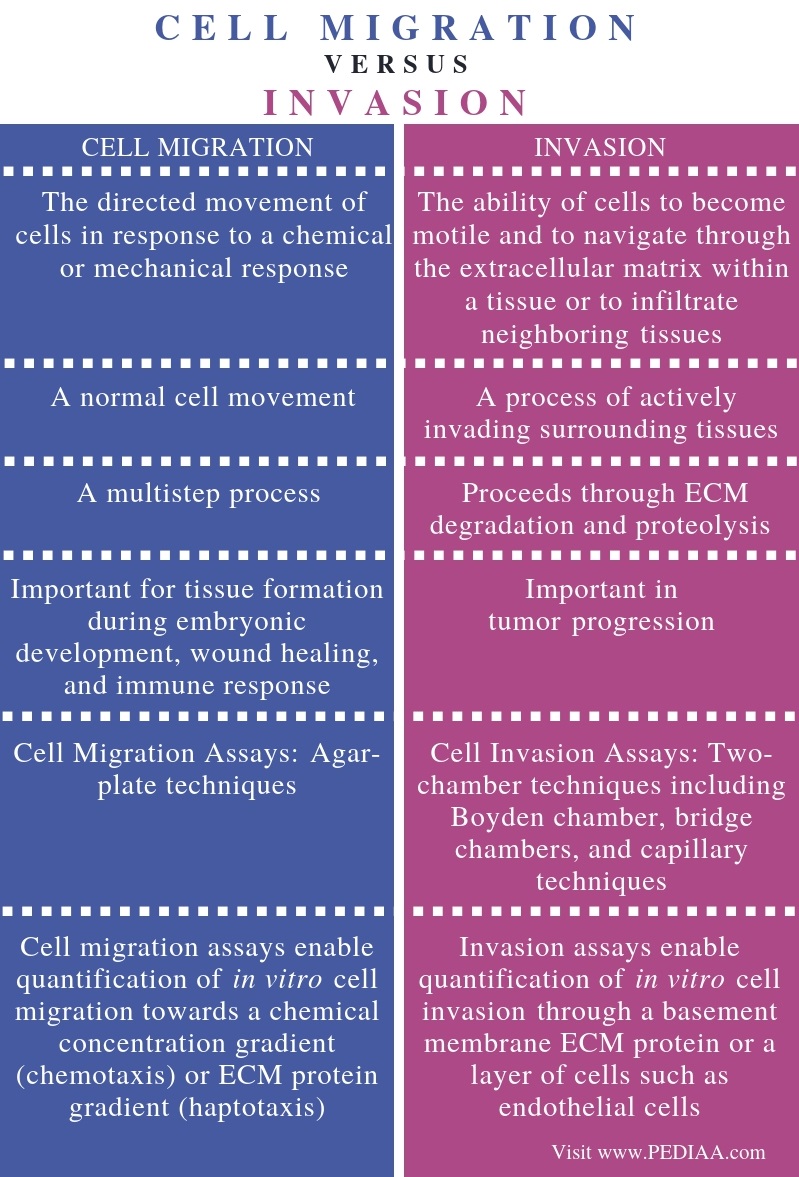 What is Cell Migration

Cell migration is the regular movement of cells in multicellular organisms. It is a major process in the development and maintenance of the body of multicellular organisms. Moreover, the migration of cells is a directional process, which occurs in response to either a chemical or mechanical stimulus. Generally, it is important for tissue formation during embryonic development. Therefore, it is responsible for the various morphogenetic events in the developing embryo. For example, during gastrulation, the three germ layers form as a result of a series of cell migration steps that occur in the inner cell mass. Consequently, the cells in these germ layers further migrate into their target locations in order to undergo specialization, forming tissues and organs. 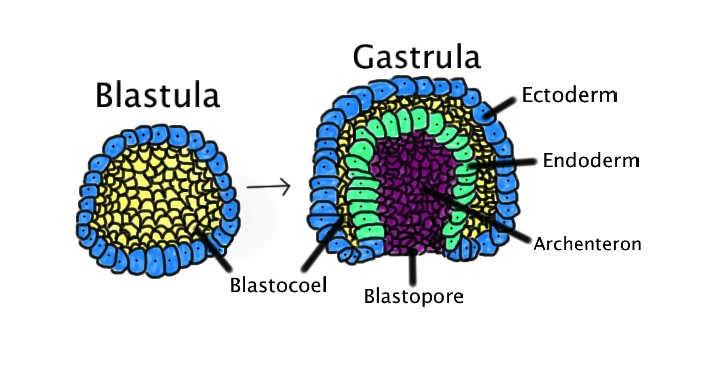 Furthermore, cell migration plays a key function in the renewal and repair of tissues in adults. Here, cells from the underlying tissue layers migrate to tissues with old or damaged cells in order to replace them. Therefore, migration of cells is critical in maintaining tissue integrity while allowing wound healing. On the other hand, different cells in the immune system, including phagocytes, macrophages, and neutrophils, migrate from the bloodstream to the infected tissues in order to trigger an immune response. However, undesirable cell migration can cause various pathological conditions, including tumor formation, vascular disease, inflammatory diseases, etc.

Invasion is an active process of direct extension and penetration of cells into neighboring tissues through the extracellular matrix. Generally, the penetration of cells in a tumor is the key process responsible for cancer invasion into neighboring tissues. Moreover, various factors such as the extracellular matrix, junction proteins, cytokines, the expression of proteases as well as the alteration of cellular dynamics facilitate tumor cell invasion. Thus, the two major events of cell invasion include the degradation of the extracellular matrix and proteolysis. Metastasis is another stage of cancer development, spreading the cells in a tumor either through the circulatory or lymphatic system. 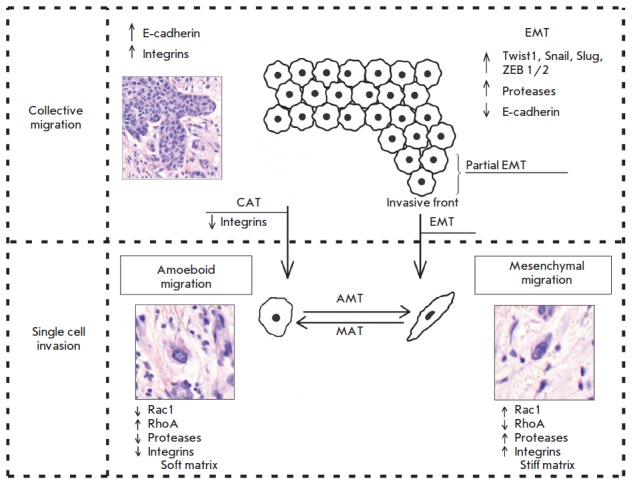 Due to this specific requirement of invasion to penetrate extracellular matrix, cell invasion assays have to perform in a special way, in addition to assays for cell migration. Generally, in cell migration assays, a semi-solid matrix of either gelatin or agar serves as the medium for the migration of cells. In contrast, in invasion assays, a filter with molecules resembling the molecules in the extracellular matrix is used to separate the chambers on the way of cell movement.

Similarities Between Cell Migration and Invasion

Difference Between Cell Migration and Invasion

Cell migration refers to the directed movement of cells in response to a chemical or mechanical response while invasion refers to the ability of cells to become motile and to navigate through the extracellular matrix within a tissue or to infiltrate neighboring tissues.

Moreover, cell migration is a multi-step process while invasion proceeds through ECM degradation and proteolysis.

Cell migration is the normal movement of cells in multicellular organisms. It is important for tissue formation during embryonic development, wound healing, and immune response. However, an invasion is an active process of cell movement, occurring through the extra-cellular matrix. Therefore, ECM degradation and proteolysis are two key processes of cell invasion. Furthermore, invasion is an important process of tumor progression into metastasis. However, the main difference between cell migration and invasion is the type of cell movement and their importance.