Corrosion and rusting are two different terms expressing the same idea. Corrosion is a type of oxidation. Rusting is a type of corrosion. Corrosion can occur on metal surfaces as well as on nonmetal surfaces. Corrosion can be caused by either the exposure to air and moisture or the spread of chemicals on the surface. Rusting is the chemical process of forming a red-orange coating on the surface of iron or steel. It is an oxidation. The main difference between corrosion and rusting is that corrosion can happen due to chemicals whereas rusting does not happen due to chemicals although it can be accelerated by some chemicals. 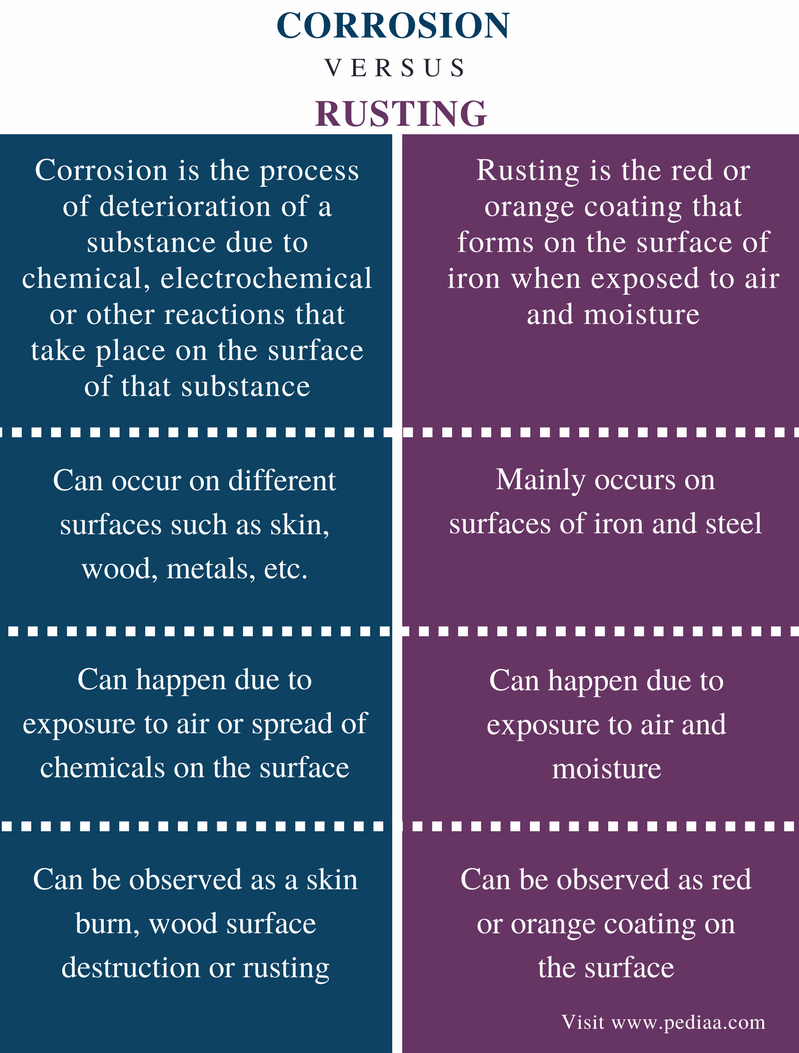 Corrosion is the process of deterioration of a substance due to chemical, electrochemical or other reactions that take place on the surface of that substance. Corrosion can occur on both metal and nonmetal surfaces. The corrosion of a material affects the structure of the material surface. The most common example for corrosion is rusting. Here, the color and the quality of the steel is changed.

Corrosion can also take place on nonmetal surfaces such as table tops and skin. When some corrosive chemicals are dropped on these surfaces, deterioration of that surface may occur. Such chemicals include strong acids and strong bases; for examples, acids like HCl, H2SO4, and bases like NaOH, KOH, etc. Chemicals that cause corrosion are known as corrosive chemicals. These chemicals can cause visible destruction of surfaces that are permanent damages. The surface can be skin, eye, wood, metals, etc. 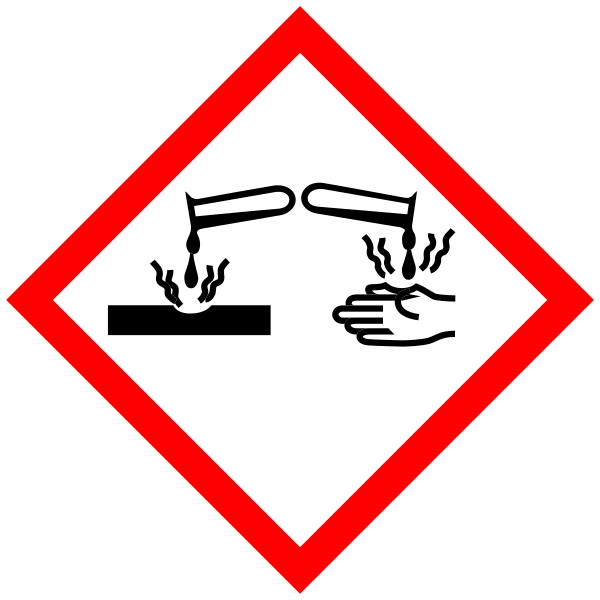 Figure 1: Chemicals should be handled with care.

The following actions can reduce corrosion,

Rusting is the red or orange coating that forms on the surface of iron when exposed to air and moisture. It is a type of corrosion. This is caused by the chemical reaction between the metal surface and the moisture and oxygen in the air. The most common substances that undergo rusting are iron and steel. Rusting does not happen due to chemical spills. But some chemicals can accelerate rusting by increasing the electrical activity between iron and oxygen. 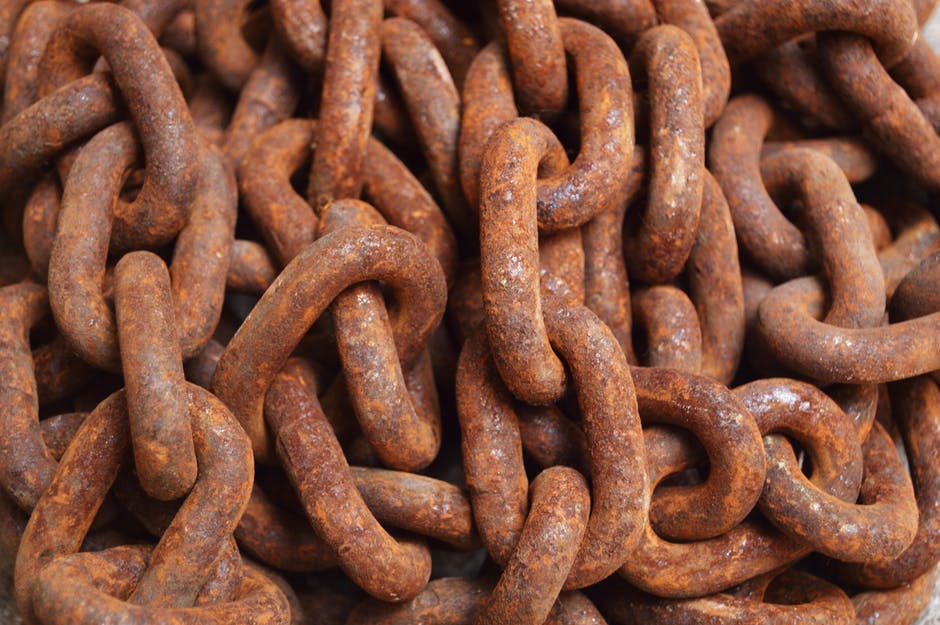 The rusting on iron or steel is also known as metallic oxidation. This is because the metal atoms on the surface get oxidized by oxygen in the air in the presence of water. For example, Fe+2 in steel can be oxidized to Fe+3 during corrosion of iron. The rate of rusting depends on several factors such as the humidity of the air, the surface area of metal that is exposed to air, etc.

There are several methods for the prevention of metals from rusting. Some of these strategies are given below.

However, stainless steel is an exception because it shows no rusting. That is due to the presence of chromium (10-20%) as a component. Chromium can form a thin film by reacting with oxygen in air and water. This thin film prevents the stainless steel from rusting.

Difference Between Corrosion and Rusting

Corrosion: Corrosion is the process of deterioration of a substance due to chemical, electrochemical or other reactions that take place on the surface of that substance.

Rusting:  Rusting is the red or orange coating that forms on the surface of iron when exposed to air and moisture.

Corrosion: Corrosion can occur on different surfaces such as skin, wood, metals, etc.

Rusting:  Rusting mainly occurs on surfaces of iron and steel.

Corrosion:  Corrosion can happen due to exposure to air or spread of chemicals on the surface.

Rusting:  Rusting can happen due to exposure to air and moisture.

Corrosion:  Corrosion can be observed as a skin burn, wood surface destruction or rusting.

Rusting:  Rusting can be observed as red or orange coating on the surface.