1. What is an Embryo
2. What is a Foetus
3. What is a Gamete
4. What is a Zygote
5. What is the difference between Embryo Foetus Gamete and Zygote 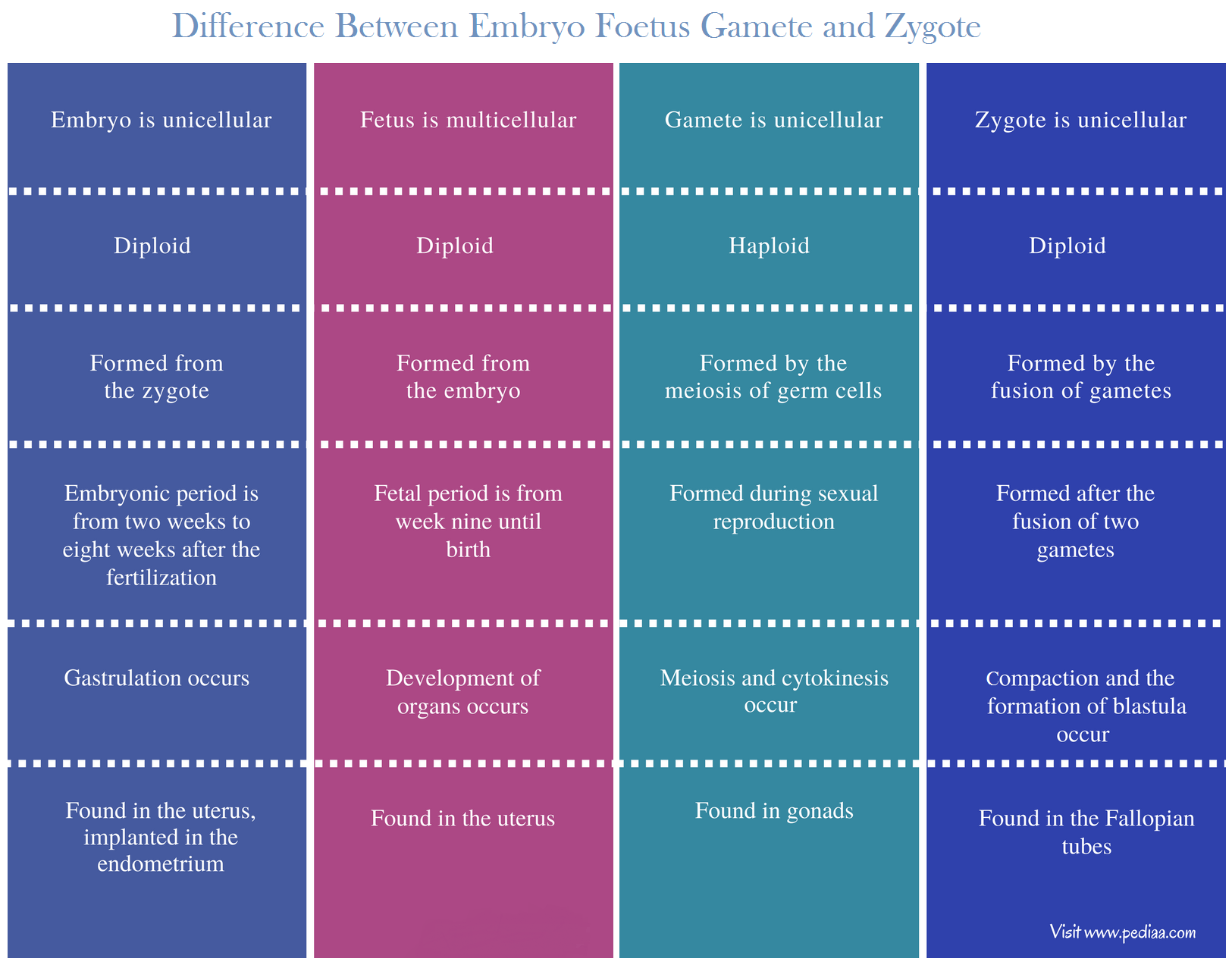 What is an Embryo

An embryo is the early development stage of multicellular diploid eukaryotes. The period of two to eight weeks of early development after the fertilization is called the embryo. Seed is the embryo of flowering plants. It contains hypothetical tissues, which can develop into roots, stem, and leaves. After the germination of plants, a planlet is grown out from the seed. A ginkgo embryo is shown in figure 1. 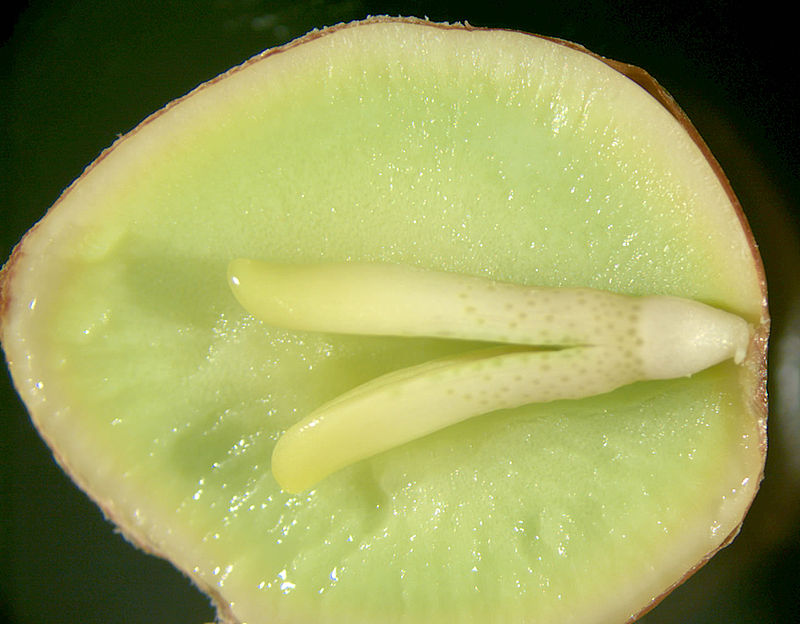 Figure 1: A ginkgo embryo with its gametophyte 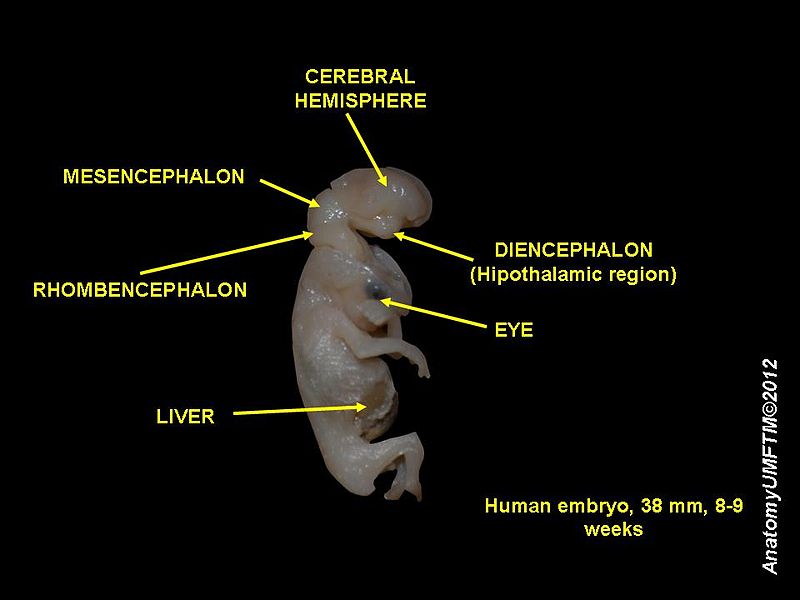 What is a Foetus

A foetus is an embryo 8 weeks after the fertilization. The term “fetus” is mostly used in medical journals instead of the term foetus. The fetal period lasts until the birth of the new organism. In humans, it lasts from week 8 to weeks 38-40 after the fertilization. After the birth, the new organism is called a ‘baby’. During the fetal period, the embryo can be recognized as a human. Fetus consists of organs, which may not be fully developed into functional organs. Uncontrolled movements and twitches can be identified due to the development of muscles and brain. Bones are found fully developed at weeks 26 to 38. Fingernails and head hairs are also developed. After weeks 38-40, birth occurs in humans.

What is a Gamete

A gamete is either a mature male or female germ cell, which is capable of fusing with other germ cells to form the opposite sex, forming a zygote. In eukaryotes, all multicellular organisms undergo sexual reproduction by producing gametes in order to create offspring. Gametes are restricted to reproductive organs of the multicellular organisms. During sexual reproduction, gametes are produced by meiosis of germ cells located in gonads. Hence they are haploid cells which regenerate the diploid chromosome number in zygote by fusing two of them together. Gametes are morphologically distinct depending on the sex. In humans, male gametes are known as sperms and female gametes are known as ova. Since gametes are haploid, the fusion of two gametes of opposite sexes would regenerate the diploid zygote. Therefore, half of the total DNA is contributed by each parent to the offspring. After fertilization, the zygote contains two sets of homologous chromosomes, each set coming from one parent. Stained human sperms are shown in figure 3. 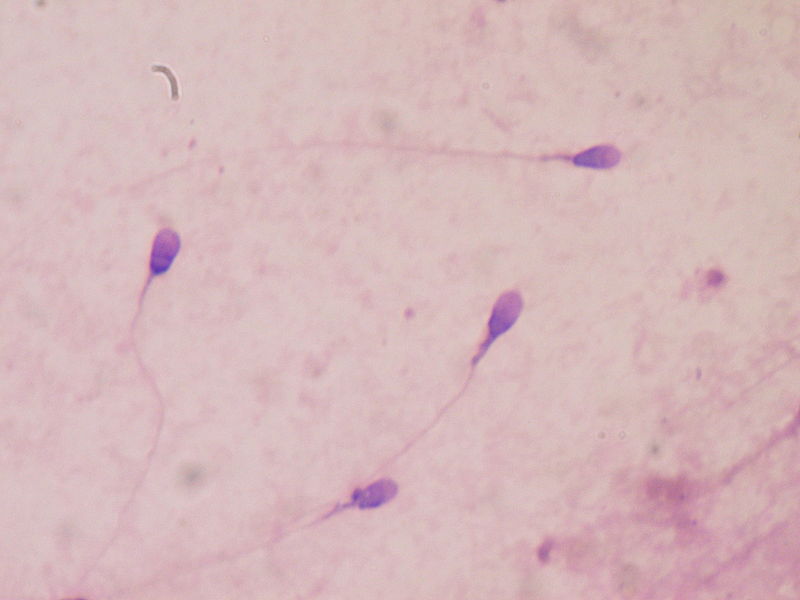 Synapsis during meiosis I promote the genetic recombination, producing different combinations of alleles in the offspring. Mutations in gametes can also occur during replication. They can be either insertions, deletions of nucleotides in DNA or even chromosomal aberrations. These mutations are carried out to the offspring through gametes. Then, the offspring may contain variations in alleles compared to their parents. The most favorable characters will be selected by natural selection.

What is a Zygote

In humans, both sperms and ova contain 23 chromosomes. During fertilization, the diploid chromosome number 46 is regenerated in the zygote. After 24 hours of fusion, human zygote starts to divide by mitosis, commencing the embryonic period. The zygote is divided into 2-cells, 4-cells, 8- cells and then 16-cells. The 16-cell stage is referred to as morula, which is found at 2 to 4 days after the fertilization. After the 4-5 days later to fertilization, the embryo which is formed through the process known as compaction is called blastocyte.

During compaction, cell junctions like desmosomes and gap junctions are formed between cells in the embryo, making the outer part tightly bound. Then a cavity is formed, creating a ball of cells inside the embryo. The outer cell layer is called trophoblast and the inner cell ball is called inner cell mass (ICM). The stage that consists of a ICM is called the blastula stage. The structure at blastula stage is called blastocyte. Cells in trophoblast give rise to the tissues of chorion in placenta. The ICM gives rise to the embryo and the associated structures like yolk sac, amnion and allantois. In 64-cell stage, a separate cell layer is formed from the trophoblast, which is differentiated into the blastomere. Blastomere is the first differentiation found in the early development of humans. After a one week of fertilization, first differentiation is followed by morula implantation. Formation of blastula from the zygote is shown in figure 4.

Embryo: Embryo is formed from the zygote.

Fetus: Fetus is formed from the embryo.

Gamete: Gamete is formed by the meiosis of germ cells.

Zygote: Zygote is formed by the fusion of gametes.

Embryo: Embryonic period is from two weeks to eight weeks after the fertilization.

Fetus: Fetal period is from week nine until birth.

Zygote: Zygote is formed after the fusion of two gametes.

Embryo: Embryogenesis is the process which forms the embryo. Gastrulation occurs during the embryonic period.

Gamete: Meiosis and cytokinesis occur during the formation of gametes.

Zygote: Compaction and the formation of blastula occur in the zygote.

Embryo: The embryo is found in the uterus, implanted in the endometrium.

Fetus: The fetus is found in the uterus.

Gamete: The gamete is found in gonads.

Zygote: The zygote is found in the Fallopian tubes.

Gamete is considered as the cellular unit which carries genetic information to the offspring during sexual reproduction. Zygote is formed by the fusion of two gametes during fertilization. It starts to be divided by mitosis during the germinal period, increasing the cell number. The 16-cell stage is referred to as the morula, which is then developed into the blastocyte. The blastocyte starts the differentiation and is implanted in the endometrium of the uterus. Implantation is completed weeks 2 after the fertilization. Then, the differentiation of germ layers occurs, forming the gastrula. This stage is referred to as the embryo. Embryo lasts for 8 weeks, where the organogenesis can be identified.  From week 9 until birth, the embryo is called the fetus. Fetus looks like a human. During fetal period, the development of the organs occurs, preparing the new organism for its birth. Therefore, zygote, embryo and fetus are the three stages of the prenatal development of vertebrates.  The main difference between embryo fetus gamete and zygote is in their functions during each stage.