The proteins of the immune system that bind to the antigens of the foreign substances are known as immunoglobulins (Ig) or antibodies. They are produced to fight against pathogens such as bacteria, virus, and parasites. The main function of Ig is to facilitate the destruction of foreign pathogens. IgG and IgM are two classes of immunoglobulins. The main difference between IgG and IgM is that IgG represents the late stage response to a disease whereas IgM is produced immediately after the exposure to a particular antigen. IgGs can be found throughout the body, mainly in body fluids while IgMs are found in blood and lymph. IgGs establish a long-term response to a particular antigen, providing long-lasting immunity. However, IgMs establish a short-term response.

IgG refers to a class of immunoglobulins that consist of the most abundant type of antibodies circulating in the blood. IgG is a monomer predominantly present in the serum. It is the most abundant type of immunoglobulins that constitutes about 75% of the total immunoglobulins. IgGs are mainly responsible for the protection of newborns during the first month of birth as they can cross the mother’s placenta and reach the baby. In adults, IgGs are found in blood, lymph, peritoneal fluid, and cerebrospinal fluid. The production of IgGs occurs as a delayed response, but specifically to a particular antigen. However, they remain in the body for longer periods. IgGs are important in the passive immunization due to the longevity of the IgGs in the serum. Foreign antibodies are injected into the body during passive immunization as vaccines. The anatomy of IgG is shown in figure 1. 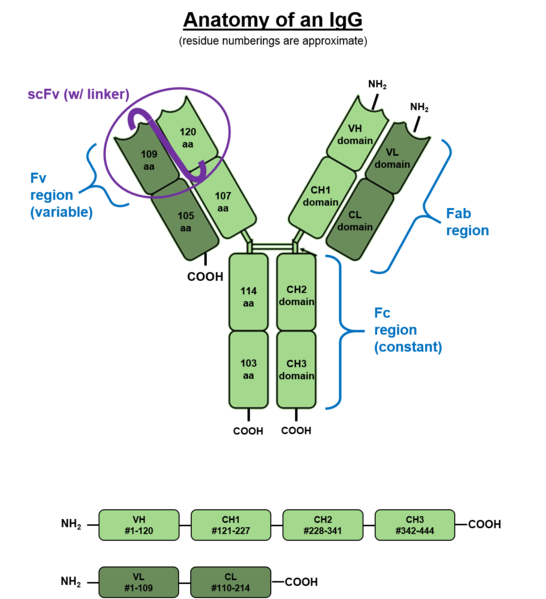 The four IgG subclasses are IgG1, IgG2, IgG3, and IgG4. IgG1 is the main subclass of IgGs. IgG3 has the highest ability for complement activation. Both IgG1 and IgG3 have the highest affinity to antigens.

IgM refers to a class of immunoglobulins composed of a pentamer structure that includes the primary antibodies released early in the immune response. It occupies 10% of the serum immunoglobulin content. IgM is the most efficient complement-fixing immunoglobulin. It is also expressed on the plasma membrane of the B cells as a monomer. In the pentamer structure, each monomer unit is made up of two light chains and two heavy chains. The structure of IgM is shown in figure 2. 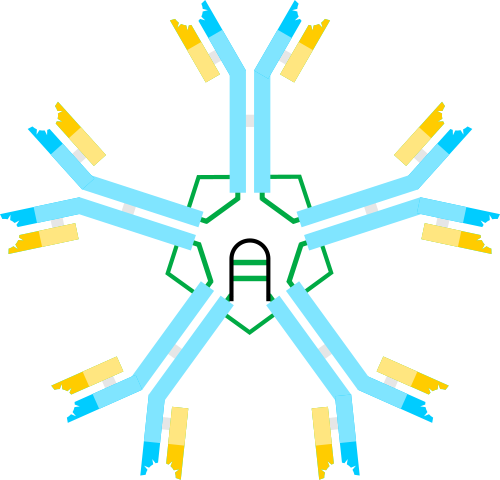 IgMs are responsible for agglutination and cytosolic reactions as they are the first-emerging antibodies during an adaptive immune response. They are predominantly found in blood and lymph.

Similarities Between IgG and IgM

Difference Between IgG and IgM

IgG: IgG refers to a class of immunoglobulins containing the most abundant type of antibodies that circulate in the blood.

IgM: IgM refers to a class of immunoglobulins composed of a pentamer structure that includes the primary antibodies released early in the immune response.

IgG: IgG is produced at the latest stages of the immune response.

IgM: IgM is produced in the early stages of the immune response.

Size of the Immunoglobulin

IgG: IgG is a monomer.

IgM: IgM is a pentamer.

IgG: IgG is the most abundant type of immunoglobulin.

Travel through the Placenta

IgG: IgG can travel through the placenta from mother to the child.

IgM: IgM is unable to travel through the placenta.

IgG: IgGs are found in all body fluids.

IgM: IgMs are found in blood and lymph.

IgM: IgMs are temporary antibodies and are replaced by IgG.

IgM: IgMs provide protection against newly-emerging pathogens in the body.

IgG: The IgG binds to the epitopes, activating the complement system since they emerge later during the adaptive immune response.

IgM: The IgMs are responsible for the agglutination and cytosolic reactions since they are the first-emerging antibodies during the adaptive immune response.