Introns and exons are considered as two features of a gene containing coding regions known as exons, which are interrupted by non-coding regions known as the introns. Exons encode proteins and the DNA regions between the exons are introns. Only eukaryotes contain introns in the coding region. In eukaryotes, both introns and exons are transcribed into form the mRNA primary transcript. During mRNA processing, introns are removed from the mRNA primary transcript, producing a mature mRNA, which leaves the nucleus in the cytoplasm in order to be translated into an amino acid sequence. The main difference between introns and exons is that introns stay inside the nucleus, keeping the DNA safe in the genes whereas exons leave the nucleus in order to be translated into a protein. 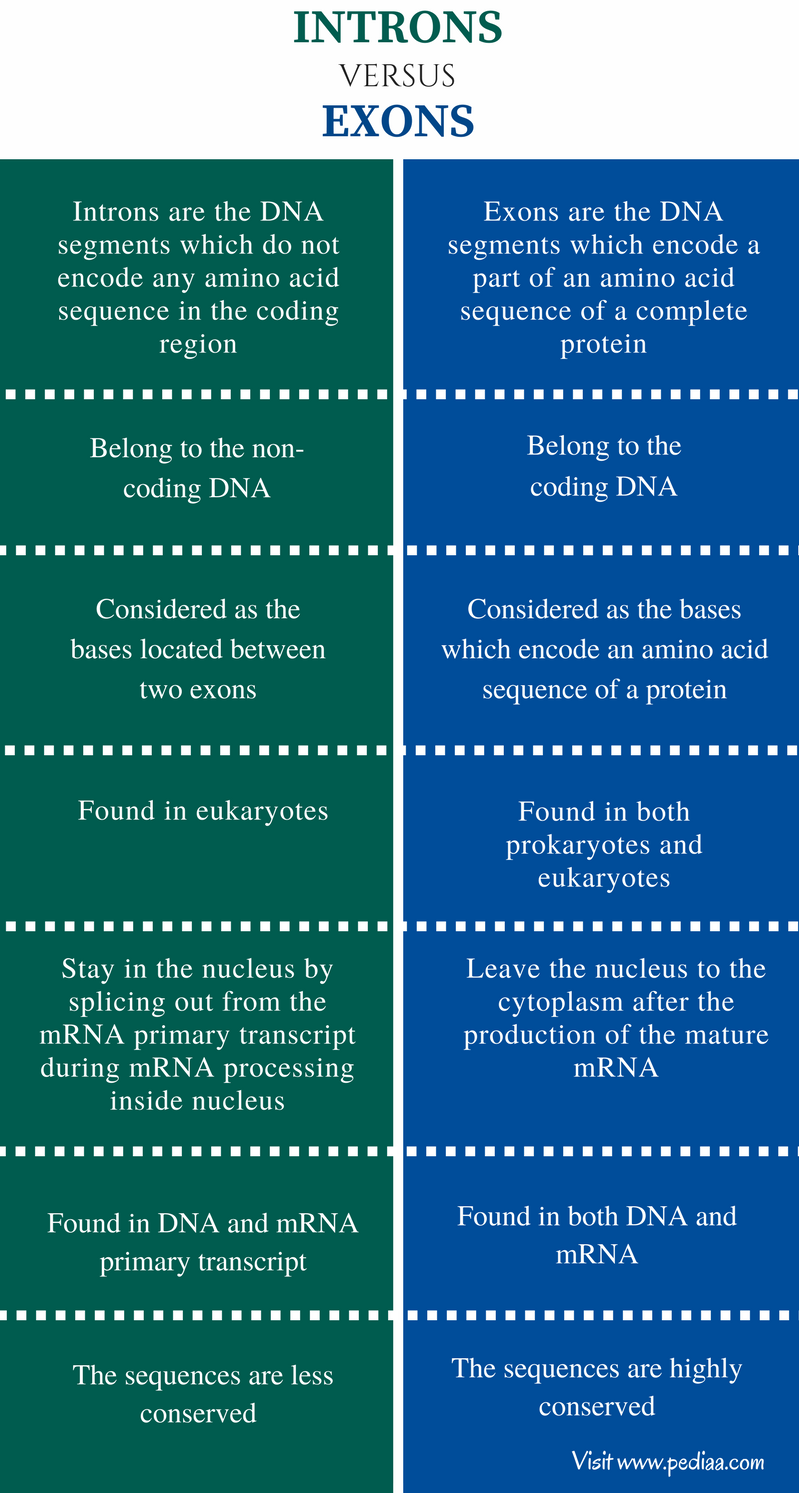 An intron is a sequence of nucleotides found in both DNA and RNA, interrupting the sequence of the gene. Introns are found in both intergenic regions of the gene and mRNA primary transcript. The word intron means “In the Nucleus”. Therefore, removal by RNA splicing within the nucleus is a universal feature in introns. Hence, mature RNA lack introns. On the other hand, prokaryotes lack RNA splicing mechanisms. Therefore, specific regions like exons and introns cannot be identified in prokaryotes. The structure of the mRNA primary transcript is also called pre-mRNA; its splicing of exons in order to form the mature mRNA is shown in figure 1.

Figure 1: Pre-mRNA and its splicing into a mature mRNA

The biological function of introns is not clearly known. Introns in the genome serve as a substantial fraction of DNA, keeping the DNA in the genome safe. Alternative splicing of introns promotes the production of a wide variety of proteins from a single mRNA primary transcript.

An exon is the coding region of the gene, which encodes an amino acid sequence of a functional protein. The exons are interrupted by introns in eukaryotic genes. But after undergoing the processing, the mature mRNA is only composed of exons. The process of removing introns is known as splicing. Alternative splicing promotes the production of different combinations of amino acid sequences by combining different combinations of exons together. Therefore, exons are responsible for the amino acid sequence of the polypeptide. The entire exon set in the genome is known as the exome. In the human genome, exome consists of only 1.1% of the whole genome, whereas the introns consist of 24% of the genome and 75% of the genome consists of intergenic regions. Both protein-coding regions and 5’ and 3’ untranslated regions (UTRs) are contained by exons. The 5’-UTR is contained by the first exon. Gene structure containing exons, which are interrupted by introns, is shown in figure 2.

Difference Between Introns and Exons

Introns: Introns are DNA segments which do not encode any amino acid sequence in the coding region.

Exons: Exons are the DNA segments which encode a part of an amino acid sequence of a complete protein.

Introns: Introns are considered as the bases located between two exons.

Exons: Exons are the bases which encode an amino acid sequence of a protein.

Introns: Introns are only found in eukaryotes.

Exons: Exons are found in both prokaryotes and eukaryotes.

Introns: Introns stay in the nucleus by splicing out from the mRNA primary transcript during mRNA processing inside the nucleus.

Exons: Exons leave the nucleus to the cytoplasm after the production of the mature mRNA.

Introns: The sequences in the introns are less conserved compared to exons.

Exons: The sequences in the exons are highly conserved.

Presence in the Genome

Introns: Introns are found in DNA and mRNA primary transcript.

Exons: Exons are found in both DNA and mRNA.

Introns: The function of introns is not clearly known but it is considered to be a substantial fraction of DNA.

Exons: The function of exons is to be translated into a protein.

A gene is a segment of DNA which yields a functional product either a polypeptide or an RNA. The intergenic regions of a gene are composed of introns. That means, a gene in eukaryotes consists of a coding region structure, which is split into segments called exons; introns can be found between two exons. Introns belong to non-coding DNA. All exons along with the intergentic regions are transcribed by RNA polymerase into the primary transcript of mRNA. Introns are removed from the primary transcript during mRNA processing. Thus, a mature mRNA only consists of exons. The splicing of exons can occur in an alternative manner in polycistronic mRNAs in prokaryotes, producing more than one type of mature mRNAs from a single mRNA primary transcript. Introns in the genome are considered as a substantial fraction of DNA while exons encode for proteins. Hence, the main difference between introns and exons is their function in the genome.