“The fear of death follows from the fear of life. A man who lives fully is prepared to die at any time.” – Mark Twain

“Freedom is not worth having if it does not include the freedom to make mistakes.” – Mahatma Gandhi

We also use inverted commas to mark off words or a phrase that is being discussed, or that is borrowed from somewhere else.

Do you know what is an ‘integrated circuit’ is?

This theory is known as ‘the Quantum theory.’

Sometimes inverted commas are also used to draw attention to a skeptic or ironic remark. They might indicate that the writer is indicating the exact opposite of what he has written.

Thank you so much for your “help”.

Quotation marks can be also used to refer to titles of different works.

“I wondered lonely as a cloud” is a poem written by Wordsworth. 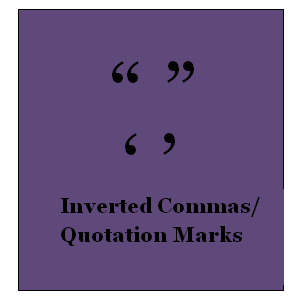 In the above examples, you might have noticed that some examples contain single quotes whereas some use double quotes. Many new grammar guides indicate there is no strict rule for this usage. However, it is important to note that double quotes are more preferred in American English whereas British English prefers single quotes.

She narrated, “I was just coming out of the house when the man shouted ‘watch out.’ I just ran inside.”

“The woman in the blue dress shouted ‘get out of here.’ I thought she was talking to me.” he explained.