A lysosome is a membrane-enclosed organelle inside the cell, which contains enzymes for the degradation of biological polymers like proteins, polysaccharides, lipids and nucleic acids. It is a spherical-shaped vesicle, functioning as the cell’s degradative system of both biological polymers and obsolete components inside the cytoplasm. Lysosomes are comparatively large in size; the size varies from 0.1-1.2 µm depending on the materials taken up for the digestion. They are composed of membrane proteins and lysosomal lumen enzymes. Lysosomal lumen contains about 50 different digestive enzymes, which are produced in the rough endoplasmic reticulum and exported into the Golgi apparatus. Small vesicles, containing the enzymes released from the Golgi, are later fused to form a large vesicle. The enzymes destined in the lysosomes are tagged with mannose 6-phosphate in the endoplasmic reticulum.

Hydrolytic enzymes in the lysosome are acid hydrolases, requiring acidic pH, ranging from 4.5 to 5.0 for their optimal activity. Protons (H+ ions) are pumped into the lumen of the lysosome in order to maintain the acidic pH as it is. The pH in the cytosol is usually 7.2. Required acidic pH by the hydrolytic enzymes ensures that hydrolytic reactions do not occur in the cytosol. Genetic defects in the genes, which encode the lysosomal digestive enzymes, lead to the accumulation of a particular unwanted substance in the cytosol, causing lysosomal storage diseases like Gaucher’s disease, cardiovascular diseases, neurodegenerative disorders and several cancers. A lysosome in a cell is shown in figure 1. 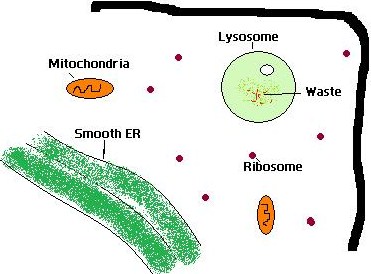 The hydrolytic enzymes in the lysosomes break down materials like biomolecules, exhausted organelles and other unwanted materials in the cytoplasm by engulfing them into the lysosome. Lysosomes are formed during endocytosis, engulfing materials from the outside of the cell. The major class of hydrolytic enzymes is cathepsins. The lysosome is considered to act as the cells’ waste disposal system. In addition to unwanted polymer degradation, lysosomes exhibit some other functions. They fuse with other organelles to digest cellular debris or large structures in the process called autophagy. Moreover, lysosomes along with phagosomes are capable of clearing out the damaged structures including bacteria and viruses by a process called phagocytosis. Besides degradation, lysosomes are involved in secretion, cell signaling, plasma membrane repair, and energy metabolism.

What is a Peroxisome

A peroxisome is a membrane-enclosed organelle found in all eukaryotes, containing enzymes to break down metabolic hydrogen peroxides. Though peroxisomes are morphologically similar to lysosomes, they are comparatively small. The diameter of a peroxisome is 0.1 –1.0 µm. Proteins required by peroxisomes are synthesized by free ribosomes and obtained from the cytosol. These proteins are tagged with peroxisomal targeting signal (PTS) in the cytosol. The C terminus of the target protein is tagged with PTS1 and the N terminus with PTS2 and are transported into peroxisomes by the cargo proteins, Pex5 and Pex7, respectively. At least 50 distinct peroxins are transported into the peroxisome. A peroxisome in the cell is shown in figure 2.

Difference Between Lysosome and Peroxisome

Lysosome: Lysosomes break down biological polymers like proteins and polysaccharides.

Lysosome: Lysosomes are responsible for the digestion in the cell.

Peroxisome: Peroxisomes are responsible for the protection of the cell against metabolic hydrogen peroxide.

Lysosome: Lysosomes are only found in animals.

Peroxisome: Peroxisomes are found in all eukaryotes.

Lysosome: Lysosomes are derived from either Golgi apparatus or endoplasmic reticulum.

Peroxisome: Peroxisomes are derived from the endoplasmic reticulum and are capable of replicating by themselves.

Signal Sequence of the Target Proteins

Lysosome: The proteins destined in the lysosomes are tagged with mannose 6-phosphate.

Peroxisome: The proteins destined in the peroxisomes are tagged with peroxisomal targeting signal (PTS).

Lysosome: Lysosomes are involved in endocytosis, autophagy, and phagocytosis.

Peroxisome: Peroxisomes are involved in biosynthesis of lipids and photorespiration.

Lysosome: Degradative reactions in the lysosomes do not generate energy.

Lysosome and peroxisome are two organelles, containing enzymes that catalyze various biochemical processes in the cell. The main difference between lysosome and peroxisome is the enzymes they contain and their functions. Lysosomes contain enzymes, which degrade biopolymers like proteins, lipids, polysaccharides and nucleic acids. Peroxisomes contain enzymes for the oxidation of organic compounds, generation of metabolic energy. Both lysosomes and peroxisomes are structurally similar, but varies in size. Lysosomes are usually large compared to peroxisomes and their size varies with the materials, which are uptaken into the organelle. Both organelles are enclosed by a single membrane.