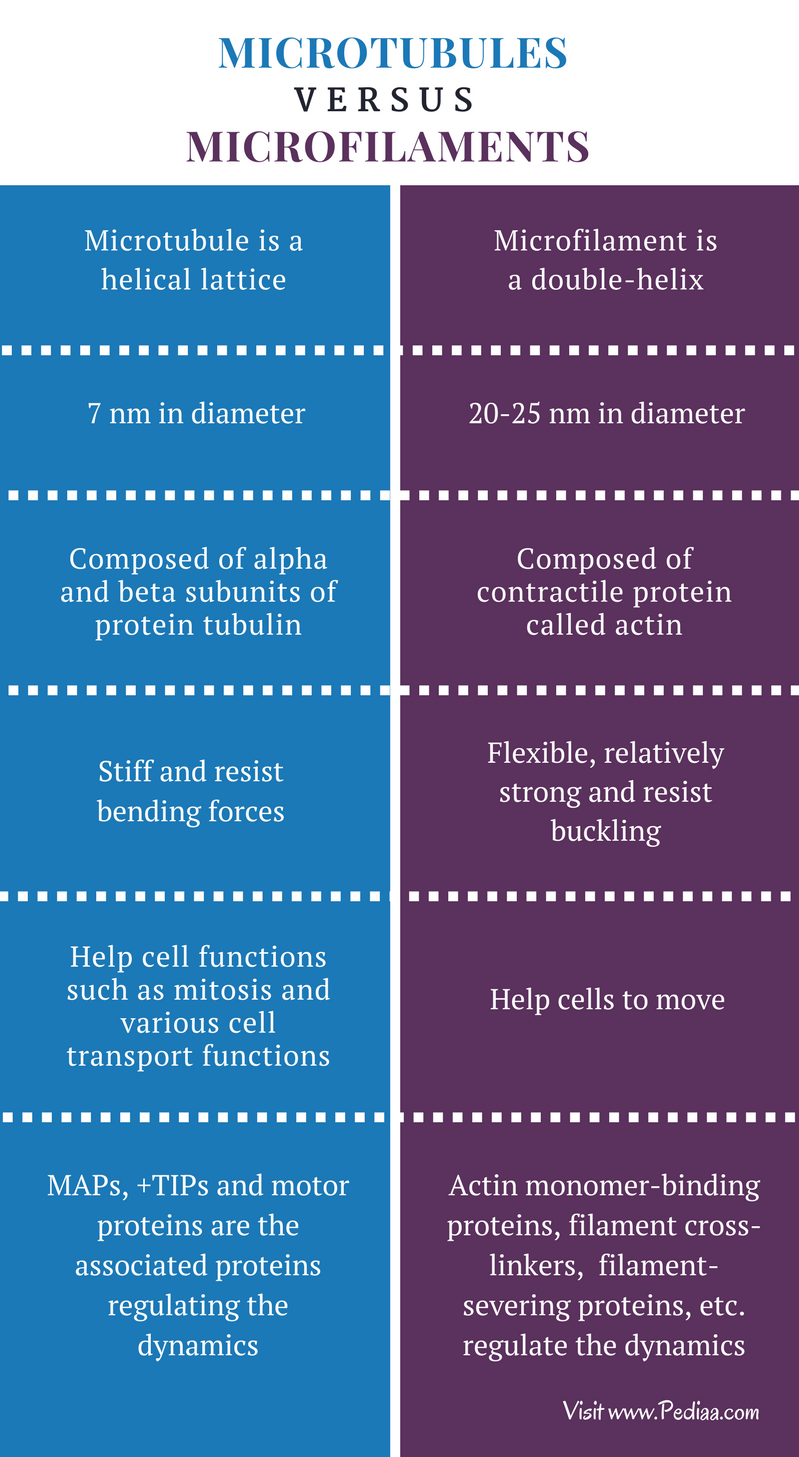 Microtubules are polymers of tubulin protein found everywhere in the cytoplasm. Microtubules are one of the components of the cytoplasm. They are formed by the polymerization of the dimer alpha and beta tubulin. The polymer of tubulin can grow up to 50 micrometers in a highly dynamic nature. The outer diameter of the tube is around 24 nm, and the inner diameter is around 12 nm. Microtubules can be found in eukaryotes and bacteria.

Eukaryotic microtubules are long and hollow cylindrical structures. Inner space of the cylinder is referred to as the lumen. The monomer of the tubulin polymer is α/β-tubulin dimer. This dimer associates with their end-to-end to form a linear protofilament which is then laterally associated to form a single microtubule. Usually, around thirteen protofilaments are associated in a single microtubule. Thus, the amino acid level is 50% in each α and β – tubulins in the polymer. The molecular weight of the polymer is around 50 kDa. The microtubule polymer bears a polarity between two ends, one end contains a α-subunit, and the other end contains a β-subunit. Thus, the two ends are designated as (-) and (+) ends, respectively. 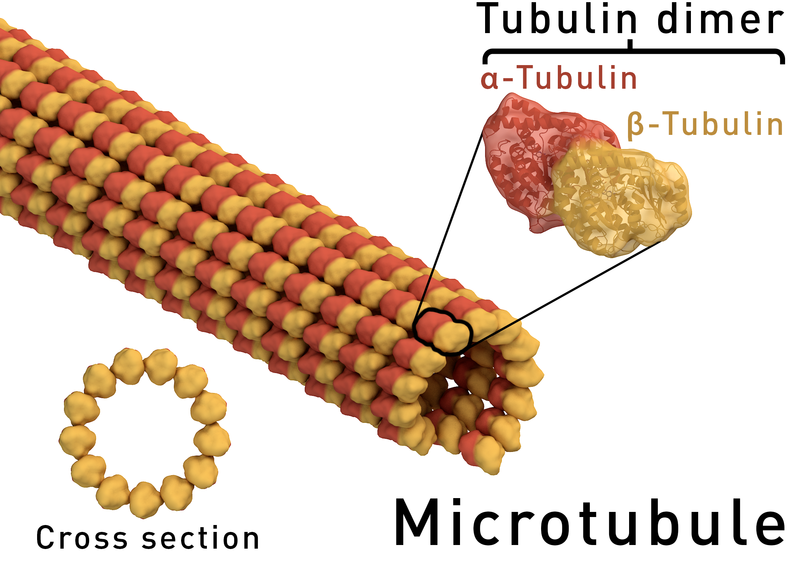 Figure 1: Structure of a Microtubule

Organization of microtubules in a cell varies according to the cell type. In epithelial cells, (-) ends are organized along the apical-basal axis. This organization facilitates the transport of organelles, vesicles, and proteins along the apical-basal axis of the cell. In mesenchymal cell types like fibroblasts, microtubules anchor to the centrosome, radiating their (+) end to the cell periphery. This organization supports the fibroblast movements. Microtubules, along with the assistant of motor proteins, organize Golgi apparatus and the endoplasmic reticulum. A fibroblast cell, containing the microtubules is shown in figure 2. 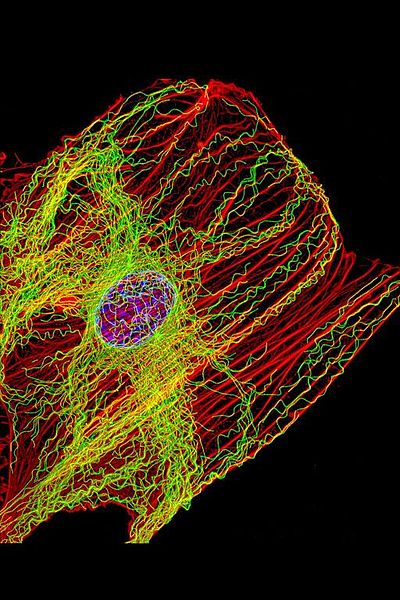 Figure 2: Microtubules in a fibroblast cell
Microtubules are fluorescent labeled in green color and actin in red color. 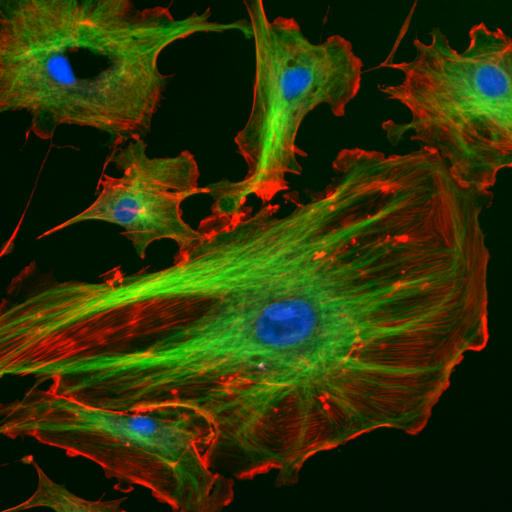 Microtubules allow gene regulation through the specific expression of transcription factors, which maintain the differential expression of genes, with the aid of dynamic nature of microtubules.

Various dynamics of microtubules such as the rates of polymerization, depolymerization, and catastrophe are regulated by microtubule-associated proteins (MAPs). Tau proteins, MAP-1, MAP-2, MAP-3, MAP-4, katanin, and fidgeting are considered as MAPs.  Plus-end tracking proteins (+TIPs) like CLIP170 are another class of MAPs. Microtubules are the substrates for the motor proteins, which are the last class of MAPs. Dynein, which moves towards the (-) end of the microtubule and kinesin, which moves towards the  (+) end of the microtubule, are the two types of motor proteins found in cells. Motor proteins play a major role in cell division and vesicle trafficking. Motor proteins hydrolyze ATP in order to generate mechanical energy for the transportation. 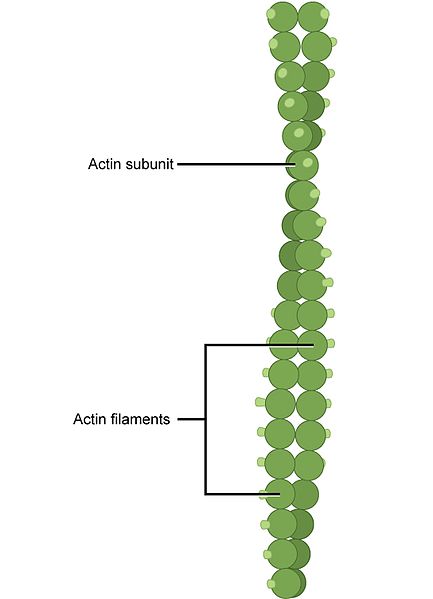 Three of the G-actin monomers are self-associated to form a trimer. Actin, which is ATP-bound, binds with the barbed end, hydrolyzing the ATP. The binding capacity of the actin with the neighboring subunits is reduced by autocatalyzed events until the former ATP is being hydrolyzed. Actin polymerization is catalyzed by actoclampins, a class of molecular motors. Actin microfilaments in cardiomyocytes are shown, stained with green color in figure 4. The blue color shows the nucleus. 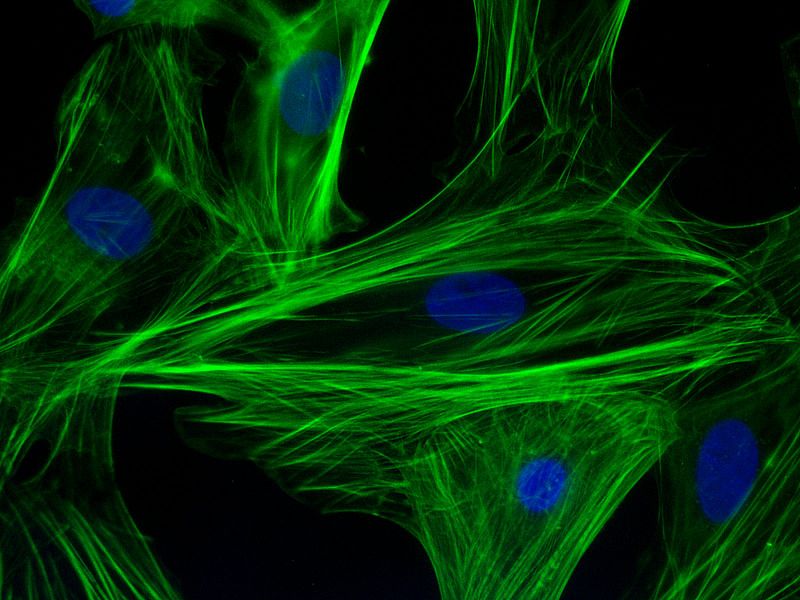 Microfilaments are involved in cytokinesis and cell motility like amoeboid movement. Generally, they play a role in cell shape, cell contractility, mechanical stability, exocytosis, and endocytosis. Microfilaments are strong and relatively flexible. They are resistant to fractures by tensile forces and buckling by multi-piconewton compressive forces. The motility of the cell is achieved by the elongation of one end and contraction of the other end. Microfilaments also act as the actomyosin- driven contractile molecular motors, along with the myosin II proteins.

The formation of the actin filaments are regulated by the associated proteins with microtubules like,

Difference Between Microtubules and Microfilaments

Microtubules: Microtubules are composed of alpha and beta subunits of protein tubulin.

Microfilaments: Microfilaments are flexible and relatively strong. They resist buckling due to compressive forces and filament fracture by tensile forces.

Microtubules: MAPs, +TIPs and motor proteins are the associated proteins regulating the dynamics of microtubules.

Microfilaments: Actin monomer-binding proteins, filament cross-linkers, actin-related protein 2/3 (Arp2/3) complex and filament-severing proteins are involved in the regulation of the dynamics of microfilaments.