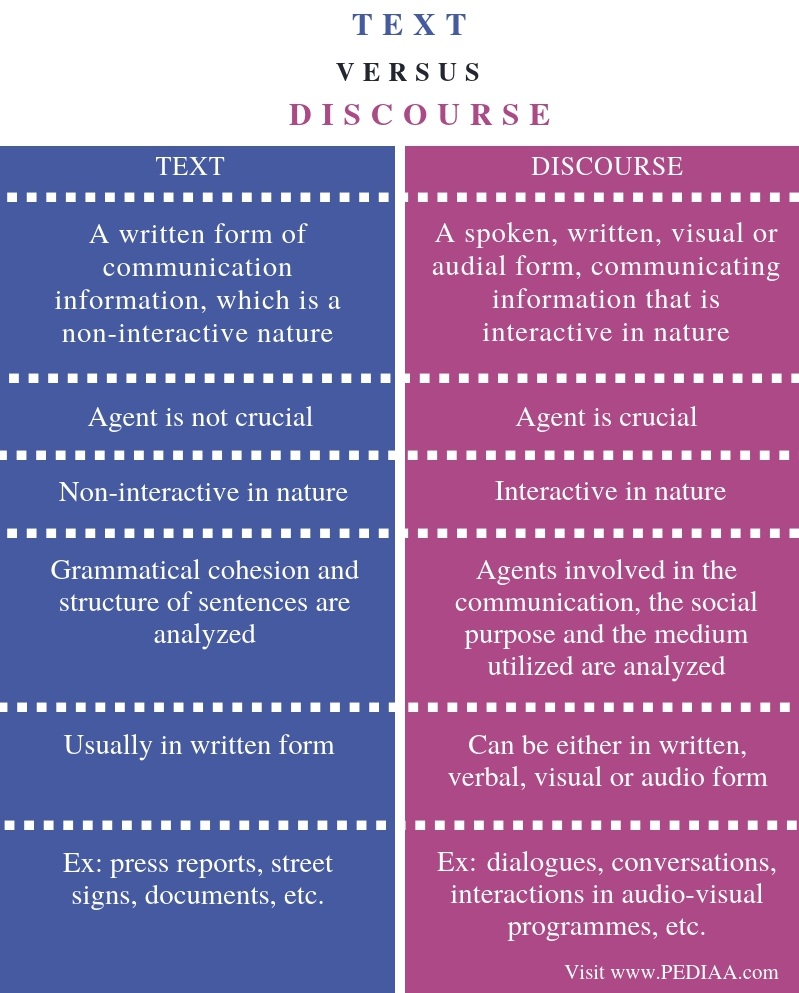 What is a Text

A text includes some information, specifically in the written form or printed form. Thus, it is noteworthy that the agent of a text is not crucial: there may or may not be an agent. And the agent has no direct impact of the content to the reader. For example, consider the text in a subject textbook, an essay, or a press release where the information is merely reported with or without an agent or the speaker. The information present in a text is usually non-interactive, or it does not contain an indication of conversational speech. Thus, the reader only reads and becomes aware of the facts presents. As defined by the Linguistic glossary terms, text is “a sequence of paragraphs that represents an extended unit of speech.” Therefore, the grammatical cohesion is a fundamental factor in a text.

In order to analyze the content of a text, one should be aware of the linguistic and grammatical categories of the language, and the information provided according to the meaning, grammatical devices used, structure, meaning, etc. Therefore, by analyzing the overall structure of the text, one is able to grasp the meaning of the text. Thus, textual analysis, in brief, is the analysis of these grammatically cohesive sentences, imparting some information. 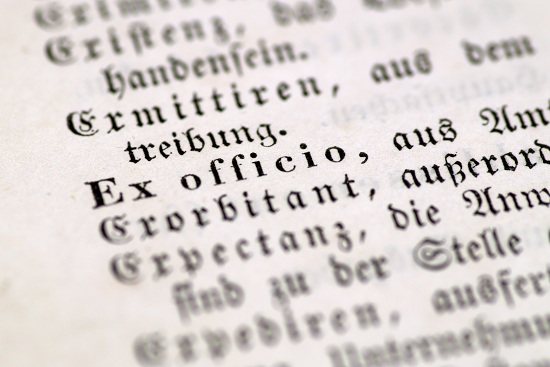 However, in literary studies, there are several text types: narrative texts, descriptive texts, expository texts, etc. in which discourse can be included as well.

A discourse is necessarily interactive, which means there is always an agent to the information in discourse. In simple terms, discourse is often conversational communications between people. Therefore, under linguistics and literary theory, discourse is defined as “a social event of multi-layered communication in a variety of media: verbal, textual, visual and audial, that has an interactive social purpose.”

Thus, interactive quality is a primary requirement in discourse. In other words, the existence of an agent to the information defines what discourse means. Therefore, unlike a text, a discourse can have cohesive sentences as well as utterances of the communicating agents. In other words, discourse depicts the usage of language in for social purposes. This is the basic difference between text and discourse. 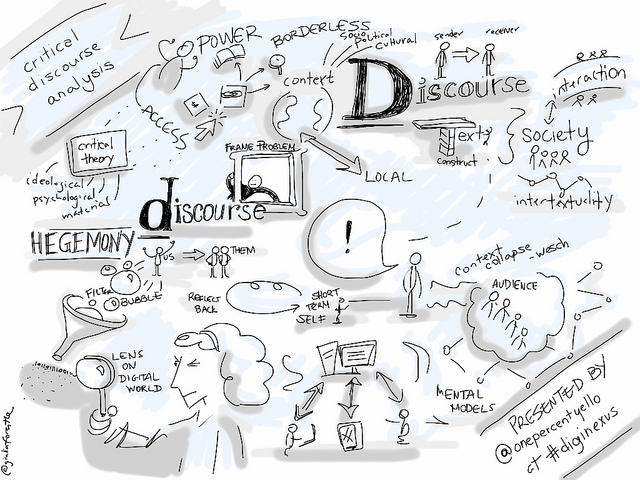 Therefore, to analyze a discourse, one should study the persons or the agents involved in the communication (who to whom), the purpose of them (the social purpose), and medium used (verbal, written, audio or visual). Thus, to grasp the meaning of discourse, one should analyze all these three basic elements in the discourse.

Similarity Between Text and Discourse

Difference Between Text and Discourse

Text is usually a written form of communication information, which is a non-interactive nature. In contrast, discourse can be from spoken, written, visual and audial form, communicating information that is interactive in nature.

The agent is not crucial for the text. However, the agent is crucial, and it is that what makes up a discourse. This is the main difference between text and discourse.

In a text, the grammatical cohesion and the structure of sentences are analyzed whereas, in discourse, the agents involved in the communication, the social purpose and the medium utilized are analyzed to comprehend the meaning of it. This is an important difference between text and discourse.

Furthermore, the text is usually in written form whereas discourse can be either in written, verbal, visual or audio form.

Examples of texts include press reports, street signs, documents, etc. whereas discourse can be dialogues, conversations, interactions in audio-visual programmes, etc, anything that depicts the social usage of the language.