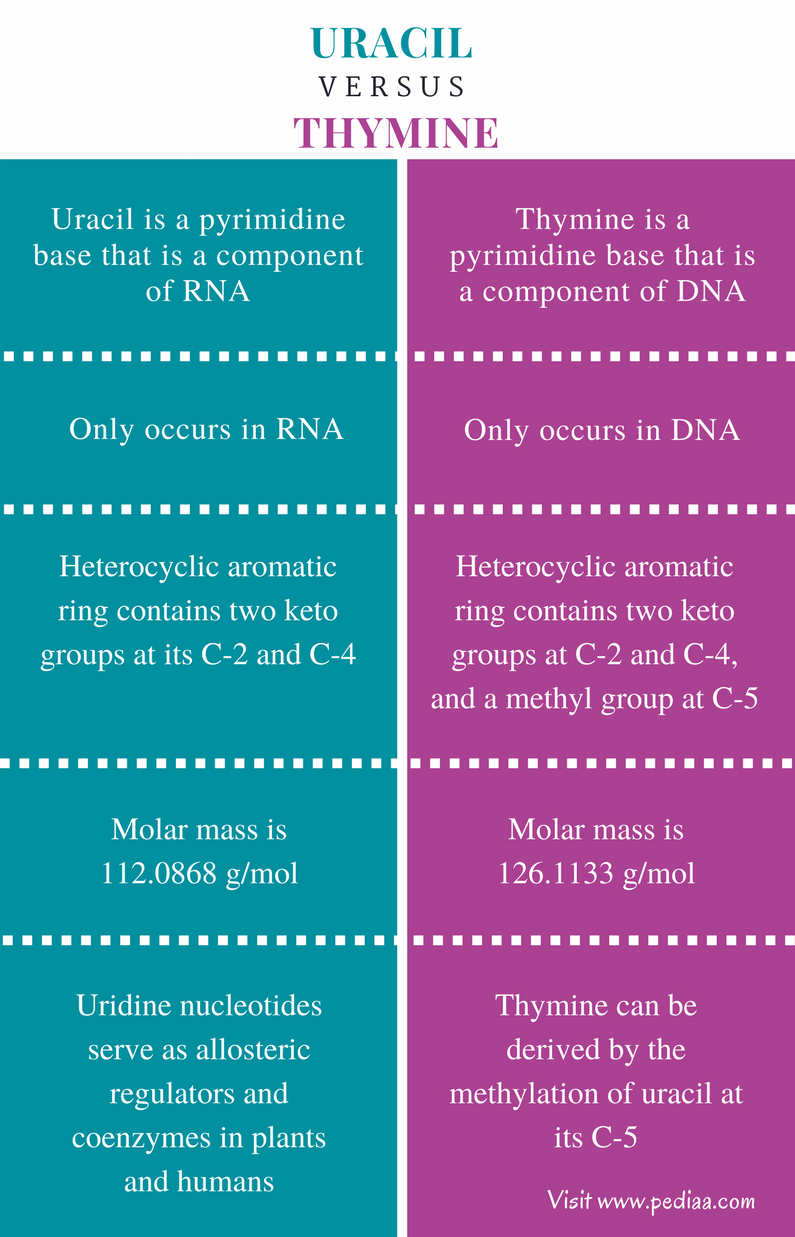 Uracil is one of the pyrimidine bases found only in RNA. It contains two keto groups at C-2 and C-4 of its heterocyclic pyrimidine ring. Uracil attaches to ribose through a glycosidic bond, forming the nucleoside, uridine. The phosphorylation of uridine produces its mono-, di- and triphosphates. In RNA, uracil complementary base pairs with adenine via two hydrogen bonds. Uracil is capable of base pairing with other bases in the RNA strand depending on the arrangement. It rarely occurs in DNA as an evolutionary change, which increases the DNA stability. Uridine nucleotides serve as allosteric regulators and coenzymes in plants and humans. Uracil is a weak acid. Therefore, it undergoes oxidation, alkylation, and nitration. It also reacts with elemental halogens. Uracil is capable of absorbing UV. 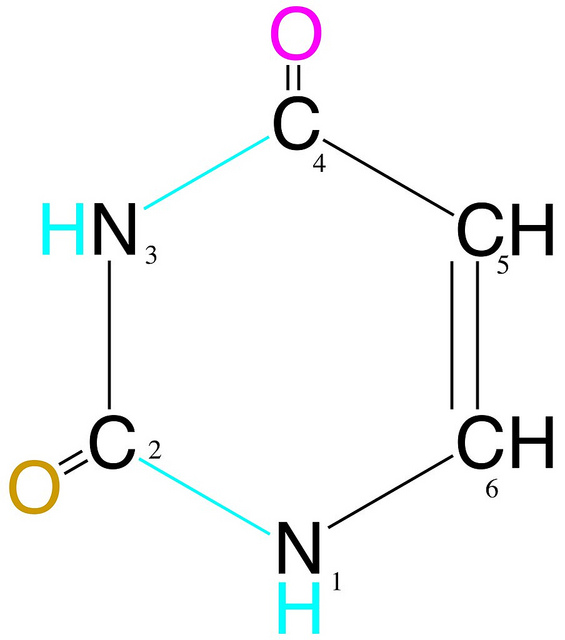 Thymine is another type of pyrimidine base found only in DNA. It contains two keto groups at C-2 and C-4 as well as a methyl group at C-5. Thymine form a nucleoside with deoxyribose called deoxythymidine. The phosphorylation of deoxythymidine is phosphorylated into deoxythymidine mono-, di- and triphosphates. Deoxythymidine triphosphate (dTTP) serves as the thymine building block of DNA. In the DNA double-helix, thymine complementary base pairs with adenine via two hydrogen bonds. Thymine can be derived by the methylation of uracil at C-5 of its pyrimidine ring. Hence, thymine is also called 5-methyluracil. In the presence of UV, thymine forms dimes with adjacent thymine or cytosine bases, causing kinks in the DNA double-helix. 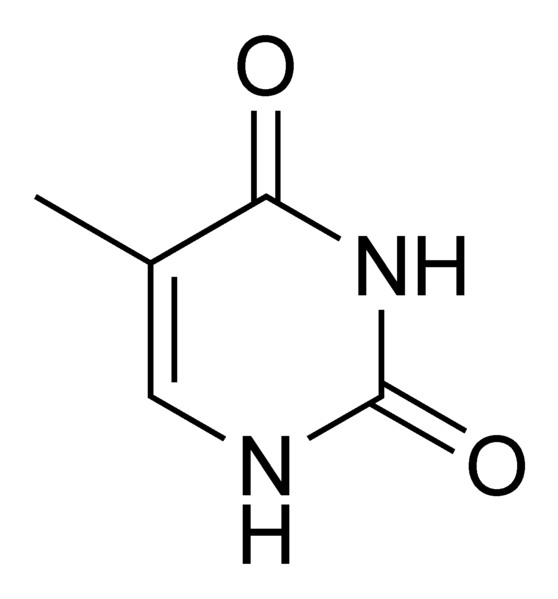 Difference Between Uracil and Thymine

Uracil: Uracil is a pyrimidine base that is a component of RNA.

Thymine: Thymine is a pyrimidine base that is a component of DNA.

Uracil: Uracil only occurs in RNA.

Thymine: Thymine only occurs in DNA.

Uracil: The heterocyclic aromatic ring of uracil contains two keto groups at its C-2 and C-4.

Thymine: The heterocyclic aromatic ring of thymine contains two keto groups at C-2 and C-4 as well as a methyl group at C-5.

Uracil: Uridine nucleotides serve as allosteric regulators and coenzymes in plants and humans.

Thymine: Thymine can be derived by the methylation of uracil at its C-5.

Uracil and thymine are two of the pyrimidine nucleotides found in nucleic acids. Pyrimidine ring is a heterocyclic aromatic structure, which is made up of carbon and nitrogen atoms. Both chemical structures of uracil and thymine are very similar. They only differ by the presence of a methyl group in C-5 of thymine. Uracil only occurs in RNA while thymine only occurs in DNA. This is the difference between uracil and thymine. DNA is more stable when compared to RNA due to the presence of thymine in its strand. In cancer treatment, 5-fluorouracil (5-fU) is used to substitute both uracil and thymine during DNA replication. This inhibits the DNA synthesis in actively dividing cells.