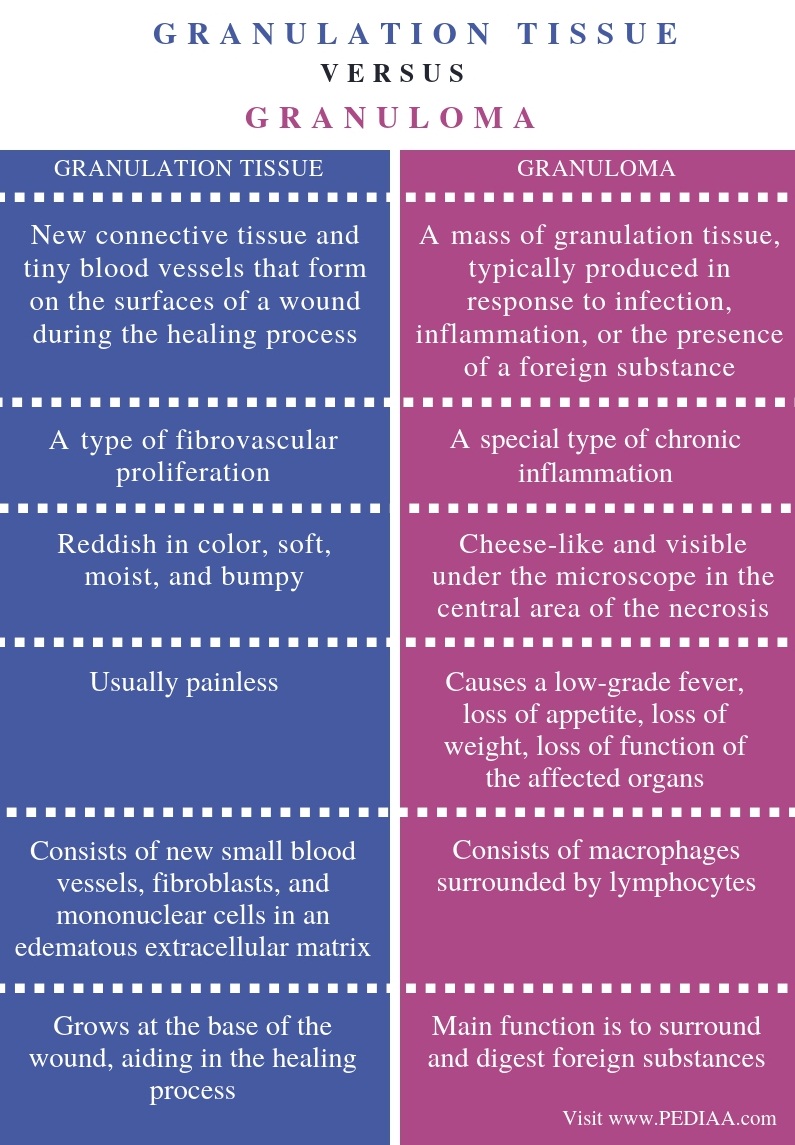 What is Granulation Tissue

Factors responsible for the histological appearance of the granulation tissue are the proliferating fibroblasts, angiogenesis (the formation of new, thin-walled delicate capillaries), and infiltrating inflammatory cells in the loose extracellular matrix. Therefore, the functions associated with different cells in the granulation tissue are the formation of extracellular matrix, vascularization, and triggering immune responses respectively.

Here, the extracellular matrix is mainly composed of the type-III collagen, which is weaker but produces rapidly. Later, the type-I collagen, a long-stranded and stronger form of collagen mainly found in scars, replaces these. Furthermore, macrophages and neutrophils are the main immune cells in the granulation tissue. Their function is to phagocytize old and damaged tissue while protecting the wound from pathogenic infections. In addition, the main function of blood vessels in the granulation tissue is the efficient transport of nutrients and oxygen to the growing tissue while removing metabolic wastes. They also help in supplying new leukocytes to the wound area.

A granuloma is a special type of chronic inflammation. In general, the three features of a granuloma are the persistence infection, the presence of foreign bodies, and the autoimmunity. The gross appearance of a granuloma is characterized by ulceration, thickening of the wall of the hollow organs, and changes in the texture of the tissue forming necrosis or fibrosis. Moreover, granuloma causes mild clinical presentations as well. Some diseases associated with granulomas are tuberculosis, leprosy, schistosomiasis, sarcoidosis, aspiration pneumonia, etc. 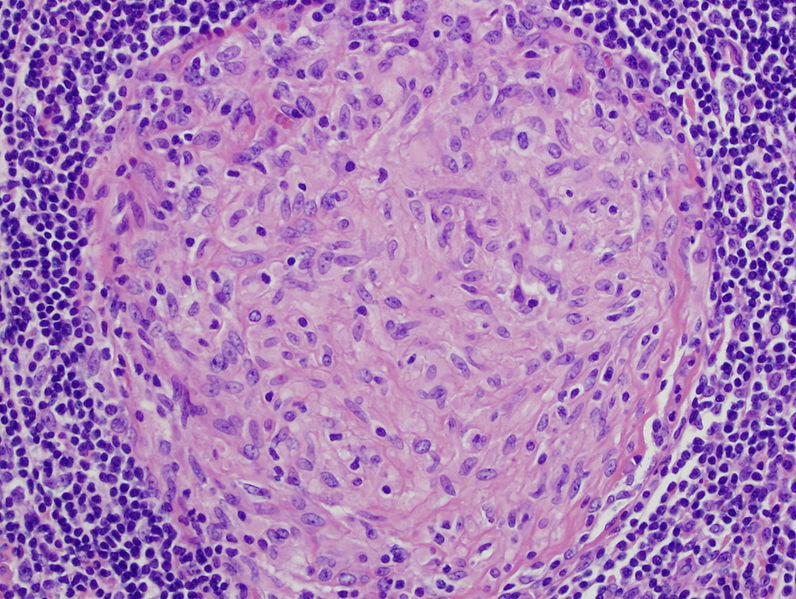 Figure 3: Non-Necrotizing Granuloma in a Lymph Node in the Neck

In a general sense, granuloma occurs with the attempts of the immune system eliminate foreign substance but, unable to do so. This kind of foreign substances can be infectious organisms as well as endogenous substances like necrotic tissue, hair, and keratin.

Actually, a granuloma is a collection of macrophages surrounded by lymphocytes. In other words, a granuloma surrounds the foreign substances. Here, motile macrophages move from the blood to the site of inflammation. These cells are long-lived. The functions of macrophages are to remove debris and trigger an immune response by serving as antigen-presenting cells and producing cytokines. The two main types of lymphocytes in a granuloma are B cells and T cells. When considering B cells, they differentiate into plasma B cells that produce antibodies. Also, they act along with macrophages to serve as antigen-presenting cells. Also, T cells produce cytokines to attract macrophages and other cells in the immune system. Some granulomas may contain giant cells that are epithelioid histiocytes, fusions of macrophages.

Similarities Between Granulation Tissue and Granuloma

Difference Between Granulation Tissue and Granuloma

Moreover, granulation tissue is a type of fibrovascular proliferation while granuloma is a special type of chronic inflammation.

Granulation tissue is reddish in color, soft, moist, and bumpy while granuloma is cheese-like and visible under the microscope in the central area of the necrosis. Hence, this is also a major difference between granulation tissue and granuloma.

The clinical presentation is another difference between granulation tissue and granuloma. Granulation tissue is usually painless while granuloma causes a low-grade fever, loss of appetite, loss of weight, loss of function of the affected organs.

Granulation tissue is a collection of small blood vessels and connective tissue, which forms as a result of tissue repair response. It is important in wound healing. On the other hand, the granuloma is a collection of macrophages surrounded by lymphocytes. It occurs in the middle of necrosis and is a type of chronic inflammation. It is responsible for surrounding and destroying foreign substances. Therefore, the main difference between granulation tissue and granuloma is their composition and function.